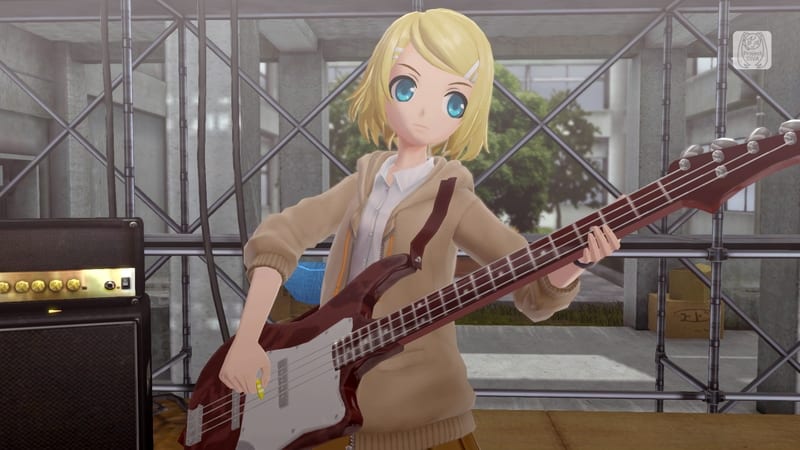 Over the last couple of months we have seen some major video games hit store shelves; with titles such as Assassin’s Creed Unity, Dragon Age: Inquisition and Kingdom Hearts 2.5 HD ReMIX managing to deliver in-depth storylines, complex gameplay and incredibly long play times. This is all good and would usually be something I would look towards when looking to game. However there are occasions when you want to just kick back and enjoy something fun and simple in its approach, yet not mindlessly easy or tedious. Sega’s 2013 localization of Hatsune Miku Project Diva F filled that need perfectly, delivering simple and easy-to-grasp rhythm oriented gameplay (Yet with alterable difficulty settings to appeal to beginners and rhythm-game veterans alike) alongside fantastic visuals and multiple other perks/concepts. Building off their success, Sega have recently launched Hatsune Miku Project Diva F 2nd which is now available on both PlayStation 3 and PlayStation Vita consoles, delivering an experience just as satisfying as its predecessor.

Never heard of Vocaloid? Vocaloid is a singing voice synthesizer, where essentially through the input of text and a bit of musical creativity users can create very ingenious tracks from any genre of music. The voices are sourced from a number of acclaimed voice actors/actresses including Saki Fujita as Hatsune Miku and Asami Shimoda as both Kagamine Rin and Kagamine Len among many others. It is clear to see from a simple Youtube or Google search how this series has boomed. These voices have been supported by representing particular named and designed characters (Rather than “Girl 1″ or “Boy #2″), the most notable being Hatsune Miku. Over the years the community has created many distinct and enjoyable songs using Vocaloid software, with Crypton Future Media even releasing a special “English” version of Hatsune Miku’s voice files which are more inclined towards songs sung in English. In a way, Hatsune Miku Project Diva F and video game iterations serve as best-hits compilations coupled with rhythm gameplay. 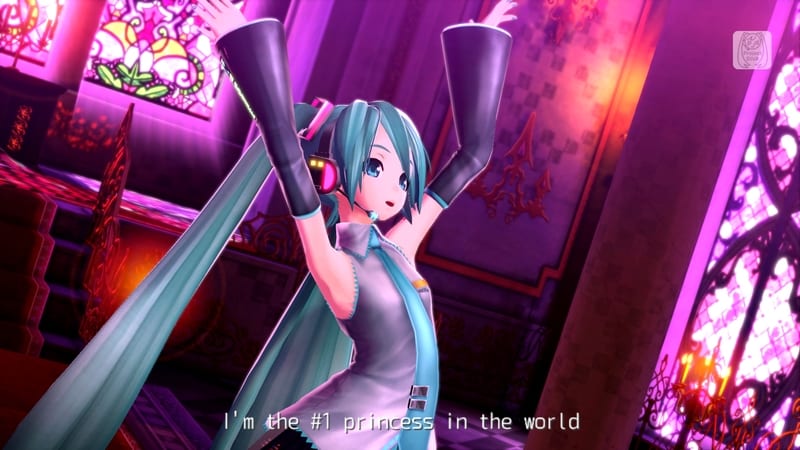 There are approximately 40 playable songs in Hatsune Miku Project Diva F 2nd out of the box, with additional songs available at a cost through DLC. The soundtrack is a mixed bag of songs released both in earlier video game instalments that have never been available outside of Japan and others which are making their video game debut. These range in tone and genre, from the solemn and slow songs that I personally find a real hassle completing to the upbeat and incredibly fast songs that offer a rewarding challenge on any difficulty setting. While a greater number of tracks make use of Hatsune Miku exclusively, there are many songs that are performed by one of the other five Vocaloid performances either solo or as part of a duet: Kagamine Rin, Kagamine Len, MEIKO, KAITO and Megurine Luka. As a rhythm game, Hatsune Miku Project Diva F 2nd offers a strong number and variety of songs, which complement the returning gameplay style.

The gameplay in Project Diva F 2nd remains almost unchanged from its predecessor. Gameplay primarily involves you pressing a mix of the four face buttons on a DUALSHOCK controller in addition to swiping the analog sticks whenever a star shaped icon appears on screen. The button presses are timed as the note passes over a silhouette corresponding to the particular note, and rather than being linear in direction, the notes can fly in from pretty much anywhere on the screen. The only significant change is that in addition to occasionally needing to press the face+directional (Eg. Triangle + Up) buttons for arrow notes,  you may also need to move both analog sticks simultaneously in-time to a large golden “W” star. This may sound easy at first, and on the easier difficulty settings it can be. But when you have notes flying in from everywhere that are correlated to different button presses, it can become very hectic. Not only that, but when you factor in the creative visuals and animations which complement each song and cannot be disabled, keeping your attention on each button press can be an even greater challenge. 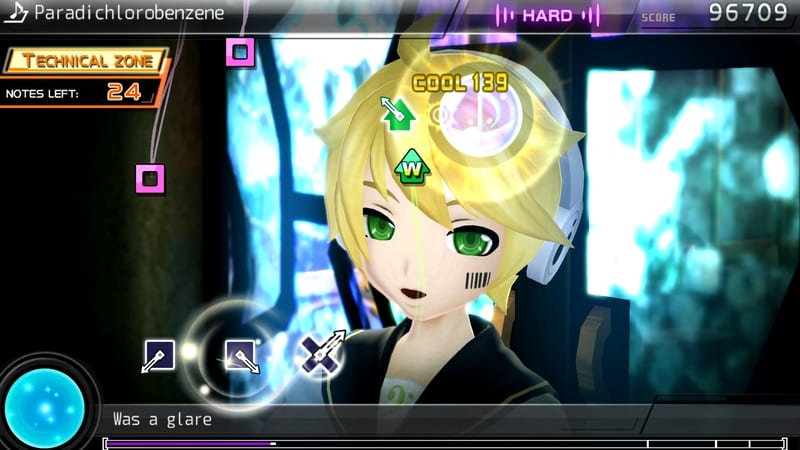 Similar to almost every other rhythm game, you are ranked on each button press depending on how in time with the rhythm you are. These range from Cool and Good which increase your combo tally, to Safe which breaks your combo, to anything below that which both breaks the combo and begins to deplete your Song Energy Gauge. If this gauge drops to zero, the game will prematurely end. Even if a song is completed, you are also destined to receive a “Lousy” grade unless you fill the Grade Gauge at the bottom of the screen by getting your button presses and timing right. In general, you need a score of approximately 80% to get a standard pass grade, so it adds an extra degree to challenge to reach the higher grade tiers.

A number of Technical Zone combo opportunities arise during each stage to help fill the gauge up quicker as well as a “Chance Time” mode where filling up and hitting a rainbow star note will net you a significant amount on your gauge. The downside to these extra chances and zones to fill the gauge are that they tend to favour certain sections of a sound over others. On some occasions these are parts that are less complicated than others and are therefore less deserving of commendation for combo’ing.

Project Diva F 2nd offers four difficulty settings ranging from Easy to Extreme. Especially if it is your first time hearing the songs they can be quite challenging even on the lower settings, therefore the game provides a number of help and challenge items to aid and later challenge players. The help and challenge aids have been given an overhaul since “Project Diva F”, reducing how helpful they are but giving more rewards out should you decide to tackle some of the additional challenges like making all silhouettes smaller or completely randomizing the direction each note flies onto the screen in. Personally, I found that doing a song I was really good at (In my case it was Paradichlorobenzene by Owata-P) and adding some challenges was a great way of earning extra Diva Points (At a rate of +250%). 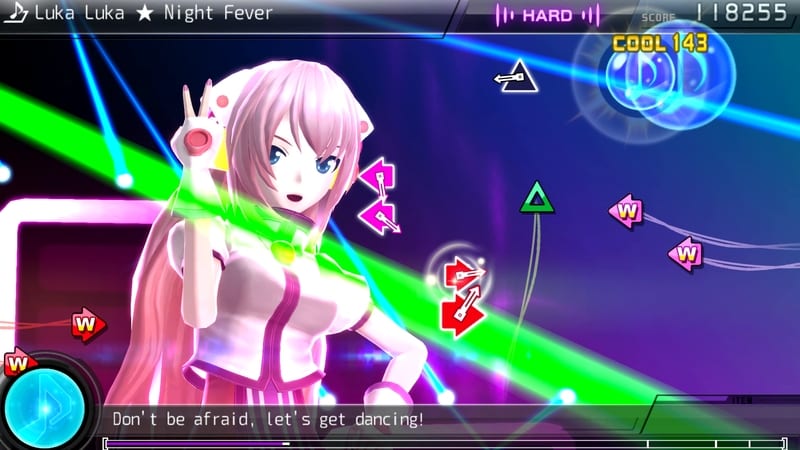 Diva Points are the games reward system, which you can use to buy the characters new modules / accessories (They aren’t free or cheap), items for their rooms or buy items to gain their affection. There is a good variety of items to unlock and subsequently purchase, however Project Diva F 2nd now sets and presents specific requirements on how to unlock items in each song. There are a broad range of requirements which determine how you unlock them, including but not limited to: completing a song once, completing a song X times, wearing a particular module, attaining a perfect score or completing on a particular difficulty. Through my standard jaunt through all forty songs, I found myself unlocking many more modules than accessories, in comparison to Project Diva F where I found it more common to unlock accessories than modules. As before, it is possible to customize the characters and their appearances for each song, which seamlessly integrate into each songs music video without any hassle.

In addition to the core gameplay, the Diva Room system returns once again where you can watch each of the Vocaloid idols carry out their every day activities, watch them interact with goodies you provide and pat them on the head. It is a system that I personally still find boring, but does come with a few rewards and trophies. The Edit Mode also returns, but for the purpose of this review I did not test this system out. One of the new features that I absolutely adore Sega for including is that it is now possible to choose between English and Romaji subtitles for each of the songs. Granted you don’t generally have time to be reading them, however it is good to see that players can watch music videos later on and will be able to fully comprehend the meaning and performed words for most songs* (*Not all songs are localized). 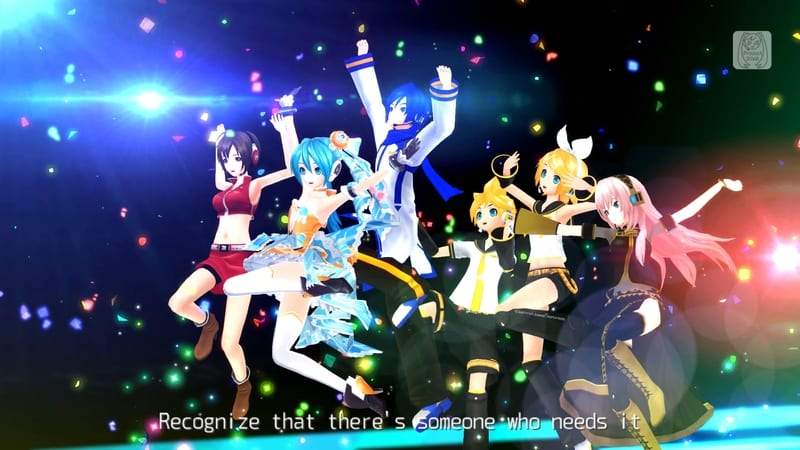 While Sega seem to be focusing more on their core titles, it is great to see the developer/publisher once again deciding to reach out to the more niche community with games like Hatsune Miku Project Diva F and the recently announced Yakuza 5. Hatsune Miku Project Diva F 2nd is just as enjoyable as its predecessor, with gameplay that is easy to pick up and play, but with alternate difficulty settings that can offer a worthy challenge for those after one. Couple its rhythm-genre gameplay with a broad variety of songs and some creative anime-styled 3D animation and you have one incredibly satisfying experience.

I would like to acknowledge that a PlayStation 3 review download code for Hatsune Miku Project Diva F 2nd was provided to me by Five Star Games, who serves as the Australian and New Zealand distributor for the game.