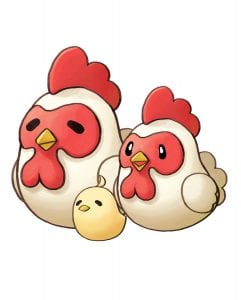 Natsume have recently continued their developer diary series for Harvest Moon: The Lost Valley, with their second instalment involving producer Taka Maekawa who discusses how caring for and raising animals will work within the Lost Valley.

While we were first developing Harvest Moon: The Lost Valley, we called it by a code name: Back to Basics. We’ve applied this philosophy to many aspects of the game, including the animals available on the farm. We went back to the basics: cows, sheep, chickens, and, of course, horses.

The idea is that each animal should feel unique in some way, and to encourage all farmers to keep animals – whether a full-barn veteran or a chicken-coop newcomer. Now, each animal will have its own personality traits, called “skills” in the game. Players can seek out animals with the traits they desire most for their own personal play style; some farmers may aim for a barn with all of the same traits, while others may look for a selection of traits for a balanced barn or coop. They claim that the mechanic of ‘choice’ was really important to them, in order to give players an opportunity to shape their farm in the way they prefer.

Some of the sample traits highlighted include:

Winter/Spring/Summer/Fall: This season is the animal’s favorite! Their affection level will go up faster in that season.

Elegant: These animals really, really hate being dirty! You’ll get a big affection bonus when you brush them. The higher an animal’s affection, the higher quality products they’ll produce, as well as a higher quantity of that product!
Like a particular trait? You can breed that particular animal and get the same skill over and over or, even better, you can breed them into a rare, super version of that skill! Here’s a few skills, and how they level up:

Great Goods becomes High-Quality Goods: These animals have a strong and powerful body! Because of that, they will sometimes produce higher-quality products.

More Goods becomes Super Goods: These animals are gifted with fantastic health! Because of that, they will sometimes produce a higher quantity of products.

Even if you don’t have an animal with your preferred trait, there are ways of having them learn new skills. There are a number of different animal feed types that can be made, with some teaching unique skills to whomever eats them. Maekawa is however keeping his lips firmly shut at the moment on how one would go about producing the feed.

Harvest Moon: The Lost Valley is set for release exclusively on the Nintendo 3DS later this year.