As part of a wise decision made by the team at Sony Computer Entertainment, when picking up their Playstation 4 all gamers have access to a 14-day Playstation Plus membership which unlike the Xbox One system at this current time, has provided two free next-generation releases for free straight off the bat. With the loss of DRIVECLUB under this system which was replaced by Contrast, the only opportunity to showcase a self-published title was through Resogun, developed by Housemarque and published by Sony Computer Entertainment exclusively for the console.

While you may be expecting a staple title when you think about a complementary launch title, Resogun is instead a rather challenging side-scrolling shoot ’em’ up which has shaped up to be a very strong title. Sure it may not appeal to the more casual market that don’t seem to have been much of a focus with the next generation console launches, but for everyone else could offer many hours of entertainment. 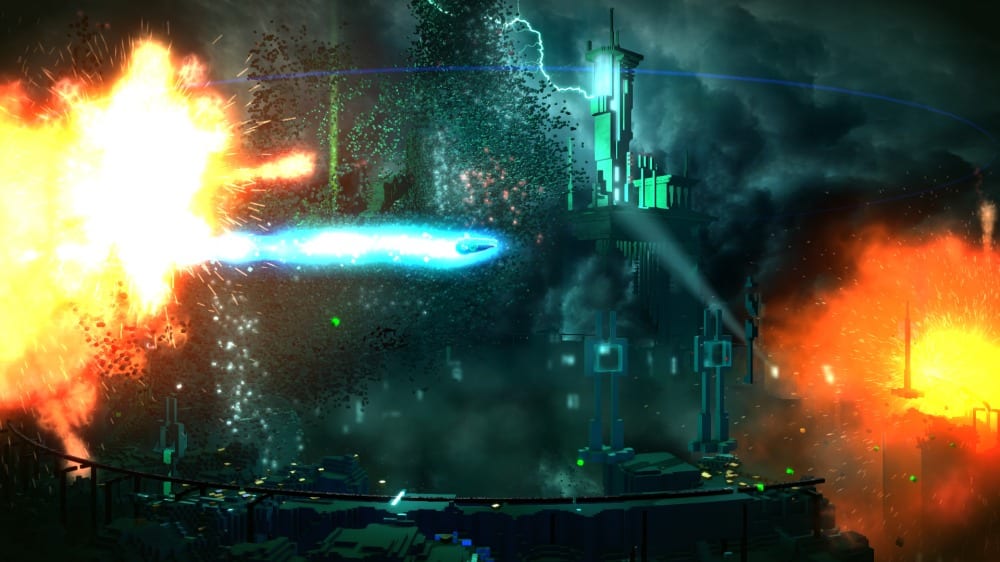 Resogun is the sort of game that rewards you the more that you play into it. Each of the games stages take place in a circular environment surrounding a particular structure, which as the minutes progress slowly begins to crumble away in masses of tiny cubes due to the damage that takes place in your battle arena. As the battle zone completely surrounds this structure, you get to see it crash and burn from every angle, delivering an aesthetically impressive experience.

While your ship design is relatively simple, you are pitted up against masses of the same types of enemies that lack variety. However the game makes up for this by handling masses of them which adds not only considerable challenge but plenty of opportunity to see more than a few series of explosions. The boss battles that take place at the end of each stage are mechanical monstrosities, that each offer individual styles and unique play strategy. Given that your attention needs to be on the waves of enemies at hand it doesn’t go overboard with the visual design, but what they have presented worked well.

Resogun features a small but appropriate set of techno-inspired music which works well with the intense, futuristic environments presented to the viewer on screen. Voice acting however was lacking, aside from a few female voice snippets when the game wants to draw your attention to something. These voice snippets however were delivered not through the television but the controller which was a nice little feature. 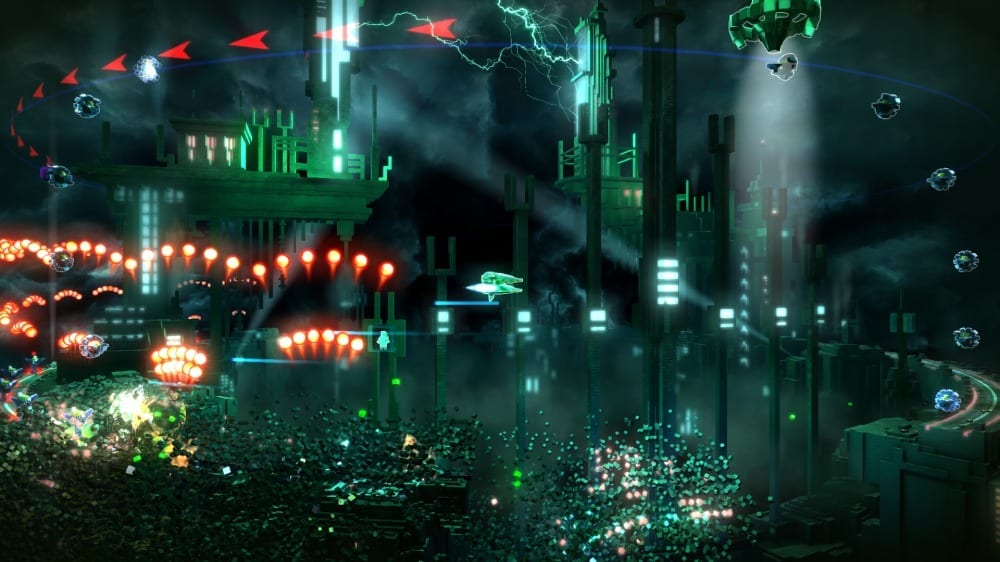 While the gameplay style is completely different, Resogun reminds me of the 2008 Playstation Network title The Last Guy that was developed and published by Sony Computer Entertainment Japan. In TLG, you played as an unnamed character who had to face adversity while rescuing people trapped in an environment that is soon to be dystopic through zombie / monster infestation. In Resogun you play as an individual or individuals piloting a space ship in an environment that is soon to be destroyed – and are faced with having to not only protect your vulnerable ship from being destroyed but also rescue ten “Last Humans” who are trapped in cubes around the stage.

Flying the ship is an easy enough process with the left thumbstick to move and the right thumbstick to fire bullets in either the left or right directions. There is also the option to dash, perform an overdrive attack (Both of which recharge over time) and use one of your bombs to take out any enemy on the field. You are faced against swarms of enemy characters that can be taken out with either a single shot or multiple shorts and either act alone or can act in a swarm of a several-dozen member closely packed squad. All the while you have to avoid being hit yourself, as the ship you have been provided with is delicate as well.

Ten times during the stage a group of guardians will appear, requiring you to jump into action and take them out to free one of the “last humans”. These humans are vulnerable and after being freed you have to drop everything and get them to one of the two save zones in the level, lest they either be captured by an alien force or (In the later levels) plunge down to their death through a conspicuous hole. While not necessary to complete a stage surprisingly, they do net some sizable point bonuses for the high score tally and provide you with extra goodies such as extra lives, bombs etc. These bonuses are in addition to weapon and overdrive enhancements that are unlocked as you progress through each of the stages, with the weapon enhancements being particularly notable, going from a single flimsy beam to something that shoots multiple beams in your target direction to provide much exploding epicness. 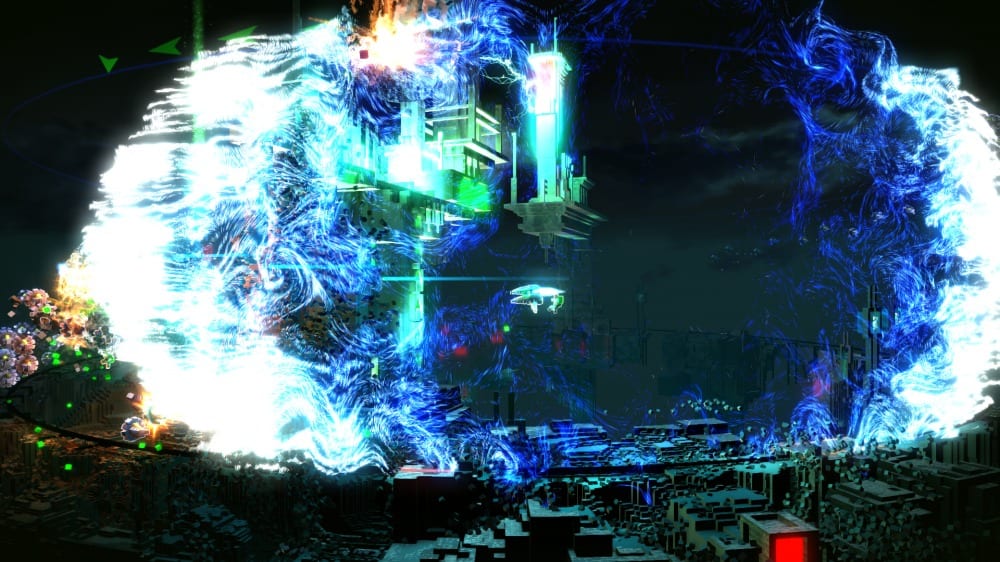 Resogun is split up into five stages, each of which are further split up into three phases and introduce different enemy threats into the mix each time. Despite there only being five stages, aside from the aesthetic change there are only a few additional hazards that mark each of the stages – and the four difficulty tiers mean you do technically get twenty different stages. You can choose to play each individual stage as a single or go the long haul with your classic Arcade Mode experience – all five stages on one difficulty level with shared resources (Bombs, Lives etc). A set shouldn’t take you longer than an hour to complete and provided you haven’t set the game too easy for your proficiency it should be an intense hour!

There is also an online multiplayer mode offered for the game, however after several attempts to test it for this review I was unable to find any other players. Resogun really required a proper lobbying system for those who may not have friends willing to play the game with them.

In short bursts Resogun is a perfect example of what I have come to expect from the smaller downloadable video game titles, and I think it was a fantastic decision to include this title as part of the very first PS4 Playstation Plus ensemble. With the significant range of difficulty tiers available to choose from, there is often room to improve in a subsequent round – coupled with online leaderboards and a few challenging unlockable trophies to add to the deal.