CCP Games have just announced that the players of EVE Online have donated enough PLEX to the “PLEX for Good” campaign to raise a total of $190,890 USD to aid the Icelandic Red Cross in supporting the victims of Typhoon Haiyan in the Philippines. This translated to 12,726 PLEX which if used by users, would translate to around 1,060 years of game time.

The drive culminated on December 7 in an 8+ hour “telethon” live-streamed on Twitch featuring EVE Online developers who pledged unique donations as fundraising milestones were hit, including developer boxing matches, male and female head-shaving, getting a full-arm tattoo, sparring versus a Tae Kwon Do champion and even getting shot with one paintball for every US$2,000 donated. Other programming included a guest appearance and “training session” by mixed martial arts phenom Gunnar “Gunni” Nelson, a developer cooking competition, Q&A sessions and a live sampling of the most exotic tastes of Icelandic cuisine.

We often talk about how EVE is ‘real’, a simulation of humanity where there are few rules and all the economic, political and social forces of human nature push the boundaries of morality in all directions. We’ve seen the passionate side of our players over the past decade, but truly nothing could prepare us for this level of generosity from them. It is humbling. It is beautiful. It is what EVE is really about. 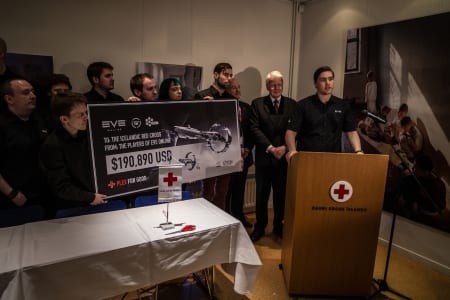