I was now several hours into Need for Speed Rivals and had gone through the tutorials for both Cops and Racers, familiarized myself with both and at the time had pledged my allegiance to the Racers. My ride was awesome, as I had artistically and financially pooled my efforts into building my new car with the number plate “OTAKU”. After winning races, outrunning cops and going through the repair shop more than a few times I had acquired a heat score up to eight (out of a possible ten), over 200,000 speedpoints and was headed to the nearest hideout to cash in my haul.

But it was not to be… no more than a kilometre away from my destination I was set upon a swarm of player and (assumingly) CPU cops, was having my every move tracked by a helicopter and the durability to my vehicle was incredibly low. With no means to escape I could only drive forward hoping for another racer to use as a scapegoat… but it never arrived. Half an hour of work was gone in mere minutes, but I loved every second of it.

This is the thrill of the new AllDrive system introduced in Need for Speed Rivals… no longer are you confined to instanced missions or a lonely open world – but are given free reigns of the open roads in an online universe. This means your single player experience could very well be changed in a matter of moments when some other player in a cop car chases you down or a racer decides they want to go up against you in an impromptu race. With this serving as the 20th installment in the racing franchise since back with The Need for Speed in 1994, the franchise needed an overhaul, and while retaining many features present in earlier releases emphasizes the online aspect and does a fine job of it. 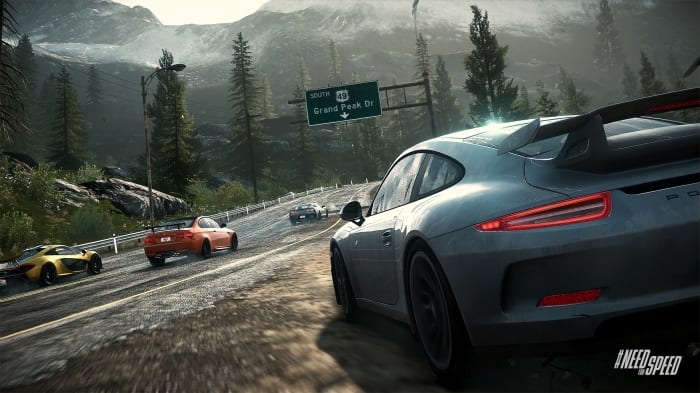 Similar to earlier titles there are two warring groups – the Racers and the Cops, each of which provide a considerably different gameplay experience. As a Cop, you may be seen as a force to “ruin everyone’s fun”, as the primary objective is the track down and bust Racers using any means at your disposal – smashing into them, teaming up against them or using a number of special abilities “Pursuit Tech” against them. This I found was the easier of the two to get into given the lack of risk in losing speedpoints, not being under constant attack and even sloppy driving can be made up for by crashing into a few vehicles. On the downside however, there is a lack of personalisation options with cop cars.

On the other side of the scale, being a Racer provides you with a variety of cars that can be customized from the paint colour down to the number plate design / wording. As a Racer your role is to speed and run amok – racing other players you come across, speeding as fast as possible and avoiding the cops that go up against you at any costs. As alluded to above, while it is relatively simple to make a reasonable sum of speed points as you undertake regular activities, the higher your Heat Level or notoriety rises, the greater risk you are in and may result in you losing it all.

You can do events without online players, and the game provides you with several events for each class. For the Cop you have the option of undertaking an Interceptor mission (A “cat and mouse” game between cops and a CPU player) while for the same mission as a Racer you will have to evade CPU’s and potentially player cops and escape from them tailing you. Both classes offer their own individual missions as well, and can also be joined in by other players if at the same starting line. These remain separate from impromptu pursuits or “Head to Head” races that can be started with a click of a button, and require you to go to a specific section of the world map to undertake. 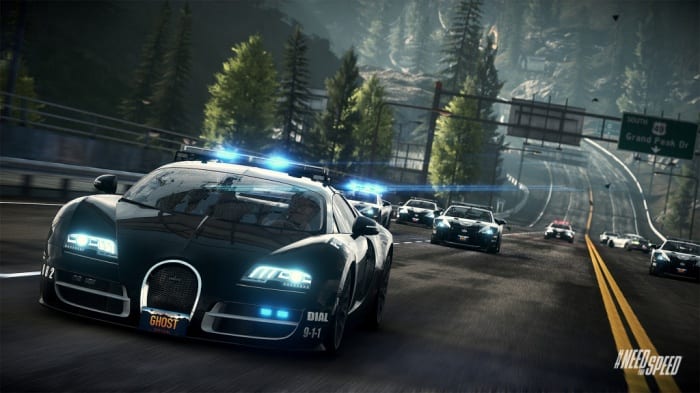 While you are given some degree of personalisation of the cars on offer in the Racer career path, both Racer and Cops are given access to Pursuit Tech, weapons of sorts that can be used to give either part the edge when coming across someone else on the streets of Redview County. Purchasable through SpeedPoints, up to two of these can be added to the car ranging from EMP devices to deliver an electrostatic pulse, a helicopter to have spike strips dropped ahead of racers during your pursuit or a Turbo device allowing a racer the capacity to speed ahead of everyone. Unfortunately there are very few of these on offer, and a greater variety of them or even the ability to further customize them to your specifics would have been a welcome addition.

To gain cars you require your rank to increase, however your actions in the game directly have no impact on how you level. Instead, at the beginning of every rank you will be presented with a set of three “speedlists” or objectives to choose from, and no matter how amazing you perform on the road, you will need to complete that set of tasks to level up. These range from achieving a bronze metal in a particular event to using a particular number of pursuit tech’s against X, Y number of times. I still remain undecided where I stand on this decision, but at the very least it does get you potentially doing new things.

Redview County is huge, and even at high speeds will take you a considerable amount of time to get from one side to another. The county is also ecologically diverse and contains everything from a snowy hillside to a lush forest to a plain desert. While I question if it will appeal to those who wish to go the long haul to max out their rank for both Racer and Cop, it is diverse enough that my many hours playing in it always seemed to offer something new. There are also different “times of day” changes and dynamic weather patterns that can to some degree impact your racing experience that need to be catered for. But while a very pretty place, Redview County felt to fall a little short when it came to the Racer evading the cops. While I personally saw and used a number of strategies used to outrun them, there were sometimes long stretches of road which offered little to give them the slip  and would have benefited from more side streets or more than the bare minimum of vehicles to serve as greater hazards for both parties.

My experience in Redview County was sometimes brought into question however. There were times where I could easily find another player to race with or hassle, but other times when I could drive considerable distances and not find a single other player. 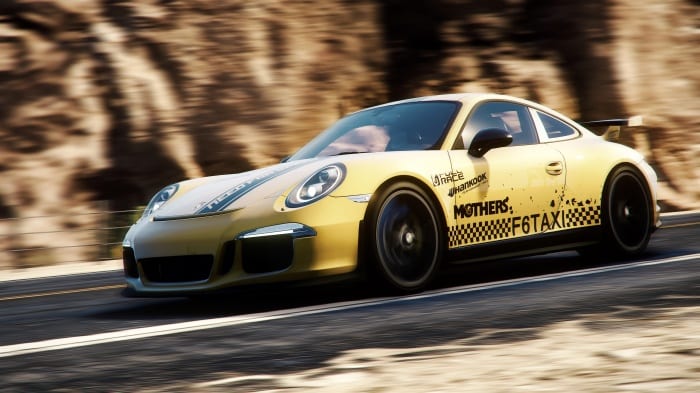 Need for Speed Rivals loves to flaunt its car designs, and after the hard yards to rank up and unlock the ability to purchase a car, they provide a short 15 second segment showcasing a number of the design features put into a cars design. While I would never have said no to more variety, there is a good selection of cars – both new and slightly older – that should appeal to a variety of gamers. The cars can show wear and tear during your escapades on the road, but a notable issue I had was that when crashing, the game shows a brief crash clip of the car. In more than one occasion I had visibly broken the back window of my vehicle, but it instantly repaired itself the moment I was let back on the road.

While you may be left with a consistent stream of car revving noises, the in-game radio features a sizable compilation of licensed music for your listening pleasure when driving down the road without any hassles. The game does drop you out of the track however when in a pursuit, and while intense could have used a greater variety of them. To also simulate the experience, the police radio will occasionally shout out warnings pertaining to yourself (as a Racer) or Racers in your vicinity (as a Cop), which gives you audiological warnings in addition to the visual ones acquired on your GPS.

While they did try to cram in a few other features into the game such as iOS / Android integration through the Need for Speed Network and Overwatch, these just served as icing on the cake for what proved to be one of the more entertaining and intense online game experiences I have personally had in quite a while. Featuring a beautiful open world environment and a growing player base, every gameplay session offered something memorable. Need for Speed Rivals is just what the long-running series needed, playing to its strengths but embracing the next logical step from its recent predecessors. Flawless? No. Memorable? Yes.