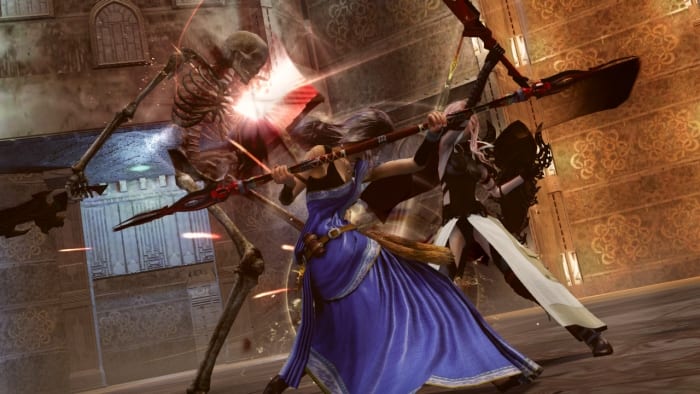 Square Enix have recently shared a new batch of screenshots for Lightning Returns: Final Fantasy XIII, this time focusing on Oerba Yun Fang, who was a playable party member in the first Final Fantasy XIII game.

For centuries, Fang and Vanille slept within said crystal pillar, holding Cocoon aloft in the sky, however after the events of X-2 they were rescued. However they awoke not to the world they left but the world as it is now…. At first, the pair lived under the care of the Order, until Fang set out to the Dead Dunes, a barren expanse of desert within Nova Chrysalia, in search of a long-lost relic. She did not return.

Fang and Lightning eventually reunite and team up to explore the ancient ruins that lie buried beneath the sands of the Dead Dunes. When battle erupts, Fang fights by Lightning’s side, and the pair can easily take on foes that would be extremely difficult to defeat alone.

The screenshots also highlight a new gameplay system known as the “Last One”. In the world of Nova Chrysalia there is no one born. The game is said for monsters and there remains only a limited number of each species.When Lightning slays all of one species, they become extinct, never to be seen again. The last survivor of a monster species is known as the Last One. It is extraordinarily powerful, far more so than its defeated predecessors. When the Last One is defeated, the species is extinct… although some monster species can never be eradicated completely.

Facebook
Twitter
ReddIt
WhatsApp
Pinterest
Telegram
Previous articleNew [email protected] Game – The [email protected]: All For One Confirmed for Playstation 3
Next articleUbisoft Australia Auction Off Portrait of Assassin’s Creed IV: Black Flag for A Little Over $1,225 AUD – Proceeds Go to the Starlight Foundation