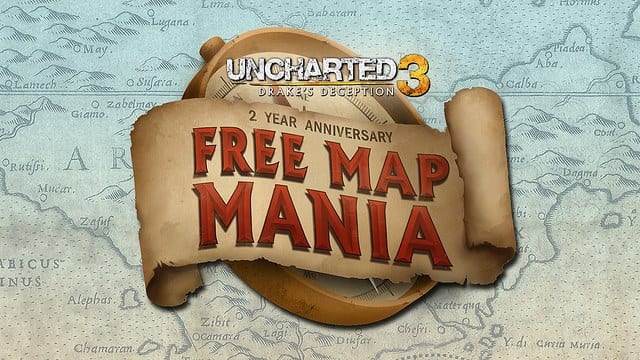 It has been two years since Sony’s first-party development studio Naughty Dog launched Uncharted 3 on the Playstation 3. Unless they are releasing this to dead servers, the games multiplayer online servers still seem to be going strongly enough to warrant game updates – and that is what they have in store to celebrate this new milestone.

They are describing this update as being “an epic patch that rivals patch 1.13”, and upon other things includes a new map and all the other multiplayer maps for free. The new map is the Dry Docks, with Lead Game Designer Robert Cogburn sharing:

When the Dry Docks map was pitched as a single player level for Uncharted 3 the talented Game Designer Junki Saita was working on a number of setups for the level.  All these level setups were represented in a blockmesh format – this is a 3D representation of a playable space using rudimentary geometry made in Maya (the 3D program we use at Naughty Dog). We’ve shown a number of maps like this for Uncharted 3 Multiplayer via our Block Mesh Lab Maps.

One setup in particular Junki was working on showed a lot of promise for a multiplayer map so I grabbed the blockmesh and started editing it for competitive multiplayer. After some time had passed, it was determined the setup for single player would not be used and instead the single player layout you see in the final version of the game was completed.  This meant what I had done to make Dry Docks would ONLY be used for multiplayer.

Making games is very time consuming so you cut things that make sense. It made sense to not have our art team invest time in taking the multiplayer version of Dry Docks to the level of quality we adhere to at Naughty Dog – therefore the Dry Docks map was cut.

A little less than two years passed and the map was forgotten.

With the two year anniversary for Uncharted 3 and its multiplayer, and the number of cool things we are doing for 1.18, we decided to resurrect this map and release it to our fans. It’s quite different from the original version but the changes we’ve made has made Dry Docks all the better.
We hope you enjoy it.

Want a full list of all the goodies on offer in the latest update?