It seems like Disney Interactive have been working their way into the mobile and browser gaming markets over the last couple of months, with their recent release Pirates of the Caribbean: Isles of War making its way to the Facebook app platform. They describe this title as an “online Facebook experience founded in the lore of the hit films”.

Players engage in real-time naval combat against other players and AI pirates as they build a reputation to be the greatest pirate in all of the Caribbean. Joined by Jack Sparrow, Davy Jones, and Hector Barbossa, players will build their base, expand their fleet and rule the high seas; whether through trade or plunder—the choice is theirs. Given that all three were at odds during the films, I do wonder if all three will help – or if they will try winning you over to their side. 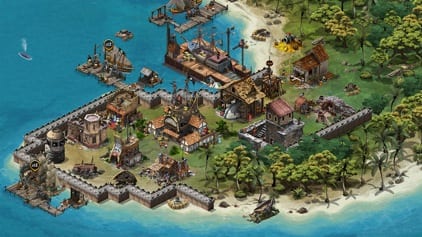 Finding adventure on the high seas is a dangerous, but possibly prosperous, proposition. Victory in combat will bring spoils, while defeat will force the player’s fleet to return to base for repairs, although a ship will never be truly destroyed. As players build stronger bases and fleets, more powerful enemies with greater rewards can be unlocked and discovered by truly intrepid pirates.

Some of the promoted features of this release include: