Over the last couple of weeks, The Pokemon Company International have been busy promoting their new Mega Evolutions and new Pokemon to be featured in their upcoming release of Pokemon X and Y editions, the sixth formal generation of Pokemon games for the Nintendo line of consoles. 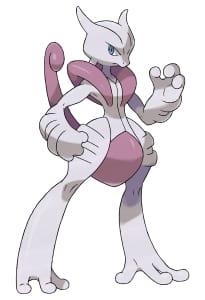 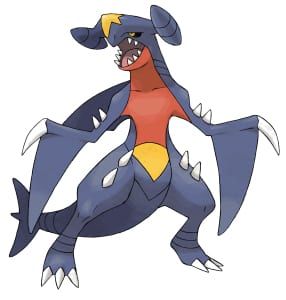 If you haven’t already guessed it, the names of each of the games indicate which of the two Mewtwonite stones you receive. Mega Mewtwo X gains the fighting type to go along with its Psychic type while Mega Mewtwo Y has its special attack skill greatly boosted. While previously shown artwork of Mega Mewtwo corresponds to its “Y” Mega Form, pictured above left is the X form.

It has also been confirmed that the already powerful Dragon- and Ground-type Pokémon, Garchomp, can Mega Evolve into Mega Garchomp in both X and Y. The increased energy released by its Mega Evolution turns Mega Garchomp’s arms into huge blades that send out a furious attack. Mega Garchomp’s Attack and Special Attack are greatly increased after it Mega Evolves, so its Dragon-type move Dragon Claw becomes extra ferocious. 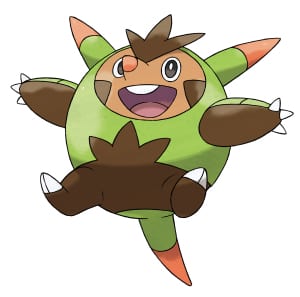 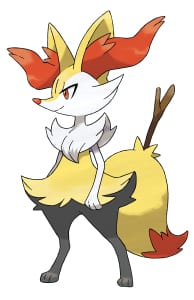 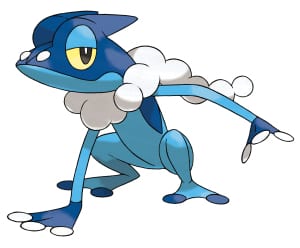 In addition to being able to choose between three first generation starter Pokemon (Bulbasaur, Charmander or Squirtle), your character will be able to choose their partner Pokemon from Chespin, Fennekin and Froakie. The first evolutionary forms of these three have today been confirmed:

When Chespin evolves into Quilladin, the hard spikes on its body grow even sturdier, and it’s able to withstand the impact of even something the size of a tractor-trailer truck without flinching. Its solid shell repels attacks while it strikes back with its pointed spines. The gentle Spiny Armor Pokémon never seeks out battles on its own, but when an opposing Pokémon strikes, it fights back! It can learn the Ground-type move Mud Shot, which does damage to opponents and lowers their Speed. This move is super effective against Fire-type Pokémon, which are usually tough opponents for Grass types like Quilladin.

Braixen is the evolved form of the Fire-type Fox Pokémon Fennekin. Players will notice that Braixen keeps a small twig tucked into its tail. Fennekin often snacks on a twig, but Braixen uses it in another way—the twig calms its mind and is also sometimes used in battle after being set aflame with a little friction. Braixen can learn the Psychic-type move Psyshock, a special move that deals damage based on the opponent’s Defense, as if it were a physical move. Players will want to use Psyshock on opponents that have high Special Defense.

Froakie has awesome jumping skills that are greatly improved when it evolves into Frogadier. This Bubble Frog Pokémon can reach to the top of a 2,000-foot tower with ease and eludes its opponents by leaping around ceilings or into trees. Frogadier can learn the Flying-type move Bounce, which sends the user into the air on its first turn so it can attack on the second. Bounce is super effective against Grass-type Pokémon, which often pose a challenge for Water types like Frogadier. 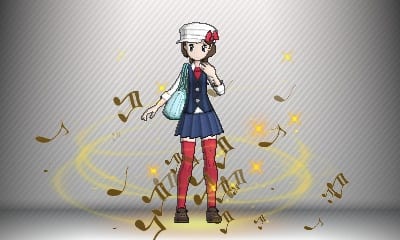 Second Generation game Pokemon Crystal first unlocked the doors to having a female trainer over the generic male offering. Despite this change, there has never since been any further option in customizing the trainers appearance further. With Pokemon X and Y being on the Nintendo 3DS now and them to an extent ditching the sprite-based system all other games have used, they are offering the ability to customize your trainers appearance.

Players can visit boutiques and a salon to change their Trainers’ outfits and hairstyles. You can change your clothes, hat, shoes, and accessories to show off your individual style and put together different looks. There are boutiques in many of the cities throughout the Kalos region, each with its own unique style. Adding to this customized feature, when players change their outfits and hairstyles, their icons on the Player Search System (PSS) update too! With any luck this means players won’t be locked into a selection of trainer types when battling online. 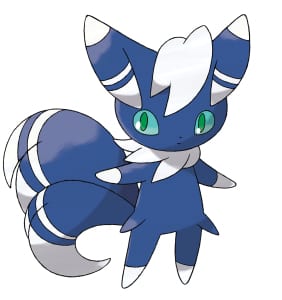 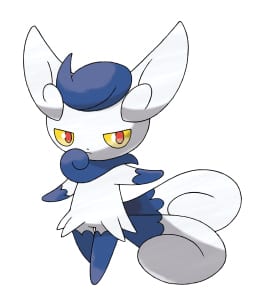 The stylish Poodle Pokémon, Furfrou, can be groomed into a number of different appearances. The more it is groomed, the more styles may become available, some of which are being shown for the first time today. Players will be alerted to Furfrou’s grooming schedule, and if it’s left untended, its fur will grow long and shaggy, returning to Furfrou’s original look. This Pokémon is very intelligent and loyal to its Trainer, and it’s said that in ancient times Furfrou guarded the king of the Kalos region. Furfrou can learn Baby-Doll Eyes, a new Fairy-type move debuting in Pokémon X and Pokémon Y that allows its user to go first regardless of Speed and can lower the opponent’s Attack stat.

Meowstic (Pictured Above) is a never-before-seen Psychic-type Pokémon that has different forms depending on its gender. This expressionless Constraint Pokémon does not show emotion to others, but it seems that some Trainers love the unsociable front it puts on. Unlike other Pokémon that have different forms based on gender, the moves Meowstic can learn will differ based on whether it’s male or female. Male Meowstic can learn the Psychic-type move Miracle Eye, a move that allows future moves to hit regardless of the opponent’s evasion, making it a powerful support in battle. Female Meowstic are better at outright attacks and can learn the Psychic-type move Extrasensory, which not only does damage but can also cause the target to flinch so it can’t use moves on that turn. 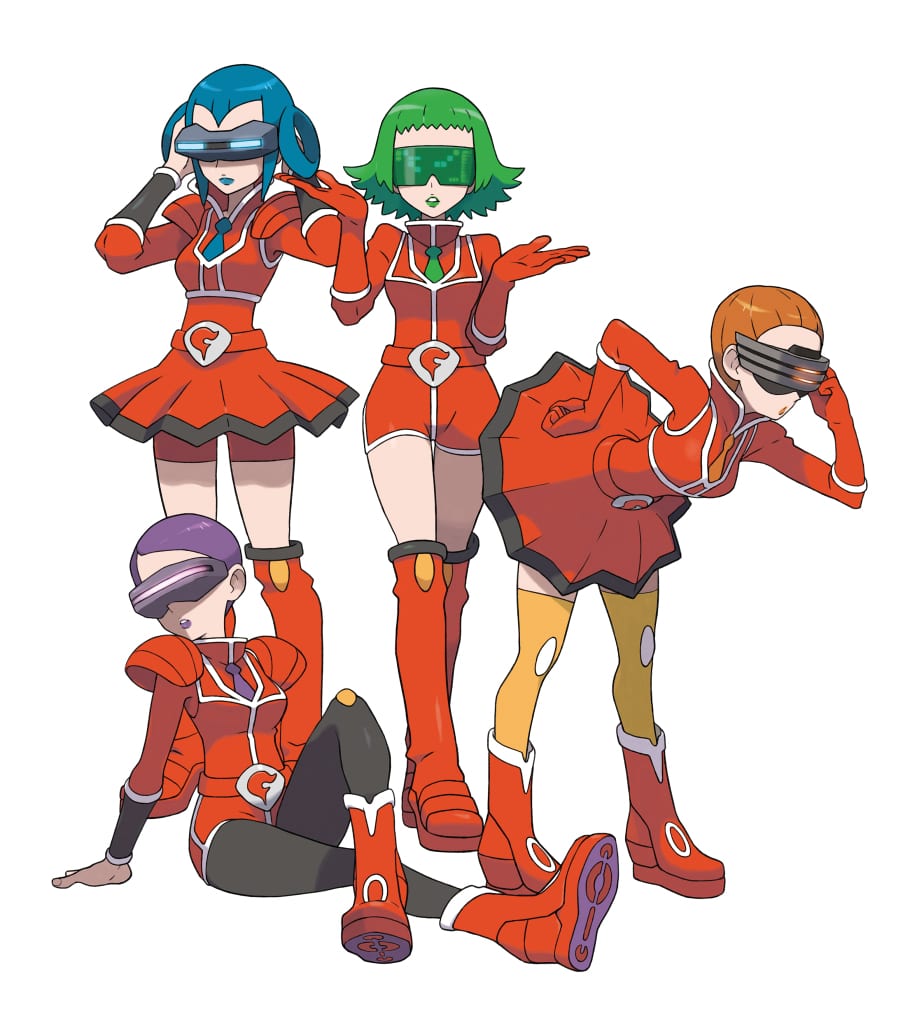 Last but potentially not least are details relating to more characters who will be making an appearance during your journey around the Kalos region.

First up is more information about Team Flare, who following the naming structure of previous games may give you a hint as to their role (Hint: Most likely antagonistic). Five Scientists pictured above are believed to be the driving force behind this mysterious group, each one identified by a different hairstyle and unique outfit. The purple-haired woman is Celosia, the orange-haired woman is Aliana, the green-haired woman is Bryony, and the blue-haired woman is Mable. There is one man among the Scientists pictured below, Xerosic, who is easily identifiable by his red goggles and fire-red hair. Their focus is world-changing, and they have a clear goal in mind, but what is it?

To the bottom right is a more friendly character (assumingly). Everyone in the Kalos region loves Diantha, a famous movie star Trainers will meet during their journey. In addition to her acting career, Diantha is a Pokémon Trainer, though she seems to show more interest in other Trainers who have real potential. 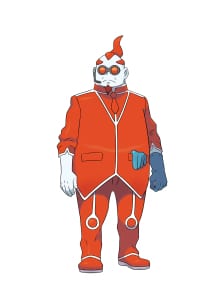 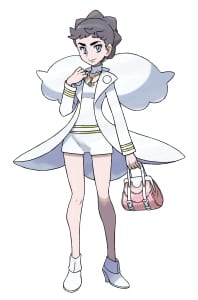