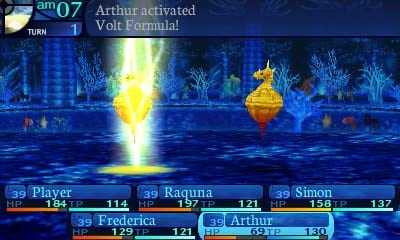 While ATLUS USA have been releasing a mixture of gameplay and character screenshots for their upcoming release of Etrian Odyssey Untold: The Millennium Girl, they have decided this time around to do something a bit different… sample the music.

In my review of Etrian Odyssey IV: Legends of the Titan I noted as one of the highlights that the game had a “Strong Soundtrack”. ATLUS USA seem to think that Untold will also have its soundtrack well received and have shared a single battle theme track from the game available for your listening below.

Etria is a land that has long welcomed explorers…yet even they will discover stories untold.

Uncover the truth behind the labyrinth that swallows all. By choosing first to immerse yourself in Story mode, you will encounter the maiden who has lived a thousand years and the growing mystery that surrounds her past—a past that may affect the present and future of Etria.

Should you brave Classic mode, you will experience the beautifully upgraded version of the original Etrian Odyssey adventure, with new 3D graphics and gameplay improvements as seen in Etrian Odyssey IV, as well as a live and FM synthesis BGM to accompany your journey. Scour through the dungeon’s many layers and fend off the unknown to discover the truth behind the Yggdrasil Tree.

Choosing either mode will unravel the engrossing tale that signaled the start of the grand Etrian Odyssey series. How will the newest generation of explorers fare in unearthing Etria’s latest tale?