Despite having many other titles already under their belt and yet to be released, XSEED Games (Which recently became the console publishing brand of Marvelous USA) have today announced that they will be publishing the battle adventure game, Senran Kagura Burst, on the Nintendo 3DS via digital distribution channels later this year in North America.

It’s all about girl power in this over-the-top side-scrolling action game that spawned a successful anime and manga series in Japan. Senran Kagura Burst is set in an academy which serves as a front for an underground school where female students are secretly trained in the art of ninjutsu. Consisting of two separate storylines, Skirting Shadows: Introducing players to the “good shinobi” of Hanzō Academy and Crimson Girls: Which turns the tables to tell the same tale from the rival Hebijo Academy’s point of view. 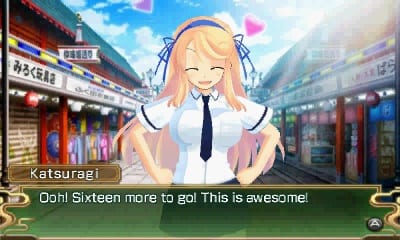 Players assume control of the five primary female characters in each academy who aspire to become full-fledged shinobi. Within the “Ninja Room” hub located in each academy, character interactions reveal the thoughts and feelings of the students before and after each game mission. Novel-style story scenes then precede other missions, offering a deeper look into the world of Senran Kagura. The drama of the battle adventure unfolds as players complete combat assignments for each of the main characters, including retrieval missions, multi-character battles and epic boss fights. During combat, damage to the girls is revealed through the gradual destruction and removal of their shinobi outfits.  The original Japanese voice-overs have been left intact and will be accompanied by English subtitles.

Players can earn experience and level up throughout the story, unlocking new moves, powers and outfits. The Nintendo 3DS system’s stereoscopic 3D capability is fully supported, allowing Shinobi Transformations, special moves and victory poses to be viewed in full 3D.

No PAL region publisher for the game has yet to come forward. More news will be available via The Otaku’s Study if or when this information is known.