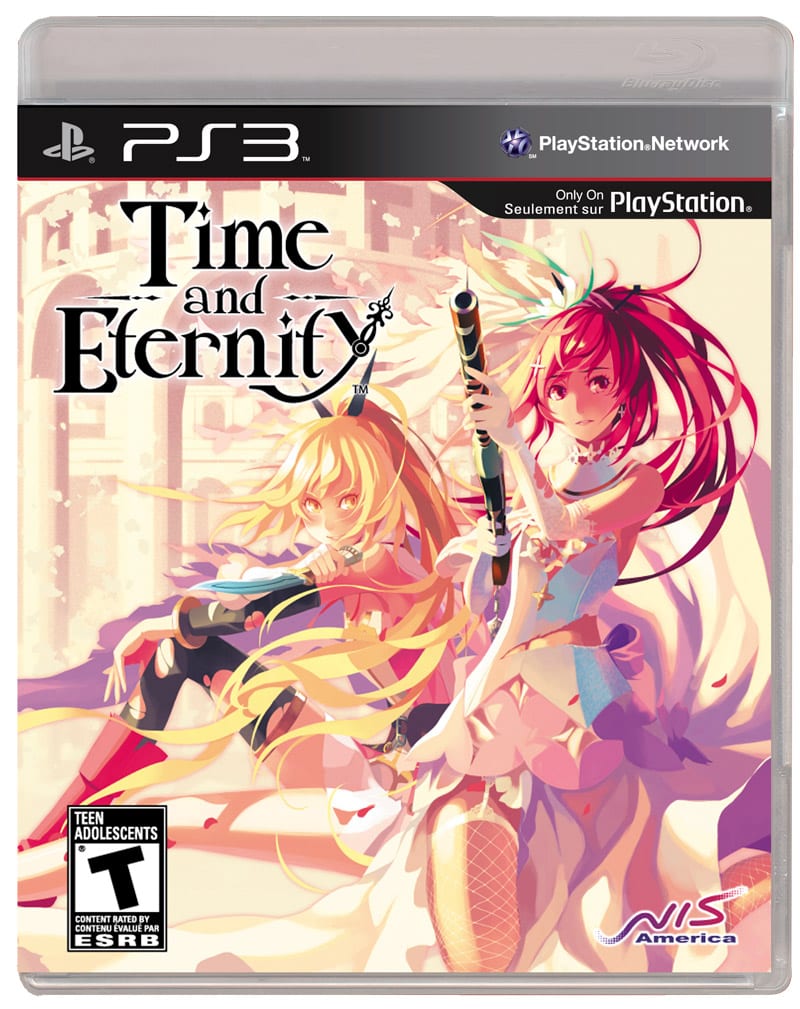 Title: Time and Eternity
Developed By: Namco Bandai, Imageepoch and Studio Satelight
Published By: Nippon Ichi Software America
Based On: New IP
Console: Playstation 3
Genre: RPG
Classification: This title has been rated M for Sexualised Images
Review Conditions: North American Edition, Playstation 3, Digital Copy
Special Thanks: NIS America for providing me with a copy of this title for review

Kamza, a vibrant kingdom located on a lush ocean island, is in the midst of a national event celebrating the upcoming marriage of their princess to a valiant knight. But when a group of assassins appears during the ceremony, this dream come true transforms into their worst nightmare. As the knight lays mortally wounded, the princess reveals her long-hidden secret—there is a second soul living within her, and together they control the power to travel through time. But can they act quickly enough to reverse the course of history and find out what happened that fateful day? Only time will tell… 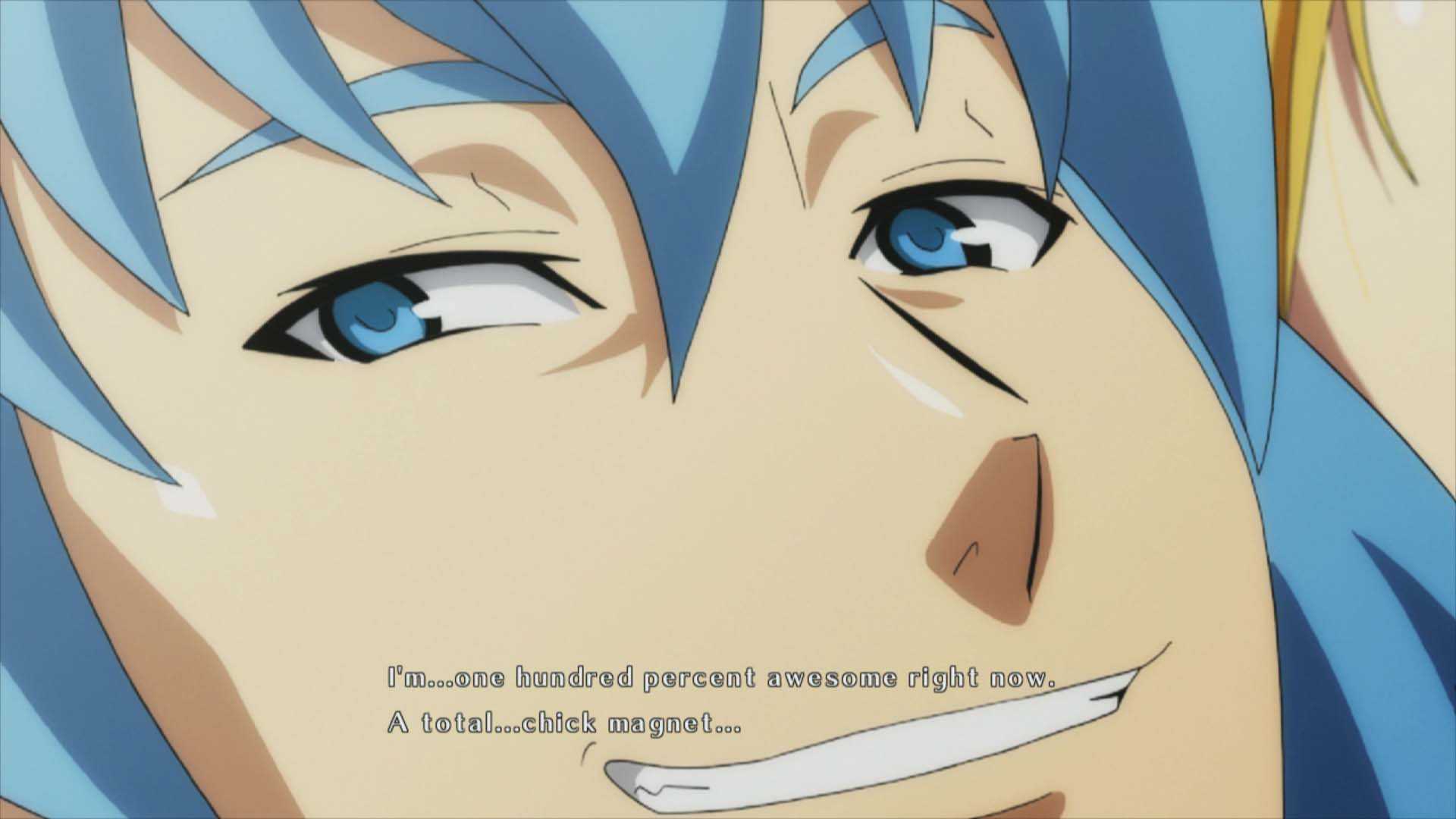 A wedding ceremony is supposed to be one of the monumental milestones in the lives of the two people who are involved, as they commit their love for one another in either a formal or entertaining ceremony. For the knight Zack  (or *Insert Name Here*) this was supposed to be his day as one of the luckiest men in the kingdom. Yes, he has become engaged to the Princess of Kamza, Toki and their wedding ceremony is today!…. even if they haven’t even shared their first kiss yet. However as they share their vows the ceremony becomes besieged by Assassin’s aiming for the life of the princess.

Sacrificing himself for his love, this causes Toki to reveal two of her biggest secrets – that she houses another entity within her by the name of Towa and that she has the ability to manipulate time. Therefore in a last ditch attempt to prevent these events from occurring she sends herself six months into the past to try to rectify the situation. With Zack now trapped in the body of her pet dragon “Drake”, the three of them (With Toki and Towa alternating control of the princess’ body) seek out to put an end to all who stand between them and their happily ever after. 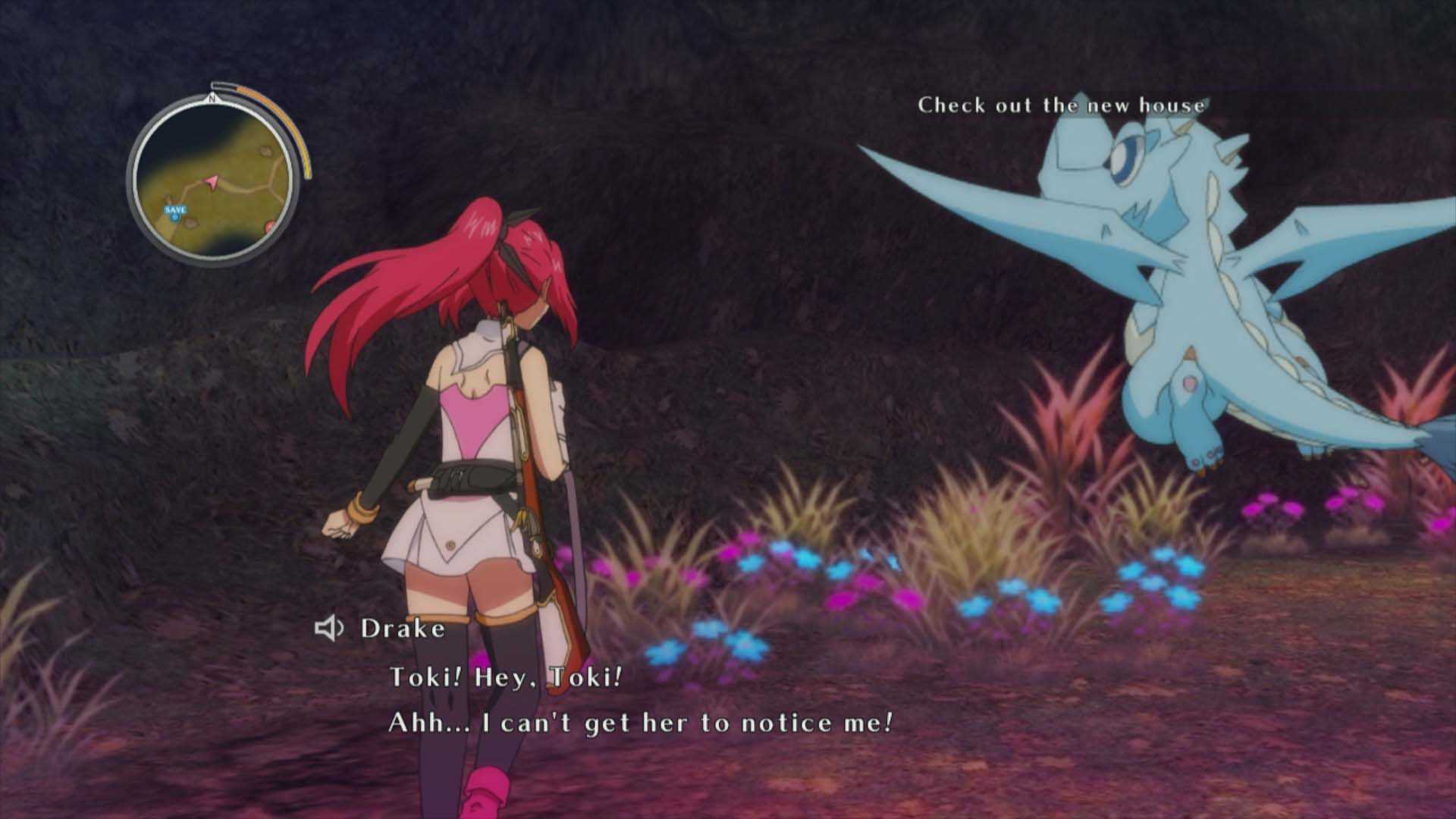 The time jump scenario is nothing new for a game, and as you have most probably already guessed you will be shoved back and forth through time on several occasions to face a new adversary as you solve the overall mystery of just who wants to see your wedding day in shambles. The concept of the wedding and all the plot twists surround Toki was also worked quite well as an overall premise for the events that take place. However while the basics were done quite well and was complemented with rather nice localization work produced by the team at NIS America there were areas that really needed to be improved in what they had to work with to keep this to a standard at least myself would be happy with.

The big issue I had is that while they had a well-handled premise, it was ruined somewhat by one-dimensional characters with some very generic personalities. Towa was probably the only half-interesting personality out of the group as she attempts to put up a tough-girl facade which slowly breaks down – while characters such as Zack comes across as your usual perverse albeit reliable male lead. The other non-playable characters are not much more interesting with respects to their own personalities despite the time the game invests in them. They have their own roles in the storyline which do on occasion shine, but outside of the events surrounding them much of the dialogue was nothing all too special and takes up time that would be better spent on building the plot more.

As someone who loves a good storyline, I can easily spend hours on end playing a game that keeps my immersed in its narratives. Unfortunately due to the reasons above I found myself occasionally skipping simple dialogue and not really having a good rapport with it overall. Therefore Time and Eternity’s storyline just scrapes an average in my books. 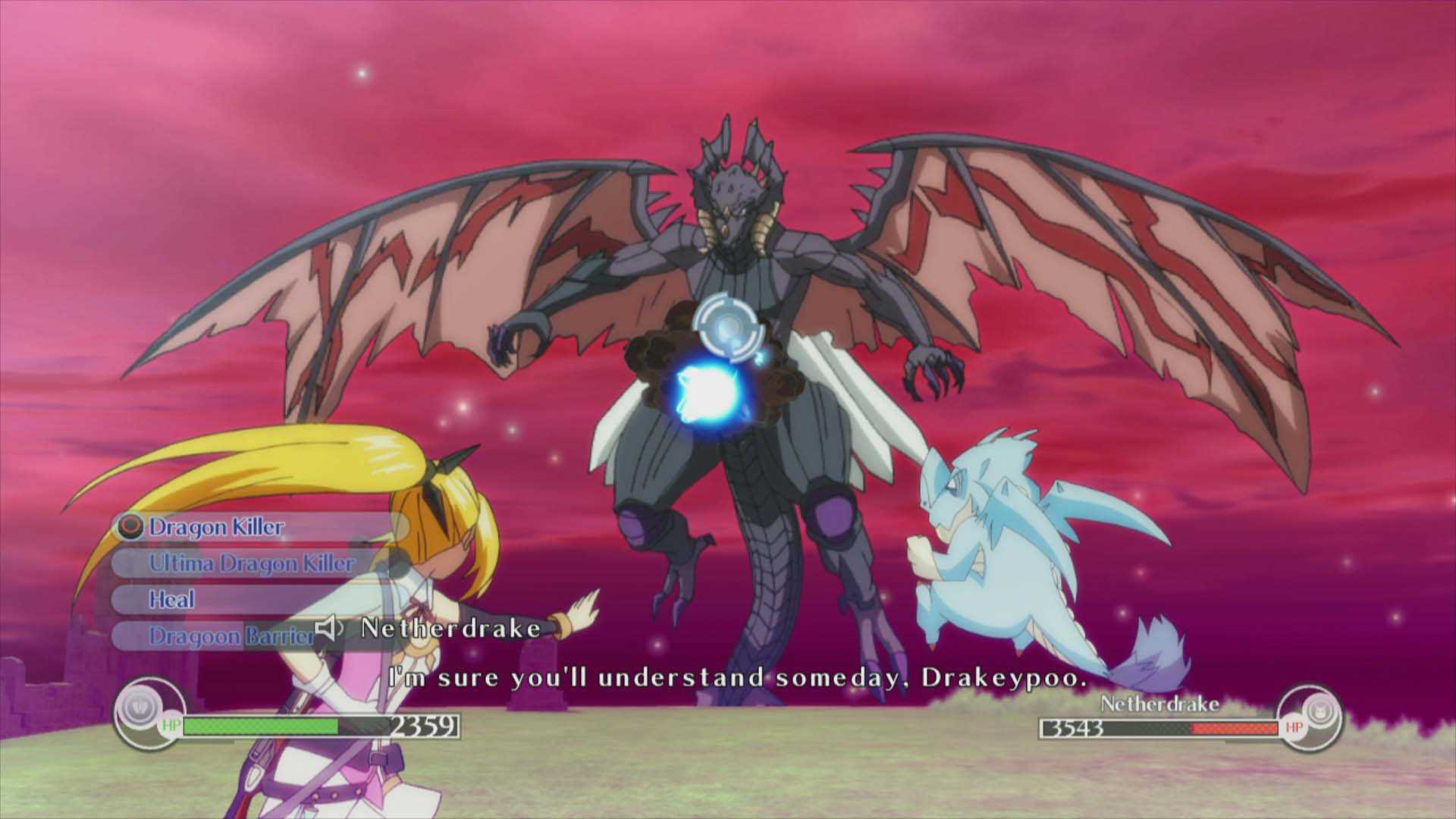 Aside from a few issues the overall design and visual quality of the game was a highlight. They originally set out to develop a game where there was little differentiation between the anime-style cutscenes and in-game animation. With all of the characters in the game being designed and animated using hand drawn animation it worked like a charm and despite a few obvious limitations (Such as there being no quick-to-rotate rotatable camera) it is something that captures your attention from the start. The design is also notable because it was produced in collaboration with VOfan of Bakemonogatai acclaim. Unfortunately in what seems to be a cost and time cutting measure, colour palette changes of enemies are quite frequent which is noticeable both visual and gameplay wise.

While the hand drawn animation is a major talking point for the game and one I was happy to see they had managed to pull off, the other design elements were pretty average. Unfortunately they decided not to go with anime-style environment designs aside from the skies – so at times it does become a mish mash of really nice hand drawn characters on an environment that comes across as tacky. Fortunately at least they throw in a variety of different areas in the Kingdom of Kamza.

But just imagine if everything kept to the anime-style visuals…. they hadalready shown their competency so I wish they hadn’t stopped half way. Even something more along the lines of Ni no Kuni: Wrath of the White Witch with the environments may have pulled across the design from being “Good” to “Great”. 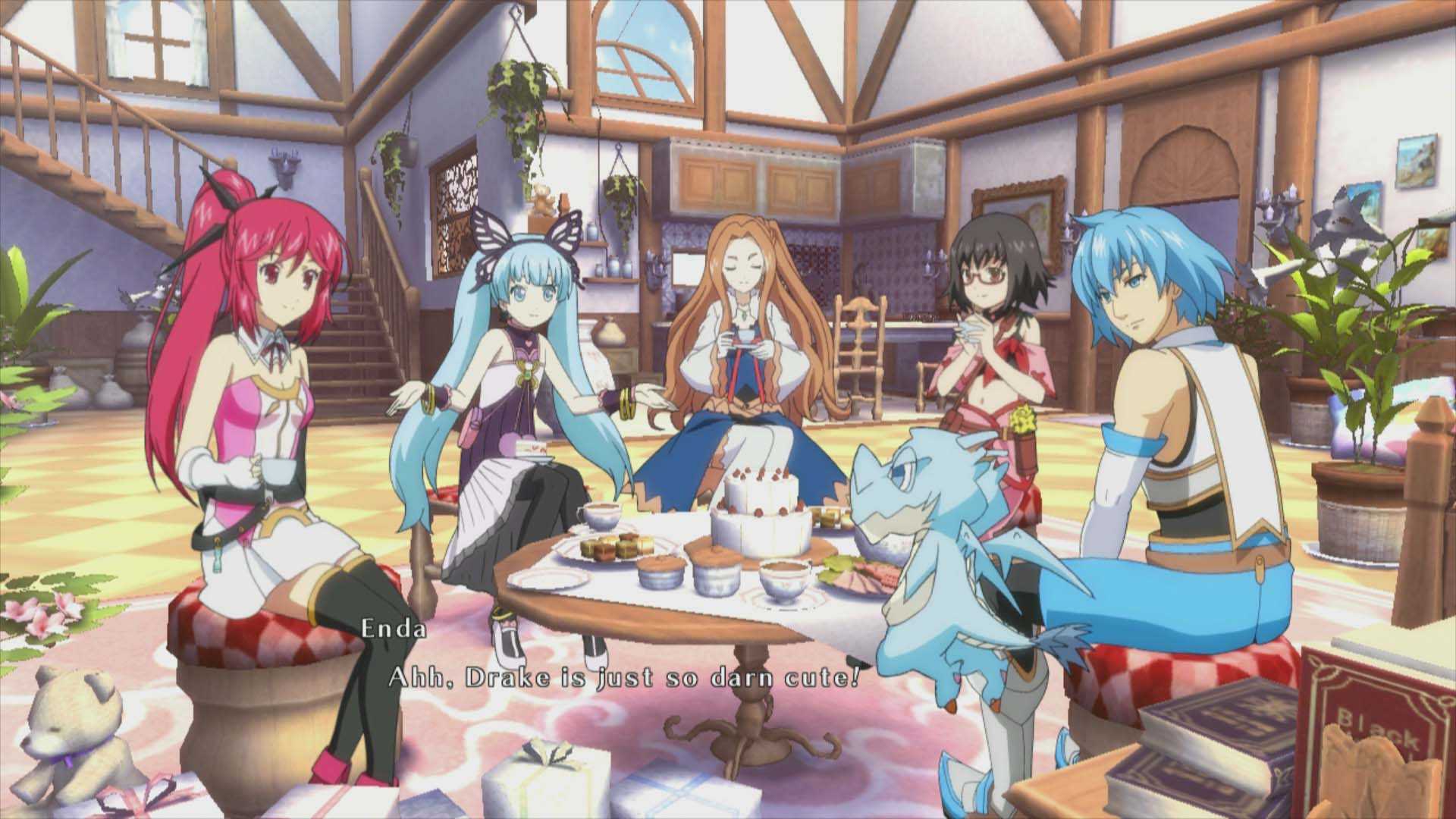 While I though the battle themes for Toki and Towa were both really enjoyable tracks, the rest of the games music soundtrack varies in quality and while it may have some diversity of tracks you will find the same ones looped over and over again.

As with many of the releases by NIS America they have chosen to produce their own English dub while keeping the original Japanese dub available for those who prefer it. There was nothing special about the English dub however it still does a decent performance for the game. I haven’t checked out the Japanese dub for this review but it may be something you would want to look into for this game. 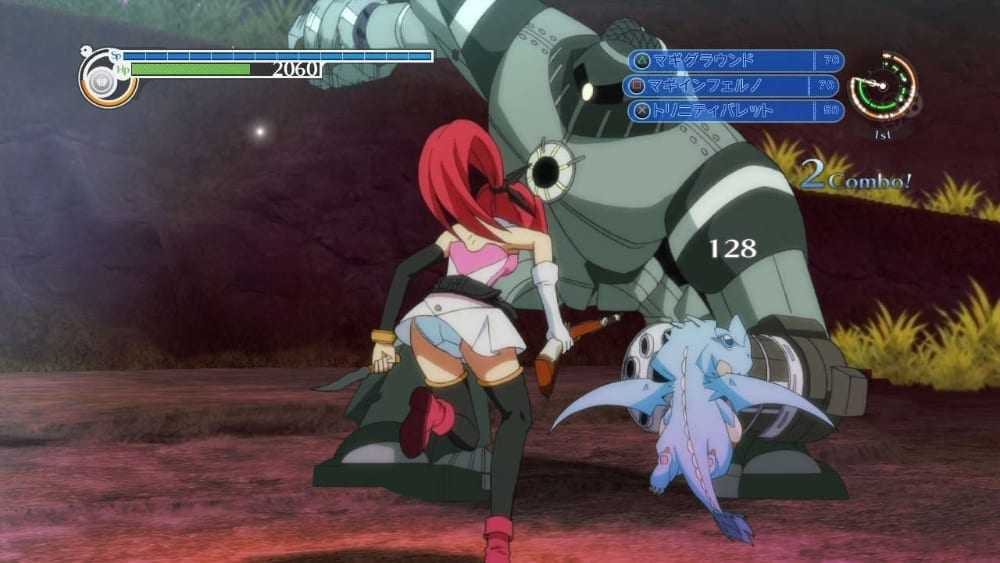 Gameplay in Time and Eternity involves the use of a general quest system and a battle system that has been developed to cater to the visual style that comes across as unique albeit rather shallow. First to the battle system. The game makes use of a real-time 2 v 1 battle system that includes either Toki or Towa as the playable character and Drake (Zack) as an NPC who will occasionally hurtle attacks at your foe in his Dragon form. Attacks take place on both the Front / Back layers with either side being able to move forward to pull off an attack. Fighting directly in-front allows either of the girls to attack with melee combat while attacking from the back row relies on their rifle – however Towa is more adept at melee and Toki is more adept at ranged attacks leaving some degree of strategy.

But how do you choose what girl to fight with? Essentially aside from using an item you have little choice but to level up your character – with each increase in level shifting between the two girls. While this can potentially ruin a good strategy if you level up just before a major boss fight, both girls have ample skills they can learn from receiving Gifts based on a rather extensive skill tree through earning points each battle. These include melee, magic, ranged and a gift allowing you to issue commands to Drake. Both girls have slightly different trees but still offer the adaptability to most situations through its diversity. Another neat feature of the battle system is that keeping in tune with the “Time Manipulation” storyline, both Toki and Towa can also use time magic in battle to reverse the flow of battle a bit to undo the impact of a devastating attack or one of a couple of other perks of using this system. 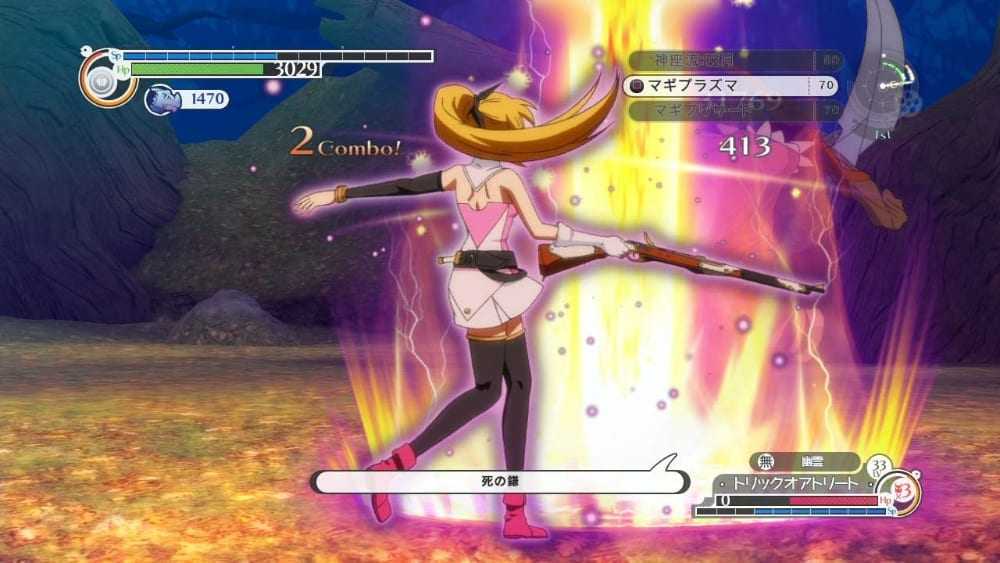 Unfortunately when coupled with the overuse of the same enemy designs with a simple recolour, battles can sometimes end up more tedious than challenging or enjoyable. After one or two rounds with a particular enemy you can usually figure out the patterns they attack in and then battles merely come down to dodging each of their attacks while you slowly dwindle down their health. Fortunately this does not hold as much for some of the more interesting boss battles where the system is finally given the chance to shine in the once-off battles. As battles are taken against a single enemy at a time (Although battles can involve many enemies in succession) memorizing attack patterns are the way on winning battles I found, and once you do that it is just a matter of grinding down its health with attacks and skills.

Time and Eternity makes use of your usual quest system that has you running around the world for items or to speak to other characters in order to obtain the points to use on gifts to upgrade both of the girls.  There is nothing much to be said on this system as it does its job well and they do offer quite a few different premises for the quest even if they mostly result in same general end results (Items, Battles and/or Conversations). 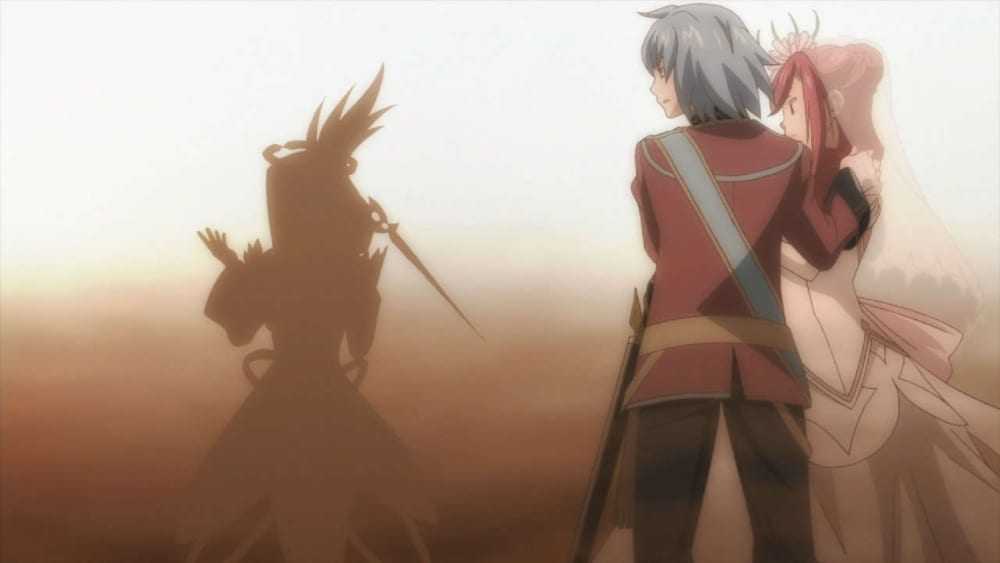 Overall Time and Eternity made for a very average experience that didn’t live up to my expectations in any way. While most releases from NIS America are ones that I can usually pick up, put in my Playstation 3 and play for hours on end with no particular issues, I felt like I had to strain myself with Time and Eternity due to its slow pacing and battle system that offers little in terms of strategy whilst requiring a fair amount of time for each random encounter to complete. That being said its visuals are still really nice and I could still see it appealing to some RPG fans…. just not to myself so much in this occasion.

While the charm point of the game came across well, more needed to be on offer in regards to the storyline and gameplay in order for this to be up there with other releases. That being said, it was good to see that NIS America looked into something a bit different for one of their releases this year and I hope to see them trying out other more unique releases in the coming years. That being said, I am ready and waiting for The Guided Fate Paradox and Disgaea D2: A Brighter Darkness to be released later this year!

Overall Score for Time and Eternity

Overall for Time and Eternity I give the game the following grades:

Therefore, I give the game an overall score of D+.