While this years E3 event has shown that there has been quite a bit of indie game support for the Playstation Vita platform, in terms of full-scale retail releases the big titles are few and far between. Given the gaps of time between them you would expect that these titles stand out in your memory and to their credit quite a few of them have – for example Persona 4 Golden and Gravity Rush.

The latest first-party offering for the Playstation Vita takes the form of Soul Sacrifice – an action RPG that boasts game designs by (the real) Keiji Inafune (+ his new Comcept studio) and development from both Marvelous AQL and SCE Japan studio teams… so it has quite a lot initially going for it. But you can’t judge a game by its cover so how does it take shape when you actually sit down and play it? Read on to find out! 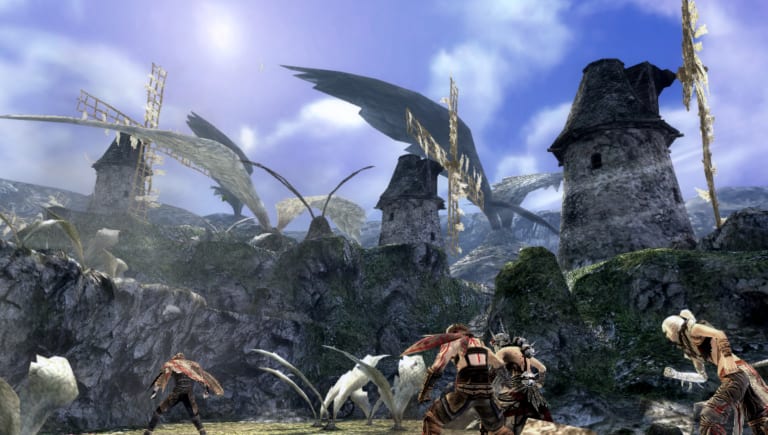 Ever since Nier I have been looking for the next game that would feature a witty talking book, and while Soul Sacrifice’s iteration “Librom” may not reach the standard of Weiss he does make for an interesting companion character. You begin the game in a bleak world, where you are one of the many who have become enslaved by a sorcerer and are waiting in your suspended prison cell awaiting your end. It is uncovered that the person in the cage next to you is in possession of a magic book that reportedly holds the sorcerer’s (Magusar’s) secret – but as the prisoner’s secret is uncovered by the sorcerer himself he is disposed of.

Coming in possession of this book yourself, you are given the opportunity to make your way through its memories and even effectively write yourself in as the main character of it. As you make your way through you begin to learn the ways and trials of a Sorcerer eventually giving you the abilities to face off against Magusar himself. It is a dark and eerie storyline that even as you venture into the past still retains these elements.

An interesting decision was that as you write yourself into the story, you can also say “Screw You!” to the storyline and choose to claim all your built-up powers and face Magusar whenever you want. While you are highly unlikely to defeat him until getting a fair way into the game it is nice to know they won’t lock you in to fully completing it if you have the skills already. 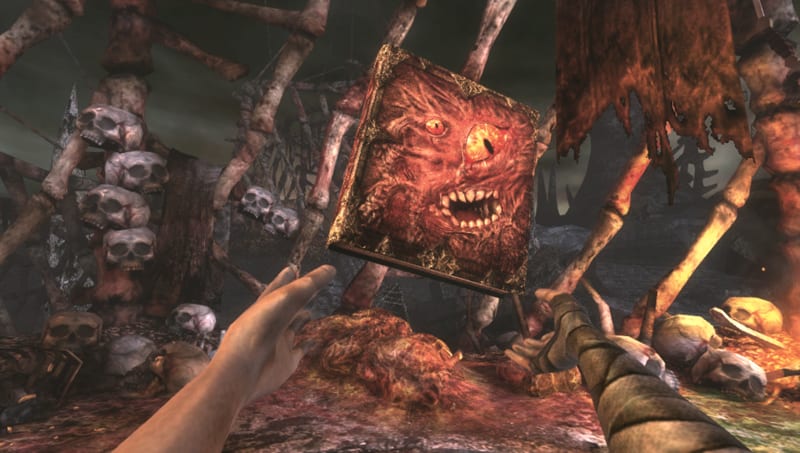 While it may not get close to the visual quality of titles on the Playstation 3 Soul Sacrifice comes with some very nice visuals for a Playstation Vita game that aids in immersing one into the intended setting, however still lacks a few elements design-wise which would have taken it from nice to great. On a high note both the animations and character designs are of a solid quality and aside from the overuse of generic enemy designs they do manage to come up with some creative boss and other comparable designs (The design of Librom is also very interesting and carries across a demonic spell-book vibe). Sure it might not be the most colourful game on the market  – but it is what you should go in expecting – dark and gloomy.

While the designs to carry across the environments quite well, the environments you are left to complete your quests in are uninspired and at times well and truly overused. While I am not expecting a new area every quest considering this is neither an open world game or on a home video game console – I was left expecting more. 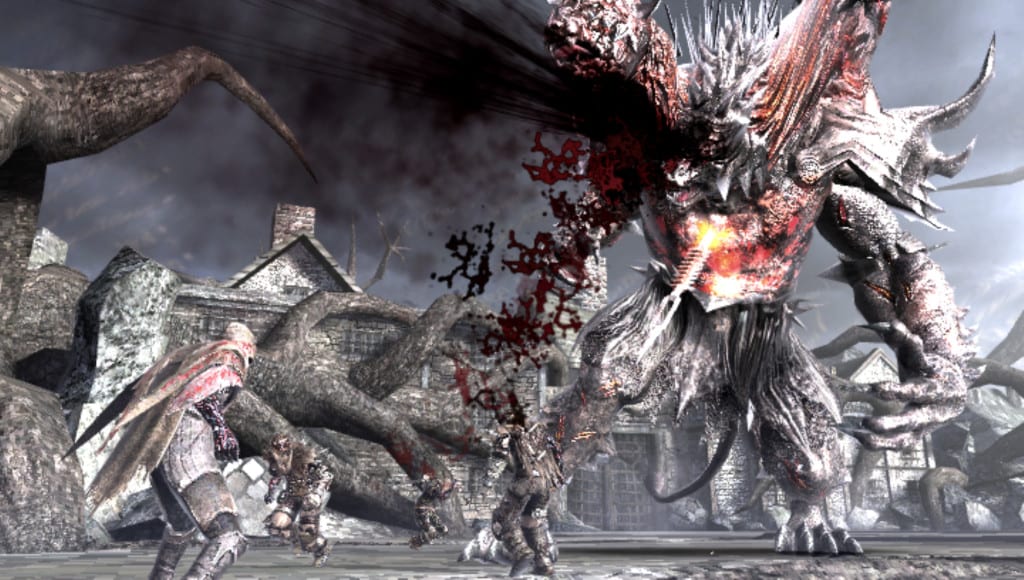 While not overly extensive, Soul Sacrifice comes with a rather strong soundtrack which complemented the intended theme and tone of the game appropriately and is not something that simply fades into the background. In return, the game does come with an English dub which and they don’t skimp on the quality or quantity of the spoken dialogue. 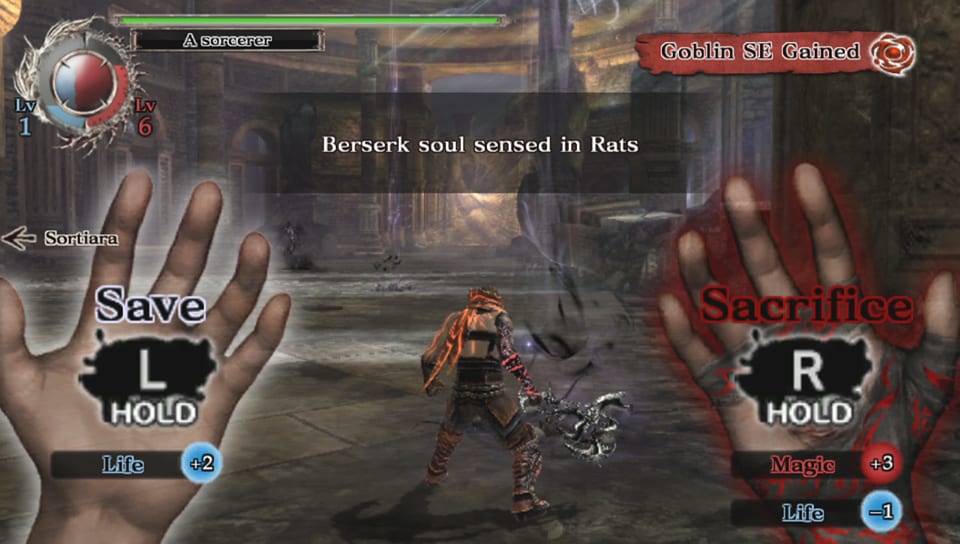 Unfortunately I don’t feel that Soul Sacrifice lived up to its full potential working with a mission-based system, as even some of the more interesting plot events simply come down to defeating X number of Y or occasionally something similar that only occasionally feels innovative. That being said, in keeping in line with the storyline you are given access to the talking book Librom whose pages are initially locked out to you and progressively unlocked as you complete the tasks on each mission page. The goal is to progressively build and unlock new powers in order to give yourself a fighting chance when you go up against Magusar and earn your freedom.

As you are a sorcerer, you don’t really have any weapons at your disposal. Instead, you can earn yourself a plentiful supply of “Offerings” or “Spells” during your quests which can then be equipped into one of six slots and used to attack your enemies. The number of offerings you have to unlock are plentiful and there are many different types to obtain. However each of these are limited use therefore especially in the later stages of the game there is a sufficient balancing act between low use / powerful spells and high use / weak spells. You can decide to upgrade or do a number of different processes with the spells to make them more powerful and there is more depth to the system than they first let on. 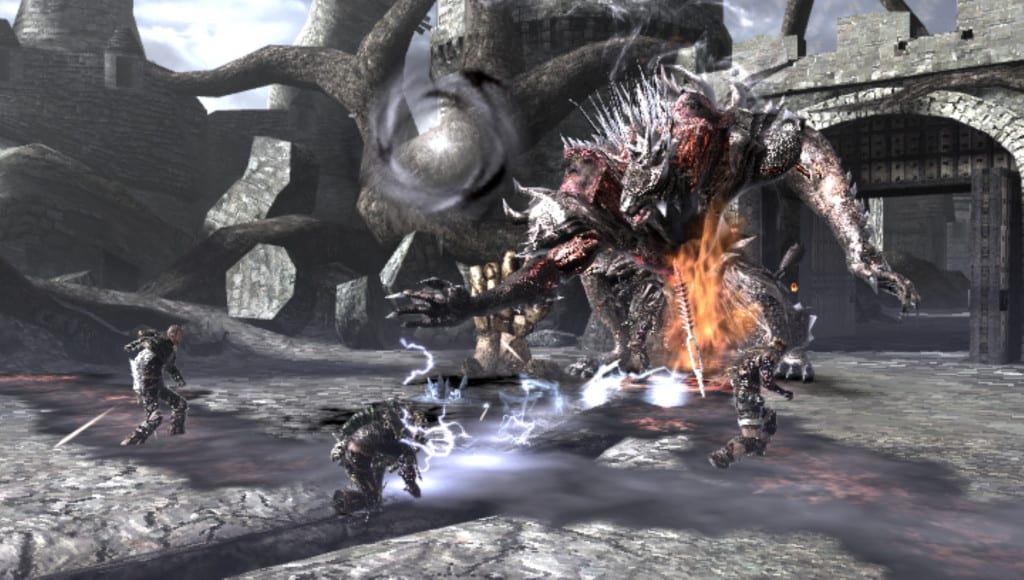 Of course as this is Soul Sacrifice the game does offer you several occasions which you are given the opportunity to sacrifice something in return for powerful spells. This is through the “Black Rite” system where as you progress through the game you can unlock skills which can be cast by offering up parts of yourself. For example the initial one “Infernus” has your sorcerer offer their skin to deal severe fire damage to all enemies on screen in return for halving your defense.  Another lesser example is Gleipnir where you offer up your right arm and all offerings attached to it in return for a powerful cursed chain to bind archfiends with. While this damage persists across missions you can undo the damage through the regularly acquired Lacrima. While your sacrifices never become a game breaking investment, it can turn the tide in a long, tiring battle.

Also in keeping the “Sacrifice” aspect in the game, whenever you defeat an enemy you are not automatically given any experience points. Instead, during battle (As you only get a limited time after battle to do so) you must walk up to them and choose whether to sacrifice or save them. Sacrificing can improve your magic but occasionally reduce your life points while Saving boosts your life points but occasionally lowers the magic ones. Its a rudimentary system but it ties in nicely with the game and it is good that even for an action RPG they are letting you give some direction to your characters levelling – even if the best method I found is to balance them out. 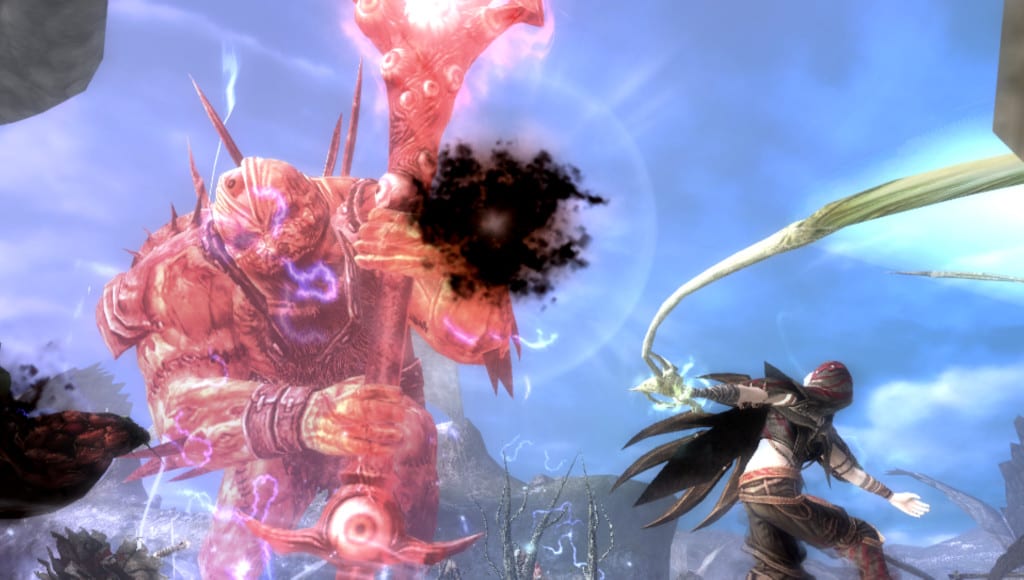 While there are a few other tidbits to uncover as you play through the game, you will be glad to know that taking into consideration the actual battle system the game actually puts up a challenge and can be entertaining in bursts despite the grindy nature and at times uninspiring missions. The game is considerably difficult and enemies – both standard and boss-tier can put up a good fight and death is plausible at times meaning that the use of black rite spells can prove to be more of a necessity than an optional game-play mechanic at times. The game also gives you access to AI party members who fight alongside you and pick you up when you are down – but fortunately the game offers online multiplayer which is where the party-system truly shines and can be quite fun.

When I look at the game as a whole, there are areas across the board that I could personally pick at – from the lack of variety in location designs to the game really needing more thought put into their individual missions. But fortunately it still delivers a solid RPG experience broken down into bite-sized but still challenging missions for those who play the game on the go.

Final Score
Storyline/Character Development: C+
Design: B
Music/Voice Acting: B
Gameplay: B
Replayability: B
Personal Opinion: B
Overall Score: B