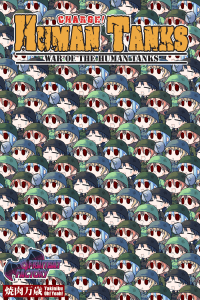 While already available through a couple of channels including the companies official website, the team at Fruitbat Factory have been able to secure both titles to be available via the online store of MangaGamer – a publisher of visual novels whom have also been in the news on The Otaku’s Study recently (Acquisition announcements: Touma Kojirou’s Detective File: Murder at the Opera House and Imouto Paradise).

War of the Human Tanks is the companies very first game that was released last year. The story takes place in a land vaguely reminiscent of modern-day Japan, where twenty years after the first Human Tank was developed there is a war raging between the Empire of Japon and the Kingdom of Japon – almost exclusively fought between these Human Tanks on either side. The Empire of Japon once ruled the entire land of Japon. Now diminished and cornered, the Empire prepares to make its last stand as the tanks of the Kingdom of Japon draw close to its capital. Shoutaro Daihon’ei, Lieutenant of the Imperial Army, moves out to the battlefield, followed closely by the loyal Human Tanks in his company.

On the other hand, 99 Spirits has just been released by the company, and is quite different from War of the Human Tanks. It follows a young headstrong girl by the name of Hanabusa who lives in the Heian capital within medieval Japan. But when her mother is slain by evil spirits, her life turns into one of vengeance as she sets out to hunt and destroy the spirits. During Hanabusa’s travels, she meets a white fox who turns out to be a servant of the mountain god. Hanabusa receives a special sword passed down from her mother, which gives her the ability to see the true forms of spirits to help slay them. Shortly after, a spirit claiming to be Hanabusa’s long-lost father, Hidetada, breaks her sword and leaves Hanabusa powerless and confused. Now to mend her broken sword and learn the truth about her father, Hanabusa embarks on a journey to annihilate every last one of the evil spirits.

MangaGamer have both Standard and Deluxe editions of both games available for purchase, which you can check out via their all-ages section of the site HERE.