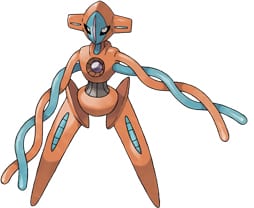 The team at Nintendo have confirmed that from today until the 31st May 2013, Pokemon trainers will be able to get their hands on the mythical Pokemon Deoxys via a special distribution event through the Nintendo Wi-Fi Connection service.

Deoxys is a Pokemon that can change its forme, and has for several generations provided fans with a wealth of psychic-type powers and mysterious interstellar origins. Little is known of its past, but Pokemon professors have determined that Deoxys was originally a virus of alien origin: as it plummeted through the atmosphere on a wayward meteorite, the virus passed through a laser beam and mutated to become Deoxys.

Making its first-ever appearance in Pokemon Black 2 and Pokemon White 2, Deoxys carries some moves that are special to this distribution. Trainers can torment their opponents with a balanced set of attacks and healing moves like Psycho Boost and Recover, then knock them off balance with Nasty Plot and Dark Pulse, two moves that Deoxys can’t normally learn on its own. If that balanced attack isn’t enough, raw power should be: for the first time, Deoxys arrives at Level 100.

Arriving in a Dusk Ball and holding a Life Orb to boost attack power at the expense of HP, Deoxys boasts the Pressure Ability, which can exhaust opponents by draining extra PP. Deoxys can also change Formes to suit any battle, altering its genome between the visually distinct Normal Forme, Attack Forme, Defense Forme, and Speed Forme if its Trainer brings it to a certain place in Nacrene City.

Now for all the boring stuff, but if you already know how to claim your complementary Pokemon feel free to get right to it!

To participate in the Deoxys character distribution event via the Nintendo Wi-Fi Connection service, players will need: