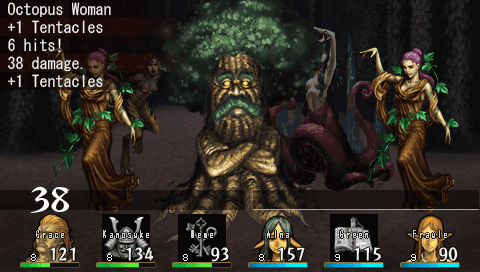 Last night, PAL region video game publisher Ghostlight announced their plans to bring Playstation Portable first-person dungeon-crawler Elminage Original by Starfish-SD to their covered regions. While some may know this as the game that when released in North America required a translation patch to bring its localization up to scratch post-launch, their release will include this patch from the start.

Set out on a grand adventure in the land of Halodra Ille! The fate of this world hangs in the balance as the magical barrier protecting it has been severely weakened by the powers of darkness.

In ages past the gods granted power to six rings to create the barrier. The rings were placed in a tower known as Dragon’s Fang, safe from the enemies of peace. But nothing lasts forever, and now dark priestesses plan to destroy the barrier so they can summon their Demon King and plunge the realm into darkness. The priestesses have already destroyed one of the rings, weakening the barrier greatly, but in doing so the five remaining rings were scattered to the ends of the realm.

With the barrier weakened, monsters of ever greater power and ferocity have begun to appear throughout the land. You must join the search for the five remaining rings, taking your place among the other adventurers of Halodra Ille, and restore balance to the world!

While I will admit there are more recent first-person dungeon crawlers on the market, it is good to see another title that was never released in PAL regions finally getting its chance to shine.