In the year 2032, an alien race decended from the clear blue sky and the invasion began. Fast forward to the year 2051 and there are only 12 humans left on the planet earth – all whom have come together to put their last hope in the hands of BRS (Black Rock Shooter). Recently awakened, BRS ascends into a crumbling world to destroy the aliens and deliver peace to the remnants of mankind. 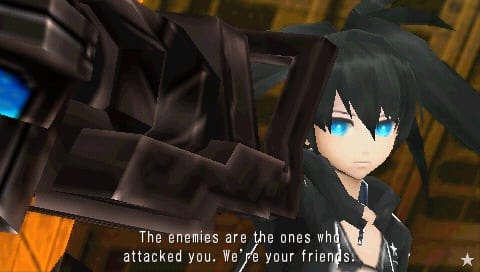 I really like the concept behind the storyline of the Black Rock Shooter franchise. When you think of franchises like this you may think a video game which later is expanded to an anime and manga series either rehashing the same storyline or otherwise simply building upon the storyline with sometimes trivial and meaningless events. With Black Rock Shooter that hasn’t really been the case… where the anime series (Published by Siren Visual in Australia last year), manga series and video game series to name a few all feature considerably different storylines. While small aspects may carry across, the only thing that they all really have in common is BRS or Black Rock Shooter, a mysterious young-looking girl with black hair who possesses a high power gun.

This storyline takes place in the year 2051, where after nineteen years of being attacked by aliens who came to Earth the human population is very close to extinction. The twelve remaining humans band together and manage to awaken the legendary BRS who is pretty much their last hope of survival due to her unique superhuman capabilities as they are constantly under threat from the alien invaders and their numbers are still dwindling fast. Most of the games storyline is delivered via cutscenes, and while the pretext may not be the most creative or unique for a game,  its delivery was adequate from start to finish although tended to drag along at times.

Easily the highlight of the title is BRS herself, and avoiding spoilers she does receive I think ample character development throughout the entire game. There are a couple of other characters which also receive adequate development but many more seem to fall below the mark in terms of interest, especially at the start where many of the characters are soldiers and only a couple of them had any notable characteristics to their appearance or mannerisms – and this doesn’t always leave a strong first impression.

Overall, BRS: The Game’s storyline is most probably its weakest element, and while it does the job and delivers a pretty somber tale… there is nothing special to set it apart from all the other stories on the market, even in comparison to the Black Rock Shooter anime series. 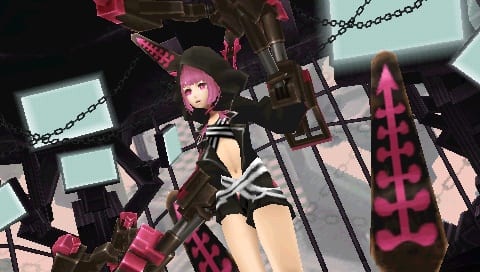 You have to take into account two factors when thinking about the series overall design, especially in terms of visual quality. The first being that this is a title for the Playstation Portable and in comparison to the Playstation Vita there would be limits, and secondly that this is not a new title having been published in Japan back in 2011. Granted this is not a great time gap, but nevertheless needs to be taken into consideration. That being said the design and visual quality were both above average in this release.

The character designs were all creatively thought out and carried across the styling that Huke has become known for both in Black Rock Shooter and Steins;Gate. The character models themselves carried across this concept well in terms of both quality and design and their attention to detail in the little designs such as the weaponary and character animation were also up to scratch. This being said, for more generic NPC’s and enemies while not a deal-breaker did not have that level of design and often came across as generic and/or overused.

While detailing could have been a little better, despite the post-apocalyptic setting for the game, they came up with some pretty creative environment designs. 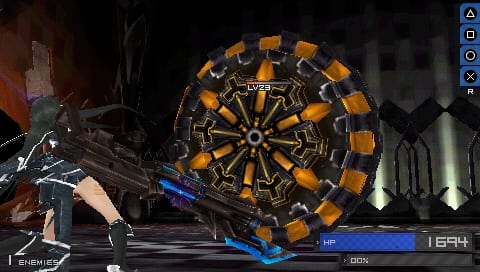 While repetitive at times, Black Rock Shooter: The Game boasts an enjoyable soundtrack overall that complements the combat and setting very nicely.

Nippon Ichi Software America seems to have decided that it was not worth the time and/or funds to produce their own English dub for the game. Instead, they have retained the original Japanese dub cast with their own localization of the text. The Japanese dub was overall of a solid standard. On the other hand, while I don’t have text to compare to for accuracy what came across in the companies localization was coherent without noticeable errors in the text. 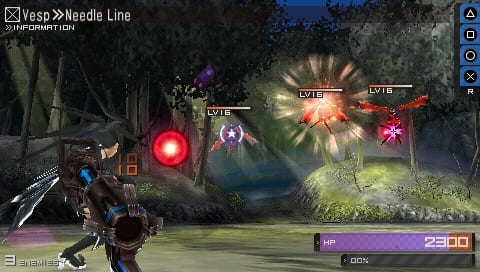 Upon beginning the game you are given a brief tutorial of the games battle system, where you pretty much have your level maxed out and given access to some of the niftier skills you will be unlocking during the game. After then, you are thrust into BRS’s newly awakened state and made to build her levels from scratch. Given its title, you may be expecting to see a shooting battle system, and the 1 vs enemy battle system makes good use of this concept. The battle system blends third-person shooting with RPG and on-rail shooter mechanics, where BRS remains standing still while being faced with an onslaught of oncoming enemies. At its core, the battle system utilizes a Dodge and Attack system, where you must target and shoot towards an enemy until their health points dwindle down to nothing, all the while timing yourself so you are not hit by the enemies or your heat gauge overloads.

While they do throw in a couple of skills which you can unlock through the games rudimentary leveling system at the beginning this system can become dull, especially during occasions where it isn’t necessarily practical to just run away from enemies as they approach you on-screen. Fortunately later on in the game things really do pick up and offer a greater challenge as you balance your skills, attack/dodge patterns, heat gauge and more to ensure success in BRS’ quest against the impending alien threat. The gameplay did do its job, but given its restriction on movement through the on-rails system and lack of challenge in the first parts of the game… it could have been better I think and would be interested to see what Imageepoch could come up with if they were to produce another game. 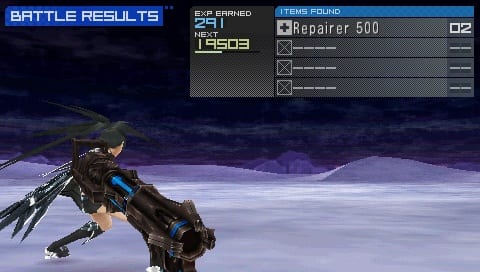 Black Rock Shooter: The Game is split up into missions, and even in the same area you will find that rather than have it as one big mission, it is split up into several smaller missions from the get-go – often with one main objective and a couple of plot elements (Even if it is a simple Kill X number of Y mission). This isn’t the first time a game has decided to go down that route and it does help break up replays into small sections. However, I feel they didn’t need to be as restrictive on where one mission ends and another one begins. The game does also throw in quite a nice set of unlockables through regular play and a few other tasks which include costumes for BRS to wear for those of you who are after some post-game replayability.

Unfortunately despite the long wait for the game, there ended up being a decision that due to licensing issues only a certain number of regions were able to get this game on their Playstation Network store. But overall, while Black Rock Shooter: The Game is nothing to enthuse about and could use improvements in the storyline and gameplay departments – it is a pretty good title to spend a few hours of playing and offers adequate game-time and replay potential.