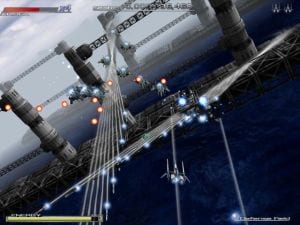 Nyu Media have today not only launched another Steam Greenlight campaign for their next release The Tale of ALLTYNEX but also a Kickstarter campaign. Their release is set to be an English localization of the shoot’em’up title originally developed by the Japanese indie studio SITER SKAIN. Comprised of KAMUI, RefleX and ALLTYNEX Second, this trilogy of games pits brain-transplanted fighter craft, reflective shield technology, and blade-based melee attacks against militarized global government, genocidal A.I., and ancient alien weapons of mass destruction.

While it is pretty obvious what their reasons for the Steam Greenlight campaign is, their Kickstarter campaign aims to support the final stages of the localization work and to go towards promoting the game upon release. Reward tiers for contributors include the games, soundtracks, plushies, dakimakura, and a trip to the Winter Comiket event in Tokyo this December to hang with the Nyu Media team and meet some of the best of indie developers in person. Stretch goals are also in place that will deliver limited runs of collectible physical editions of the games.

Playable demos are set to be made available over the course of the Kickstarter.

Update: As of this post, Nyu Media have almost reached their goal of $4,999 ($4,815) with 29 Days to go and 116 backers. Some of the stretch goals include a localization of the games official guide book, as well as a limited physical edition of the game which due to their localization budget is currently not possible.