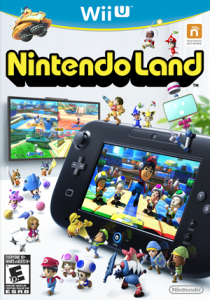 Nintendo Land is one of the Wii U’s launch titles, and will come included with the Premium Bundles of the consoles. The game is set to include 12 themed ‘attractions’ or game compilations based on popular Nintendo franchises.

This leaves only three yet to be detailed – which Nintendo unveiled information for today. These games are as follows:

Yoshi’s Fruit Cart
Using the GamePad touch screen and stylus, the player draws a path for the Yoshi Cart to follow through each course. However, only the view of the course displayed on the TV screen shows fruit that must be collected and obstacles that must be avoided along the way to the goal. This fun attraction is a great example of the kind of integrated second-screen gameplay made possible by Wii U and the GamePad controller.

Captain Falcon’s Twister Race
In this single-player Attraction based on the F-Zero racing franchise, players get a top-down view of the track on the GamePad, which must be held vertically and turned to steer their vehicle through a winding, twisting track, trying to hit checkpoints before time runs out. Driving across dash plates can provide a quick burst of speed, while obstacles like speed spikes, whirlwinds, other vehicles and even bombs can make for a dangerous run.

Octopus Dance
In this single-player attraction, players use the GamePad to mirror dance moves performed by a deep-sea dance instructor. The goal is to always be watching one’s own movements from the back to more easily mirror dance moves, but the dynamic interaction between the GamePad and the TV adds a unique twist. Players must be ready to switch between the views offered on the TV screen and the GamePad screen, as sometimes one view is more useful than the other.