The recently opened GungHo Online Entertainment America, a multiplatform publisher for the international gaming community have announced that their first ever title ‘Dokuro‘, for the Playstation Vita is now available in North America. The game is available as a digital download via the Playstation Network for $19.99.

The game is a mixture of puzzle and side scrolling platformer gameplay elements that makes use of the Vita’s touchscreen and rear touch pad as well as other controls to both manipulate the games environment to solve puzzles and metamorphose the games protagonist between two different forms. Each of these forms featuring unique and sometimes advantageous skills. 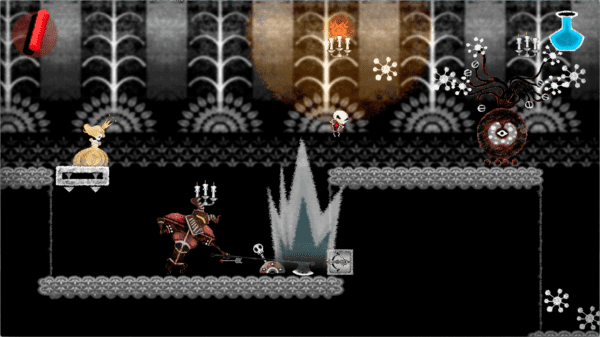 In Dokuro, players take control of the game’s namesake protagonist, a minion in the Dark Lord’s army whose small stature betrays his true strengths.  After witnessing the kidnapping of a helpless princess at the hands of his master, Dokuro takes it upon himself to rescue her by battling his way out of the dangerous fortress. While Dokuro’s agility allows him to traverse the castle’s many platforms and pitfalls, at times he must utilize a magic blue potion in order to transform into a dashing hero, who can both carry the Princess to safety and slay the Dark Lord’s followers.

The key to Dokuro’s victory lies in his ability to manipulate his surroundings to protect the Princess, since her fear will lead her to continuously move forward in her escape attempt. In order for Dokuro to succeed, players must use both his skeletal and hero forms to approach and tackle the various puzzles. He will have to brave lethal hazards such as spiked pits, doom-bringing saws, scorching flames, and all manner of deadly, demonic beasts. Luckily he has the power of the almighty chalks to help him. By utilizing the front touch screen Dokuro can alter his surroundings by drawing ropes, lighting fires, and filling ponds. He will need to keep his wits about him to escape the Dark Lord’s treacherous pitfalls and defeat deadly boss monsters as he and the Princess make their way through approximately 150 levels of escalating complexity and difficulty.

The release of Dokuro is exciting as it marks the official debut of GungHo Online Entertainment America as a new publisher. We couldn’t be more pleased to have this fun game be our first release as it reflects a high quality and entertaining experience for our players.

Dokuro is set to be released in Europe as well over the coming months.