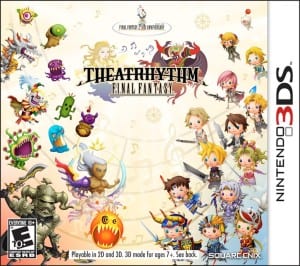 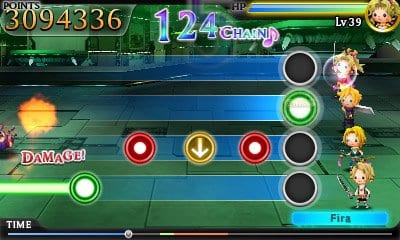 With humble beginnings on the Nintendo Entertainment System in 1987, Square and later Square Enix has seen some considerable success in the series over these last 25 years. But it raises the question of how they would celebrate this anniversary in a game. Taking into account that you have fourteen major numbered installments in the series, some of which have sequels plus several spin-off games… all of which despite sharing the same series title and currency have very little to do with one another. The one thing the series has shown us which can be translated into a game is its music….. and so we have Theatrhythm Final Fantasy on our store shelves. Does this game merit a purchase? Does the merging of the RPG and Rhythm genres work? Find out in my review of the game below!

Slightly based on the storyline of Dissidia: Final Fantasy, a similar fighting spinoff game released in 2008/2009 for the series 20th anniversary, the game follows the events of the gods Cosmos and Chaos. In between them is the Rhythm, which bore the music crystal. Through the forces of Chaos, the harmony of the crystal was disrupted and the light of it dimmed. To restore the radiance of the crystal, the Final Fantasy characters must work together to amass Rhythmia through a melodic journey.

While the storyline is present at the beginning of the game, it only serves to give some purpose to the game and one particular game mode. The storyline is otherwise not referred to much at all in the game, giving you freedom to choose any song, game or mode to work with. 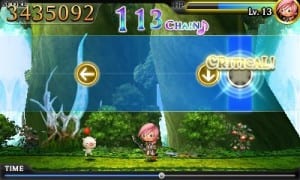 For each numbered game in the Final Fantasy series, two characters were chosen to appear as playable characters – one as a main character and one which is unlockable. The decision to keep the character designs chibified was a clever idea that worked well with the 3D capabilities of the Nintendo 3DS and looked pretty cute at the same time. The same can be said about enemy designs for which pulled some of the most well known monsters and summoned beings from the series long history to include. Environment designs for both Field (FMS) and Battle (BMS) stages were simplistic and at times did get repetitive however they are often vibrant and suited the series well.

For each game they include a Event Music Stage (EMS) which features memorable animations or video footage from each of the games. This served as a nice memento and nostalgia of games that have since been released, however be warned that they occasionally dish out spoilers. Footage does come from the Japanese releases however, so for the initial six games unless you can translate the language you are pretty safe with them.

Personally I am not troubled with 3D effects and enjoy any game on the Nintendo 3DS with or without them. Personally I though they were implemented quite well in this game and at least in the stance I was sitting in to play the game there was minimal ghosting and was well implemented in my opinion. 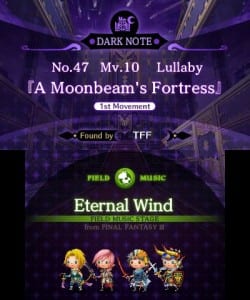 Considering this is a rhythm game, the one thing that tops the priority list is the diversity of and choice of music. For each game between Final Fantasy I and Final Fantasy XIII, you are initially granted access to five songs from each game: the opening and ending theme song as compulsory inclusions and single songs for each Event, Battle and Field music stages. While only the latter three are available outside of series mode, you are given an initially nice selection of songs that should last you a while with a couple more to be unlocked through collecting Rhythmia.

However, after a while I found the song list bit too repetitive to my liking and would have preferred to see a couple more songs for each game included. If this is the case with you, the game offers a number of DLC songs to download for inclusion in your game at $1.50 AUD (or respective price in your region) each. While I believe this was due to a space-saving issue, the series has had enough good songs to offer more for free while still leaving the door open for DLC content in my opinion. The upcoming DLC release list offers some great selections – including the main preview theme for Final Fantasy Versus XIII “Somnus” and both battle and field themes from other numbered Final Fantasy games.

The game does include a number of good songs, and while I often found the field themes to be tedious and would have been better off replaced with other songs, the Battle fields and Event field song choices were well selected – containing obvious inclusions such as Suteki Da Ne (Isn’t it Wonderful?) from Final Fantasy X and One Winged Angel from Final Fantasy VII, to some surprising choices such as “Fight with Seymour” from Final Fantasy X. With the exception of a couple of songs, these are all original tracks. 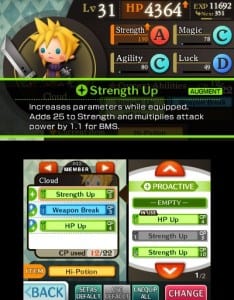 Theatrhythm Final Fantasy is first and foremost a rhythm game. Therefore given the limited nature of the genre on the console most of the gameplay involves moving the stylus across the touch pad in time to the music of choice. The gameplay is split into three separate modes, each of which offer a different style of gameplay and songs. The Field Music Stage generally consists of music you would expect to see wandering around an overworld map and involves your character moving left across the screen while you move the stylus up and down, and correlate your button presses to suit what appears towards your character. Battle Music Stages which involves using stylus presses to coordinate attacks against Final Fantasy enemies to Battle Themes and perhaps of most nostalgia to long-time players of the series, Event Music Stages which feature animation from the previous game as you follow stylus driggers which move across and around the screen. Each of these modes offer three levels of difficulty – Basic, Expert and Ultimate and can be played as either a series or individually. Your performance and difficulty will earn you Rhythmia and experience points, with every 500 Rhythmia earning you new bonus items for the in-game museum, crystal shards for new playable characters or other goodies.

Each of these modes offer something unique and provide entertainment in their own means. But alone… you would have very little incentive to continue on for a longer period of time. Therefore the game throws in some RPG elements to these stages. When you begin the game, you are asked to co-ordinate a team of four characters taken out from Final Fantasy games I – XIII (In my case, it was Tidus, Lightning, Cloud and Shantotto). This is not just for aesthetic inclusion in Field and Battle stages but also incorporates your normal set of RPG game elements to the Rhythm genre – HP Bars which when depleted results in game overs and special skills which can be used when navigating fields or battling enemies to speed up or attack harder resulting in better items (or even use a skill to heal, deal great amounts of damage, weaken foes or factor in for a weakness in your party). You can also obtain and use single-use items which generally have the same effect. This mode is not limiting however and a level 10 character can take on stages a level 100 can, but it allows you to obtain new items easier and quicker. 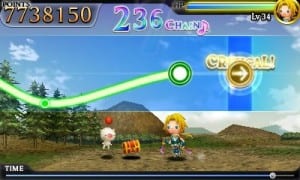 Outside of the core gameplay elements, the game offers a few other things to do and collect. The game offers a third mode known as Chaos Shrine where you can acquire randomly generated Dark Notes and complete two-song challenges by yourself or with friends. While the difficulty does vary between songs, it is an enjoyable mode if you are in for a bit of added challenge. The game also throws in a ProfiCard system which makes use of Streetpass technology to share your stats with other people, an extensive Museum mode which you can earn (and upgrade) character profile cards (CollectaCards), view unlocked music and videos and view your ingame records.

For a completionist this game has a wealth of content to make your way through – with plenty of Dark Notes to master and collectible cards to collect providing hours of entertainment with sufficient difficulty. For the casual gamer there is still much to like about this title but a limited list of initial songs may not give the game as much replay value as you might like (Because lets be honest…. the game has had numerous instrumental and lyrical masterpieces over the years). Overall, an enjoyable rhythm gaming experience with a Final Fantasy twist and a great tribute to 25 years of Final Fantasy!

Final Score
Storyline/Character Development: C
Design: A-
Music/Voice Acting: B
Gameplay: A-
Replayability: B
Personal Opinion: B+
Overall Score: B+