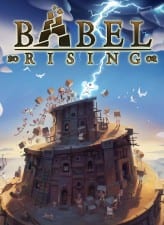 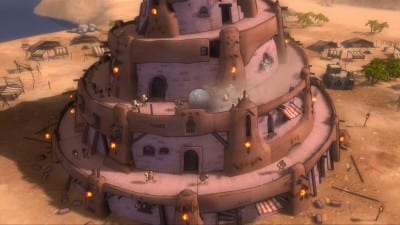 Many games in the past have used the Tower of Babel in literature and gaming and based off the bible was a tower built by a united humanity to reach the heavens (If you are interested, read the Wikipedia entry for it HERE). This time the tower is not infested with monsters or anything along the lines – instead you play as “God” and your objective is to prevent the humans from constructing this tower with an arsenal of abilities from lightning bolts to fire. Unfortunately there is nothing much else to this storyline other than the shift in eras leaving me rather indifferent in this regard.

The gameplay is very similar to previous tower defense games on the market, only instead of occasionally fortifying and building towers, it is your job to prevent the destruction of them against the evil human beings building it through any means possible. The game is split up into many stages each of which are split up into numerous waves – each wave consisting of swarms of humans who are prepared to run up the tower and continue building despite what happened to the numerous others in history who attempted the same feat. The one limiting factor of this game is that despite the number of elements under your control – you are only limited to two, personally I would have been glad to have a greater difficulty to be able to make use of more as it is difficult to determine what you need to use prior to starting the level. The system itself however is quite fun however better in small bursts rather than a long playthrough as gameplay does get repetitive pretty fast.

This release had support for the Playstation Move controller, and if you have access to one I would recommend it as it goes along much more nicely with the gameplay than some okay but somewhat awkward at times controls with the normal controller which takes a while to get accustomed to.

The game looks appropriate for the gameplay presented and they do occasionally provide some really nice locations for the tower to be built and special effects for skills. However, besides this the visuals are nothing overly fancy, average overall for what I would expect of a game of this price. The game does however run smoothly enough. In terms of sound and music, the music and sound effects provide enough but nothing special.

Find yourself needing to get the attention of others around you? Are you sick of being a blade user who has no sparks flying from their hands? Just want another emote to fuel your GPOSE needs?
Read more
Video Games

It might be lacking in historical context, but developers Raven Software and Treyarch have shared their first sneak peek at the zombie mode being included in their upcoming first-person shooter 'Call of Duty: Black Ops Cold War'.
Read more
Video Games