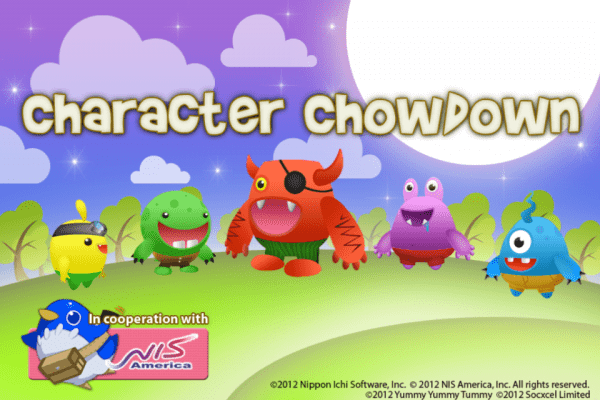 Nippon Ichi Software America have today announced something a little bit different from what they usually release, Character Chowdown, an educational puzzle game for iOS devices. The game is presented in a way they hope will aid students in learning new languages. Developed in cooperation with Yummy Yummy Tummy, Character Chowdown will feature cuddly characters and cameos from Nippon Ichi Software Inc.’s popular Disgaea series. Players can start learning the Japanese language with a free katakana pack. More language packs for hiragana and hundreds of kanji will also be available – possibly at a cost.

Here is the official blurb on the release:

Character Chowdown is an educational puzzle game designed to teach players how to read Asian language sets such as kana and kanji. Troublemaking Nommons will challenge players by making characters players have a difficult time recalling appear more often to reinforce what they are practicing. Designed to be played on the go, Character Chowdownis ready to satiate anyone eager to learn a new language.

Here are some of the games features they are promoting:

Deliciously easy: Players can learn hiragana, katakana, and hundreds of kanji characters in a fun, quick, casual way.
Progressive performance: A sophisticated system recognizes which characters players mastered and which ones they need to work on.
Additional heroes: Heroes and villains from the Disgaea series will make guest appearances in future downloadable content.
Fill up on achievements: Game Center achievements will be awarded for events such as learning all of the characters in a language pack and flicking monsters off the screen.
Say “Hi!” with postcards: Players can create and send digital postcards by decorating Nommons with accessories unlocked by completing language packs. Custom postcards can be shared through a user’s Facebook profile.
Start learning for free: Katakana, a Japanese language set commonly used for foreign words, will be released for free.

The game has no set release date, but is due for release for iPhone, iPad and iPod Touchdevices in Summer 2012.