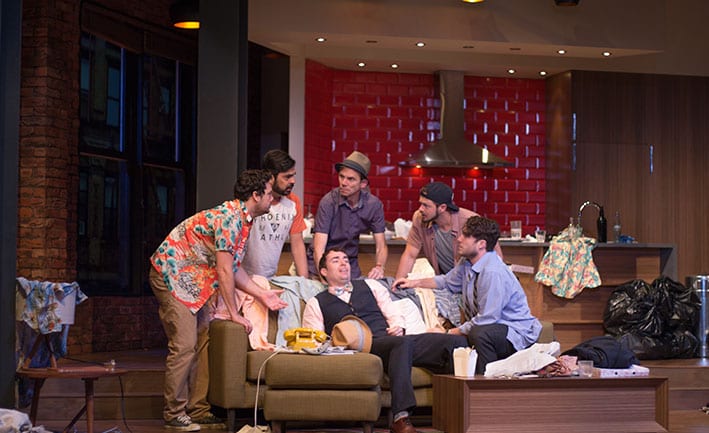 After five years with the Queensland Theatre Company, Artistic Director Wesley Enoch is set to take up a new role with the Sydney Festival. But before he leaves his current role, theatregoers have one more opportunity to see a production with him at the helm. Following previews over the next couple of days, the Queensland Performing Arts Centre (QPAC) Playhouse is set to host the QTC production of The Odd Couple starting Thursday October 22nd 2015, which will run until November 8th 2015.

Some may recognise the title from its recent television adaptation featuring Matthew Perry and Thomas Lennon, however this theatrical work is based on the original 1965 play written by Neil Simon. It tells the story of a despairing journalist named Felix Imgar (Tama Matherson), who ends up moving in with his recently-divorced friend Oscar Maddison (Jason Klarwein) after being kicked out of the house by his wife. Staying true to the show’s title, while buddies, these two have very profound personalities that conflict is one another. Oscar is a boozer, a big spender and a problematic gambler, while Felix is neat and fastidious. Can these two live together harmoniously despite their differences and recent relationship issues?

Their personality differences are further explored in the show’s promotional trailer below:

With the exception of those who are under 30 years of age (Who can nab themselves some really affordable $33.00 tickets for weeknights and matinee sessions), tickets to see The Odd Couple range from $52.00 to $82.00. Price differences depend on concession/senior status, session choice and seating preference. Tickets can be purchased via the QPAC website or box office.

Check back in the next couple of days for my one-on-one interview with Wesley Enoch, and a review of QTC’s The Odd Couple.