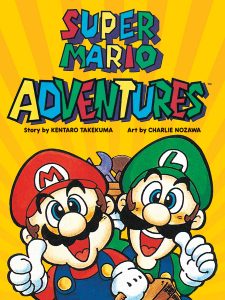 From 1992 to 1993, the tales of Mario, Luigi and Yoshi were presented in graphic novel form through Nintendo Power. These full-colour tales have been out-of-print for more than 20 years now. However, VIZ Media will be giving these chapters a chance to shine once again in printed form, this time to a whole new audience as of next month.

VIZ Media have confirmed they will be releasing Super Mario Adventures from October 11th 2016. All created chapters will be compiled into a single-volume edition, which will be available with an MSRP of $14.99 USD. The tale has been written by Kentaro Kawamoto, who has previously co-authored Even a Monkey Can Draw Manga The artwork on the other hand comes from Charlie Nozawa, who has previously published manga under the pen name Tamakichi Sakura.

This fantastic new edition will delight legions of video game, pop culture and comic fans with imaginative adventures inspired by Mario and Luigi from the classic Super Mario Bros. games. Join the fun as gaming’s most legendary pair of brothers attempt to rescue Princess Peach from the clutches of the Koopa King!

In the story, the peril-plagued Princess Toadstool is kidnapped by the diabolical deadbeat Bowser but super plumbers Mario and Luigi hatch a plan with their new friend Yoshi to rescue her. Are the Super Mario Bros plans a pipe dream? Can they stop the Koopa King before he forces the Princess to be his bride?!