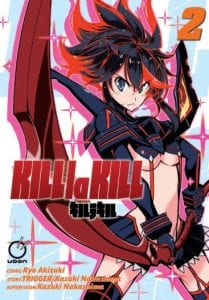 After leaving fans of Kill la Kill waiting for quite a few months following their October 2015 release of Volume 1, Udon Entertainment will be bringing Kill la Kill Volume 2 to store shelves this month. To be more specific, the volume is now available in select comic stores across North America, and will receive wider availability starting Wednesday 20 April 2016.

This is a manga adaptation of the original Kill la Kill TV anime, which was produced by Trigger and written by Kazuki Nakashima. Kill la Kill Vol. 2 sees transfer student Ryuko Matoi – now armed with Senketsu, an exceptionally powerful Kamui uniform – taking the fight directly to Honnouji Academy and its totalitarian leaders! But even with these newfound powers, will Ryuko be a match for the student council president herself, Satsuki Kiryuin?

As one might expect, this is a softcover, black & white manga – and is currently priced at $12.99 USD. Like Volume 1, this book has been created by Ryo Akizuki.