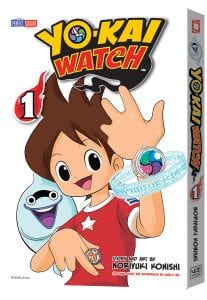 In the lead up to Nintendo launching the video game of Yo-Kai Watch on the Nintendo 3DS in the coming weeks, North American manga publisher VIZ Media have confirmed that they have launched the first two volumes of the Yo-Kai Watch manga series.

Inspired by the original video game, this supernatural comedy adventure series has been created by Noriyuki Konishi, and has been created as an appropriate manga for everyone – rated ‘A’ for All Ages. Volumes 1 and 2 of Yo-Kai Watch are each available with a print MSRP of $9.99 USD or $12.99 CAN. This title is available under VIZ Media’s Perfect Square imprint.

Yo-kai, inspired by the yokai of Japanese folklore, can’t be seen by the human eye, unless you have a specially designed Yo-kai Watch! In the YO-KAI WATCH manga series, Nate Adams, an average kid, who once armed with the Yo-kai Watch, can see all kinds of Yo-kai that no one else can. He instantly begins collecting new invisible friends and embarks on supernatural adventures!

YO-KAI WATCH is a fun kid-friendly, character-driven property that has become a major phenomenon in Japan, where it has captivated millions of fans of all ages, and we are thrilled to expand the scope of this dynamic property with the launch of the new manga series. We look forward to fans discovering the action and excitement of this latest addition to the VIZ Media Perfect Square catalog.