The team at manga and anime publisher VIZ Media have recently announced several new books and book sets in the Pokemon franchise, which they have planned for release in North America in the next couple of months. Published under their Perfect Square imprint, these sets include the third box set of the Black and White manga, box set four of the Pokemon Adventures manga and volume two of the Pokemon Black and White Pocket Comics series.

Information on all three releases can be found below:

Meet Pokémon Trainers Black and White! His entire life, Black has dreamed of winning the Pokémon League! Now he embarks on a journey to explore the Unova region and fill a Pokédex for Professor Juniper. White has an exciting career as the Trainer of a talented troupe of performing Pokémon. She dreams of making her Tepig Gigi a star! Together, Black and White continue on their journey… What surprising new Pokémon – and people – will they meet next?!

This series features artwork by Satoshi Yamamoto and a storyline by Hidenori Kusaka. The collection features Volumes 15-20 of the manga, in addition to a collectible mini poster. 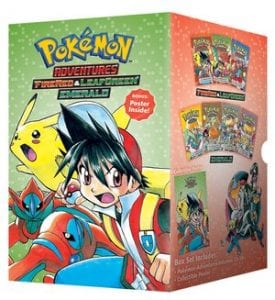 This set of volumes start off with Green about to meet her long-lost parents, but then they are sucked into a vortex created by a mysterious Pokémon! Red and Blue want to help, but first they must improve their battle skills. Then, the Three Beasts of Team Rocket are up to their old tricks again! In the EMERALD story arc, Gold and Crystal are back! Professor Oak sends the two friends to help rescue Red, Yellow, Blue and Green – who have all been turned to stone! But first, the pair must fight a fearsome creature that Archie, the former leader of Team Aqua, wished into existence using the powers of the Wish Pokémon Jirachi!

This series also features artwork by Satoshi Yamamoto and a storyline by Hidenori Kusaka. As you may already be able to tell, these volumes contain the ‘FireRed & LeafGreen’ story arc of the wider Pokemon Adventures manga series. 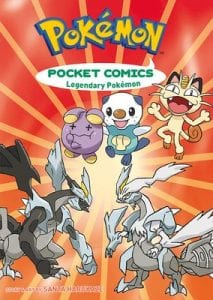 A pocket-sized book jam-packed with four-panel comic strips featuring POKÉMON BLACK AND WHITE characters, Pokémon vital statistics, Pokémon trivia, Pokémon puzzles, and Pokémon fun quizzes! To the forest! To the sea! To Legendary Island! Join our Pokémon pals on a quest through Unova for the Legendary Joke – while testing your Pokémon knowledge and laughing all the way!

This volume features a storyline and artwork by Santa Harukaze. I reviewed volume 1 last year, which received a solid score of ‘B’.