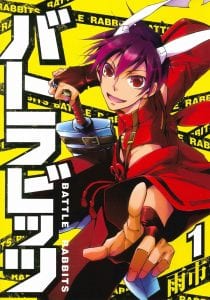 Continuing to announce manga series they have plans to publish beginning 2016, Seven Seas Entertainment’s confirmed they now hold the rights to Battle Rabbits. This is a new manga series produced by Amemiya Yuki and Ichihara Yukino – both of whom have collaborated together on the 07-Ghost Manga.

Seven Seas Entertainment are hoping to bring Battle Rabbits to store shelves in North America beginning July 5th 2016. Each book will be a single volume compilation, priced at approximately $12.99 US / $14.99 CAN each.

It’s impressive how the creative team Amemiya Yuki and Ichihara Yukino combine emotional story lines with strong action sequences, and we know there are a lot of fans of their previous work, 07-Ghost. Battle Rabbits introduces readers to another well-constructed world that combines fantasy and sci-fi story elements to great effect.

For more information on this series, read the official Battle Rabbits synopsis below:

Kokuryuu Kaguya was only a little boy when he witnessed his father murdered by demons. He spent years trying to convince people about what he witnessed, but was dismissed as a traumatized child with an over-active imagination. Now a teenager, Kaguya still remembers what happened.

One day, Kaguya is struck by a mysterious light and meets a young woman named Mao—a skillful warrior wearing bunny ears—who rescues him from a demons’ attack, then demands to know what planet he’s from! Kaguya finds himself inducted into a secret organization of other-worldly individuals whose goal is to defend Earth from monstrous invaders. Reborn as a Battle Rabbit, strange powers awaken within Kaguya which allow him to fight these creatures and seek vengeance for his father’s death.

Facebook
Twitter
ReddIt
WhatsApp
Pinterest
Telegram
Previous articleSeven Seas Entertainment Acquire Rights to I Was Abducted by an Elite All-Girls School as a Sample Commoner
Next articleAniplex of America to Publish Import Edition of Persona 3 the Movie #3: Falling Down in January 2016