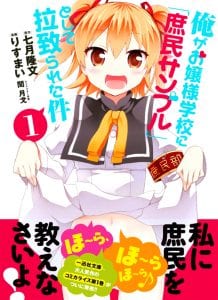 Seven Seas Entertainment have confirmed their acquisition of Ore ga Ojousama Gakkou ni “Shomin Sample” Toshite Rachirareta Ken (俺がお嬢様学校に「庶民サンプル」として拉致られた件), to be published as of next year under the comparably long English localised title: I Was Abducted by an Elite All-Girls School as a Sample Commoner.

This manga has been written by Nanatsuki Takafumi, and features artwork by Risumai. The series will be released in North America as single volume sets starting May 3rd 2016 through manga retailers for $12.99 US / $14.99 CAN.

I Was Abducted by an Elite All-Girls School as a Sample Commoner – the name’s a bit of a mouthful but it’s a good primer! This was a series we knew we had to publish. It’s a hilarious comedy that really plays on a lot of the tropes that people have come to expect and love in similar titles. With an anime adaptation on its way this Fall, we’re eager to introduce English readers to the manga series next Spring.

For more information on the manga series, read the official synopsis below:

Deep in the forest-covered mountains is an all-girls school, attended by children from only the richest and most prestigious of families. Here, the girls are raised to be perfect young ladies, cut off from the real world to preserve their innocence and ensure that they’re free from all distractions. This policy of isolation is a double-edged sword, however, for after graduation, students of the academy often struggle to adapt to a world that’s totally different from their cloistered school life.

To combat this inevitable culture shock, an average teenage boy, Kagurazaka Kimito, is kidnapped by the school to provide its students with knowledge of the outside world. Forced to enroll against his wishes, Kimito must now attend classes in a place where his very manhood relies on keeping the girls happy. Can one regular guy possibly survive in a fearsome, all-female student body?