Aniplex of America to Publish Import Edition of Persona 3 the Movie #3: Falling Down in January 2016 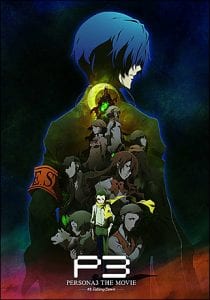 After handling the first two animated feature films, it should come as no surprise that Aniplex of America will be doing an Import Edition release of Persona 3 the Movie #3: Falling Down. Announced during their industry panel at Nan Desu Kan, they confirmed that this Import Edition will be released exclusively on Blu-ray from January 20th 2016.

Aniplex of America will be offering both a Collector’s and Standard edition of the film, which will have SRP’s of $99.98 USD and $74.98 USD respectively. While the Standard Edition just comes with the film, the pricier Collector’s Edition also includes an original soundtrack CD (including theme song “Light in Starless Sky”), “exclusive” box art, newly illustrated cover artwork, a 48-page deluxe booklet (subject to change prior to launch), 10 P3 Stickers and 3 Key Art Illustration Cards. The Collection will also come with an English Translation Booklet of the Deluxe Booklet. The contents are pretty much the same as their other two Collector’s Editions, albeit with content representing Movie #3.

Because this is an import edition, the film will only come with the original Japanese dub with English subtitles. Audio commentary and bonus content does not include subtitles however. It is currently unknown if or when Aniplex of America plan to commission an English dub for Persona 3 the Movie.

Official Synopsis for Persona 3 the Movie #3: Falling Down

“I kind of understand it now. You’re afraid of losing something, aren’t you?”

The season is now autumn. The days of battling the Shadows for Makoto Yuki and the members of the Specialized Extracurricular Execution Squad were nearing its end.

Determined to bring an end to the Dark Hour, Makoto and his team engage in countless life-or-death battles. As they continue to fight, some members face the death of their beloved friends and family, while some come to realize what they must fight for and others struggle to make sense out of all the bloodshed.

Then one day, Makoto encounters the mysterious transfer student, Ryoji Mochizuki. The wheels of fate begin turning as they reach the dawn of a new day…

And so begins a new battle to find their connections to one another.