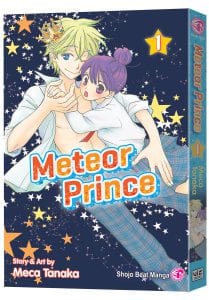 North American publisher, Viz Media, have announced that they have kicked off 2015 with the launch of a new shojo manga by the title “Meteor Prince“.

This is a romantic comedy about a princely alien that meets his match in a human girl. This series features story and artwork by Meca Tanaka, and will be offered under Viz Media’s Shojo Beat in both print and digital download formats. Digital distribution will be available through the VizManga website, Viz Manga App and through services such as Nook, Kobo, Kindle, iBooks, comiXology and Google Play.

As a short, two-volume series; the concluding volume will be released in North America this Spring.

Shojo manga fans will have a fun way to begin their new year with the launch of this adorable and hilarious romantic comedy. Hako’s atrocious luck has always been a deterrent for human boys, but an alien prince with super powers just may be Hako’s perfect match!

In METEOR PRINCE, strange accidents always seem to happen around Hako Natsuno – so much so that she’s been dubbed the “Queen of Bad Luck.” It’s hardly surprising then that a naked alien prince falls from the sky to tell her that out of all the girls in the universe, he’s come to Earth to mate with her. Does this mean Hako’s luck has changed, or…?