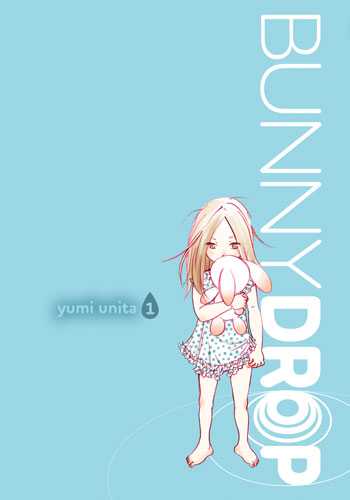 Wasn’t this discussion….
Supposed to be about who was gonna take care of Rin…?
All they’re doing is going through rehearsed lines and calling it a “discussion”…
Don’t tell me they arrived at the conclusion…
To this alleged discussion before it even got started…?

The manga that I mentioned in the previous post actually arrived this afternoon when I got home from university. This manga was at the top of the pile in the box so therefore it shall be the first one I shall be reviewing. I was not all that sure about the series originally, however I do remember it being mentioned here and there so I ended up purchasing it. Was it worth the money? Read on to find out!

Going home for his grandfather’s funeral, thirty-year-old bachelor Daikichi is floored to discover that the old man had an illegitimate child with a younger lover! The rest of his family is equally shocked and also embarrassed by this surprise development, and not one of them wants anything to do with the silent little girl, Rin. In a fit of angry spontaneity, Daikichi decides to take her in himself! But will living with this overgrown teenager of a man help Rin come out of her shell? And hang on, won’t this turn of events spell doom for Daikichi’s love life?!

This makes a change from apparently every other “Adopting Child” manga I have read as the main character actually is the one who offers the child a home instead of the child being forced upon him. Another key thing about the storylines appeal is that it focuses on a more serious, realistic storyline rather than one that will try and throw jokes in everywhere.

The storyline starts out with Rin being an anti-social aunt of the main character (Yes, technically Daikichi is looking after his younger aunt) however she soon starts adapting to the environment which makes her more social towards others. The biggest focus on the storyline is towards Daikichi, since he is tasked with finding daycare for her, struggling to balance his successful job and Rin and then dealing with Rin’s personality and actions which cause more hassles for him. Overall, this may sound boring, however I found it a very interesting concept with the whole getting the family to accept Rin aspect, as well as all the little mini-stories involved in each chapter.

The volume ends on a sort of cliffhanger, and depending on what you pick up in it, it will either be a rather interesting cliff-hanger or a rather lackluster cliff-hanger. Originally I was focusing more on the art and the ending part didnt seem that dramatic, however reading the previous few pages actually added more incite into what the cliff-hanger was about.

The only characters you will see in every volume guaranteed are Daikichi and Rin. Daikichi is a 30 year old man who after seeing the fights between his family, decided to become the guardian of Rin. He is seemingly successful at his job however after this turn of events, he seems to more more adaptable to it all then other protagonists in similar series.

Rin is the daughter of Daikichi’s grandfather and his mysterious younger lover. Her personality is one of an anti-social child who cannot socialise with anyone at the start and finds it hard to express the death of her father. During the events, she seems to be slowly getting over these events, however there are times when it is shown she is still stressed out about his passing. Overall through, I found her personality rather stubborn and demanding, however it did alter throughout the volume, depending on the situation.

Besides these two, a number of other characters appear, mostly consisting of Daikichi’s workmates when he tries to modify his job hours, the daycare classmates of Rin and more importantly, the family of Daikichi and Rin.

Graphics wise, you could not really call this manga cute as you could expect it to be. The character designs are well done, often portraying the characters emotions relatively well, and in certain scenarios, the characters faces would take a more simplified design which was really effective when used. What I liked also was that none of the characters had the same clothing designs on a repeated basis and they alternated characters clothing a number of times to suit the environment and activity of the day, usually I do not notice changes like this but for some reason it did stand out. If you are expecting something sugarry cute in regards to character designs and that is the primary reason for purchasing the title, then I would suggest looking elsewhere.

For the backdrops, there was a considerable amount of white backgrounds throughout the volume, however for the most-part, there were decent backdrops that were not half hearted, so if they were in town, there would be some well designed buildings in the background, if they are driving around the countryside then they would have farms around et cetera. Infact, just browsing through the book now, they actually drew attention to the environment they were in by drawing different parts of the town without any characters in them, showing off some of the artists great designing skills.

The book wasn’t overflowing with extras, however there was decent extra content overall including:

I can see that this would not cater to everyones tastes, however I found that it has a very interesting storyline that had an interesting focus on the development of all the characters.  Despite the comments about the artwork, I thought it was much more appropriate in relation to the storyline than if it tried to play the cutesy card. I would highly recommend that people check this series out through!

Bunny Drop is being published by Yen Press. Currently only the first volume has been released with a second volume coming out in September 2010. This is my first manga review in a while but I hope you enjoyed it!