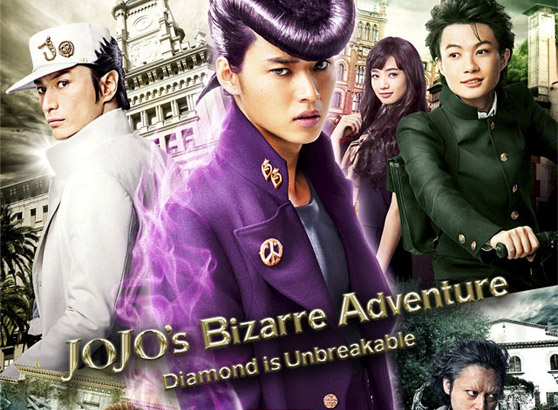 By virtue of its name, Madman Entertainment’s AnimeLab video-on-demand streaming service is all about delivering an incredibly diverse library of animated works to Australian and New Zealand audiences. While 99.9% of its content is anime, as a rights-holder to films, we get the odd opportunity to see a live-action offering on the service. Today, the feature film JoJo’s Bizarre Adventure: Diamond is Unbreakable became streamable.

This is a live-action instalment in the long-running Jojo’s Bizarre Adventure multimedia franchise, initially starting as a manga series written and illustrated by Hirohiko Araki. JoJo’s Bizarre Adventure: Diamond is Unbreakable adapts the original manga/anime story arc of the same name. Released in 2017 and staring Kento Yamazaki (Josuke Higashikata), Ryunosuke Kamiki (Koichi Hirose) and Nana Komatsu (Yukako Yamagishi), it is the only live-action instalment in the series to date.

JoJo’s Bizarre Adventure: Diamond is Unbreakable is only available to AnimeLab premium subscribers. If you are a subscriber, you can begin watching HERE.

With this Stand, I will protect those I love

In 1999, a mystical Arrow – which can manifest latent supernatural abilities known as ‘Stand’ – travels throughout the town of Morioh, Japan. A high school student named Josuke Higashikata and his friends are thrust into a new world they never knew existed, having to face off against deadly Stand users whilst trying to uncover the mysteries of the Arrow itself and how to stop its wielder.

Ahead of seeing Sword Art Online: Progressive in cinemas, do you have the urge to binge-watch...

Releasing in select cinemas across the country from 26 August 2021, Australian anime publisher...
Previous articleSuper Mario 3D All-Stars Is The Nostalgia Trip We All Need During This Pandemic
Next articleMadman Entertainment’s Anime Festival Sydney 2021 Event Cancelled
Twitter Youtube
© The Otaku's Study