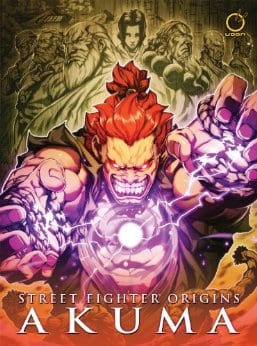 Akuma! The world’s most feared martial artist, mentioned only in whispers. Few have dared to challenge him, and even fewer have survived to speak of the nightmare! Master of the Fist, wielder of the Dark Hado… but he was not always trapped on the path of chaos. Featuring story by Chris Sarracini and art by Joe Ng, this original graphic novel mixes a surprising and intense coming-of-age story with the all-out action that Street Fighter fans love! Street Fighter Origins: Akuma reveals the secrets of this dark figure’s past for the first time, and shows how a frustrated young man grew into the mad demon!

Street Fighter Origins: Akuma is a 128 page, hardcover original graphic novel retailing for $34.95. It is available in comic stores, book stores, and wherever comics are sold – although will be easier to find in regions directly serviced by Udon such as North America. Akuma is also available digitally from ComiXology alongside their other books.