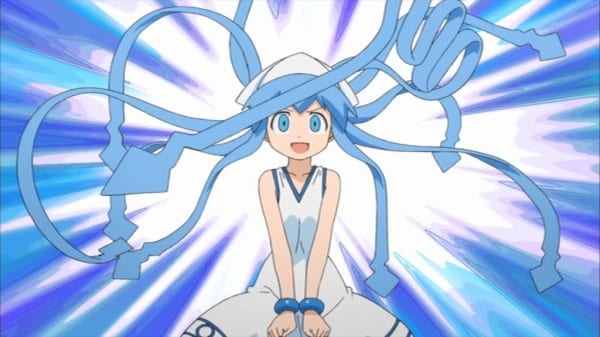 A few years ago, North American anime publisher Media Blasters dubbed and released the first season of Squid Girl (Shinryaku! Ika Musume | 侵略!イカ娘) in North America. While it may not have had much of a constructive storyline, it was nevertheless an entertaining and well dubbed season – and I was looking forward to more. Unfortunately its subsequent seasons were never released in the English market… until now.

Sentai Filmworks have confirmed their acquisition of the Squid Girl franchise, covering seasons one, two and the OVA episodes. These rights cover not only home video and digital outlets, but also television. Could this mean that we could see the show begin appearing on television screens across North America soon?

Squid Girl is based on the original manga series by Masahiro Anbe, which received 22 volumes from 2007 until earlier this year. This animated adaptation was directed by Tsutomu Mizushima (Girls und Panzer), with series composition by Michiko Yokote (RIN-NE) and animation by diomedéa (Gingitsune). You can read more about this anime below:

The cutest little tentacle-haired invader from the sea, Squid Girl, has come to subdue humanity! Unfortunately, she’s in hot water with the Aizawa siblings after a demonstration of her squid powers destroys their restaurant, the Lemon Beach House. Now, she’s forced to work as a waitress for them until she pays off her damages. Between her aquatic puns, bickering with the Aizawa sisters, tiffs with customers, and the many misadventures that come with seaside life, Squid Girl has her hands, and her tentacles, full!

Check out my review of season one HERE.