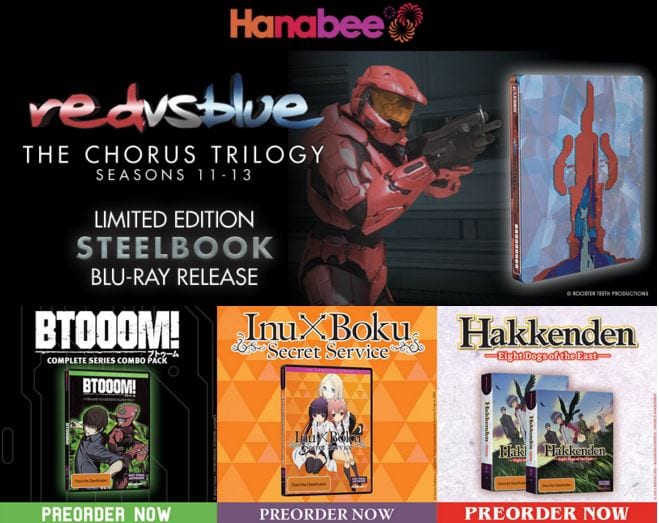 Kicking off the long weekend, Australian anime publisher Hanabee have unveiled just what is part of their July 2016 line-up for fans of both anime and Rooster Teeth titles.

The biggest announcement for the company seems to be their first ever Red vs. Blue SteelBook release, which the Rooster Teeth Animation creative team worked closely with Scanavo’s design team to produce. This Limited Edition SteelBook set will contain Seasons 11-13 of the Red vs. Blue series, which has gone by the title “The Chorus Trilogy”.

We’re ecstatic not only to collect the entire Red vs. Blue: The Chorus Trilogy into one set, but for RvB to be Rooster Teeth’s very first SteelBook release! We love the case’s art design and hope the fans will be as proud as us to have such a cool edition on their shelves.

Scanavo believes in injecting an element of fun into our work, a philosophy that is shared by the incredibly talented team at Rooster Teeth.  As a result, we’ve been able to produce an innovative SteelBook® that will surprise, delight, and hopefully bring some magic to the unboxing experience

In addition to this Limited Edition set which will be available via their Rooster Teeth Australia store, Hanabee have also confirmed plans to release two special edition combo’s and a box set through their anime-oriented online store. More information on all these titles, available from July 14th, can be found below:

For more than a decade, the hapless, helpless anti-heroes of Blood Gulch – the Reds and Blues – have fumbled their way from one adventure to another. They’ve survived bloodthirsty bounty hunters, evil AI fragments, and taken down some seriously strange military organizations. You’d almost think they knew what they were doing… almost.

The Chorus Trilogy is a new chapter in the Red vs. Blue saga, and what starts with a simple shipwreck quickly evolves into one of the greatest adventures the galaxy has ever seen. Between comedy, drama, and over-the-top action, The Chorus Trilogy box set is bursting at the seams with RvB goodness.

The Reds and Blues are in for the fight of their lives. What do you fight for?

Be careful what you wish for.

Ryouta Sakamoto has suddenly been transferred in to a deadly high stakes game. A game he is all too familiar with. Left on a mysterious island with a set of provisions, a bag of bombs and a strange crystal embedded into his left hand. This is the world of Btoom realized. Beautifully replicated, this game of Btoom is an all out dog eat dog world, where to escape you will need to kill seven others before they kill you. But there’s a difference between a game and reality.

When a death is a death and there are no second lives, Ryouta is about to learn the value of a life.

If it’s not her family’s high status in society driving people off then it?s her cold, caustic personality and sharp remarks that are. Staunchly independent to a fault Ririchiyo decides to move in to the Maison de Ayakashi, a selective apartment complex for the super elite, or so everyone thinks. The residents here at the Maison de Ayakashi, hide a secret that requires their own personal Secret Service. Belonging to families who have all mingled with the supernatural, the residents here have all wound up inheriting their powers whilst still remaining human.

As a consequence they’ve become vulnerable to actual attacks by these actual supernatural creatures and thus need protection from them. Although Ririchiyo has rejected such company during her stay, she inevitably finds herself with the Secret Service agent, Soushi Miketsukami, at her disposal nonetheless. Soushi, obedient to a fault, just might be the answer to Ririchiyo’s problems. She just needs to acknowledge this fact is all.

From a tragic incident that desolated an entire village, emerged only three survivors – two boys and a girl. After the tragedy Shino Inuzuka, Sosuke Inukawa and Hamaji now all live a quiet life in a church miles away from their hometown? But greater forces are after them and it seems to tie not only with their past but to a crow by the name of Murasame that Shino owns.

Can the trio return to their peaceful life or will they forever be cursed to relive their past?