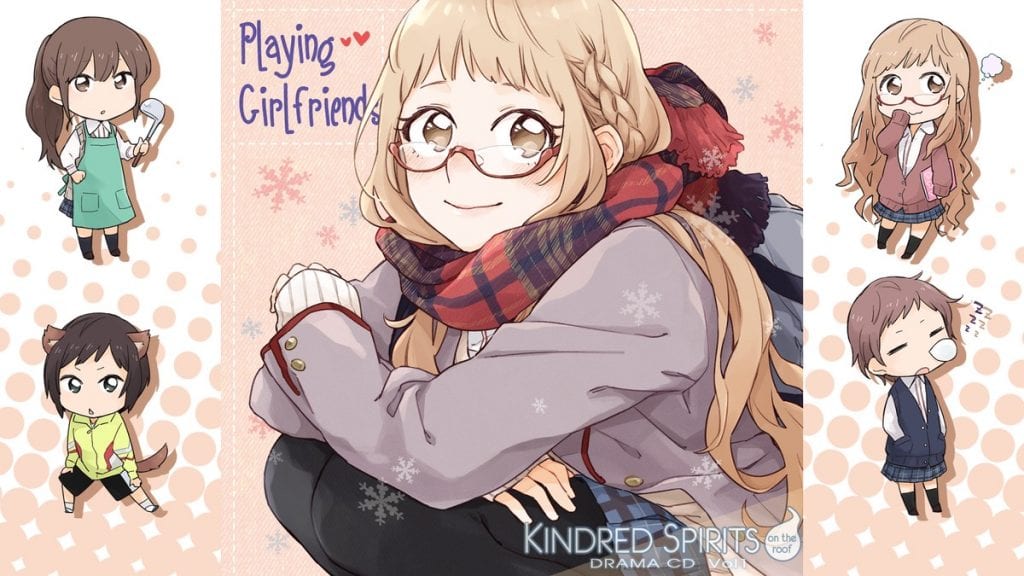 December. A new season and Ano’s attracting attention once again. She’s politely turned down those who have come to her directly with confessions of love, but some continue to watch her from afar, almost to the point of being stalkers.

Yuna and Nena are helping her out, but it’s starting to wear on Ano having her fans follow her all the way home.

So when Hina suggests a “Fake Couple Strategy”…

During Anime Boston last month, international visual novel publisher MangaGamer announced their plans to release the four drama CD’s created for Kindred Spirits on the Roof. Each of these drama CD’s will be released individually, but given they feature Japanese dialogue, will only be available as video files.

The first drama CD titled “Playing Girlfriends” will be available for purchase via Steam and MangaGamer’s own online store starting Tuesday 26 April 2016. While the price will be consistent at $9.99, there are a few differences between both online stores however.

Those who purchase via Steam will receive the video file which encompasses the first CD. According to the Steam store this content is only available in an online streaming format, with more information about what this entails available HERE. The Steam store product page can be found HERE.

Those who purchase through the MangaGamer online store however will receive not only the localised video file, but also the original audio tracks, bonus sound files and backgrounds as exclusive items. Pre-ordering will also net you a full dollar off (10% discount – $8.95). Orders through MangaGamer can be made HERE.

Certain that you want to purchase the four drama CD’s but don’t want to have to make individual purchases? MangaGamer are also offering a full set bundle priced at $39.95. More information on this set can be found on the MangaGamer website.