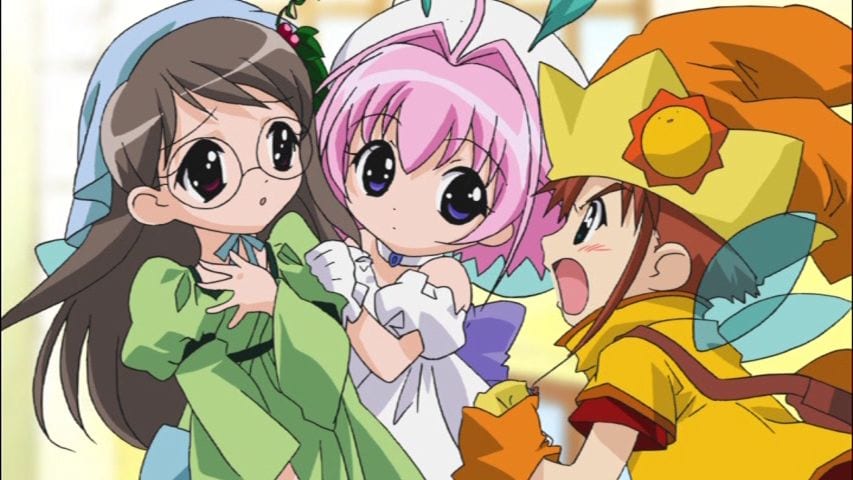 With a bunch of new and old titles ready to hit store shelves, North American anime publisher Sentai Filmworks have confirmed what will be available for anime fans to purchase in May 2016. This includes a range of Sentai Selects titles (Azumanga Daioh, A Little Snow Fairy Sugar), license rescues (Strawberry Marshmallow) and brand new releases (Fruit of Grisaia Season 1, Log Horizon 2). You can find a full list of their planned titles below:

For the members of Miss Yukari’s English Class, a typical day may be just a little unusual.  Part of that’s due to Miss Yukari herself, whose teaching style (and personal ethics) tend to be odd, improvisational and spontaneous, but her students are just as unconventional:  There’s 10-year-old Chiyo, still at the top of her class after skipping five grades, and her opposite Ayumu “Osaka” Kasuga, whose poor grades are surpassed only by her horrific skill at sports.  Then there’s Tomo, a competitive slacker who puts excessive energy into doing very little, and Koyomi, whose surprising maturity is compromised by a malevolent sense of humor.  Tall, statuesque Sakaki’s athletic exterior hides both unexpected shyness and a most unfortunate obsession with cats, while tiny Kaori’s heart is mainly obsessed with Sakaki.  They may all seem like perfectly normal girls on the outside, but even their most mundane activities magically become the most extraordinary adventures as they learn all about life, the universe and affairs of the heart in AZUMANGA DAIOH!

When young Saga offers a waffle to a small hungry creature in a fluffy outfit, she has no idea that the “creature” is Sugar, an apprentice fairy sent to Earth to find a “twinkle” as part of her test to become a full-fledged season fairy!  Unfortunately, neither Sugar nor her two companion fairies, Salt and Pepper, have any idea what a “twinkle” is, but that doesn’t stop them from moving in with the unusual girl who can somehow see them!  And since none of Saga’s friends can see fairies, they all think that Saga is acting really strange.  As more and more season fairies keep arriving, Saga’s bemusement turns into desperation.  Can she find out what a twinkle is and help the fairies find one before she’s drowning in fairy dust?  The answers will surprise you in the hilariously sweet adventure LITTLE SNOW FAIRY SUGAR!

Yuji Kazami thought that all he wanted was to attend school like a normal teenager, but Mihama Academy is nothing like the places of education he’s dreamed of.  And it’s not just that Mihama seems eerily like a prison.  There are also only five other students, and all five of these girls seem to have special reasons for having been placed in this institution. Sachi Komine, who always wears a maid outfit and seems to be compelled to carry out any order given her.  The unsettling Makina Irisu, whose parents are tied to Japan’s shady underworld.  Michiru Matsushima, a combative girl afflicted with dual personalities.  Car and motorcycle obsessed Amane Suou.  And Yumiko Sakaki, whose “welcome greeting” to Yuji involves the deadly use of a box cutter.  Of course, Yuji himself has his own dark secrets, as one of his new fellow students may be the next deadly target on his own hit list in FRUIT OF GRISAIA!

Nobue Itou may be attending college, but her real lessons come from dealing with her 12-year-old sister Chika and her equally adorable friends.  There’s Miu Matsuoka, the troublemaking girl next door who’s never found a diabolical plan that she wasn’t willing to hatch.  Then there’s the perplexing Ana Coppola, who was born in England but has lived in Japan for so long that she’s forgotten most of her English and is unsuccessfully attempting to re-learn her British heritage based on some rather erroneous assumptions.  After those two handfuls, shy, sensitive Matsuri Sakuragi should be a welcome dose of normality, but unfortunately Matsuri is also incredibly gullible.  And then there’s Chika herself, who’s actually the most mature and sensible person in the Itou household… which comes in handy when her older sister attempts to raid Chika’s savings in order to buy cigarettes!  Get ready for a cute overload so intense that it can be used as a deadly weapon when slices of everyday life get whipped to frothy perfection in STRAWBERRY MARSHMALLOW!

The convoluted path that has reunited Tatsumi and Esdeath takes another twist as they find themselves transported to a remote island where their strength will be tested as never before.  Dr. Stylish may be dead, but Danger Beasts still remain, and that’s only the first challenge the two enemies now face.  If the bonds of love weren’t enough to bring their fates together, could the fire of combat forge a new form of alliance?  Meanwhile, the embers of rebellion are being stoked into open insurrection by the pacifist organization Path of Peace.  Drawn into the impending inferno, Night Raid and the Revolutionary Army prepare for a major assault on the Capital.    But while their Imperial Arms may be indestructible, their wielders are merely flesh and blood.   On the anvil of battle, only human courage and the willingness to give their lives for a cause will lead to the ultimate triumph or failure in AKAME GA KILL!  – COLLECTION TWO!

It’s official.  Musashino Animation’s next production is “Third Aerial Girls’ Squad!”  In a surprising turn of events, Aoi finds herself assigned as the production manager for the project, but from the very beginning it looks like she may be overwhelmed by the sheer magnitude of the project.  Of course, her old friend Ema is already aboard as one of the animators, while Midori makes an enormous contribution by taking on many of the program’s important research duties.  And when Misa’s new company contracts to produce CG for the series, all but one of the members of the old animation club are working on the same production!  Left out again, Shizuka auditions for a role, but, as a relatively new voice actor the odds of her being cast in a major part seem highly unlikely. That doesn’t break the bonds of their friendship, however, and there are tons of surprises ahead as TAGS’s journey to broadcast draws to the finish in the second collection of SHIROBAKO!

It’s been six months since the event that trapped thousands of players in the online game world of Elder Tales and the situation is far from secure.   The People of the Land are engaged in open warfare against the Goblin armies of Zantleaf.  Minami spies are infiltrating the populace.  And even with the support and guidance of the Round Table Alliance, the cost of sustaining the city of Akihabara is causing the entire infrastructure to teeter on the brink of collapse.  With winter coming, Shiroe and his companions are forced to consider their options.  Should they stay in Akihabara and attempt to weather the oncoming storm?  Or should they gamble on missions to other portions of the world in search of new sources of valuable treasure?  The launch of another series of raids will test old alliances while new ones are forged, as the adventure continues in the second season of LOG HORIZON!

The first wave of madness that consumed the town of Hinamizawa in 1983 may be finished, but the nightmare is far from over as the time loops that have ensnared the populace continue to wreak carnage and mayhem.  As the survivors struggle to cope with the lethal aftermath, the annual cycle of betrayal and murder continues, and only Rena-ironically spared as she was safe in jail after her arrest for her part in the bombing and massacre-may hold the keys to unlocking the mystery.  Get ready for a grim post-mortem as Mamoru Akasaka and Officer Oishi dig into the past to solve the hidden secrets of the Great Hinamizawa Disaster, while Keiichi, Rika, Satoko and the others fight to stay alive as the nightmarish Curse continues in WHEN THEY CRY – SEASON 2!

Typically, you would expect the US-based publisher Yen Press to localise and publish manga and light novel works. But today's announcement sees them drifting from form...
Read more
Anime