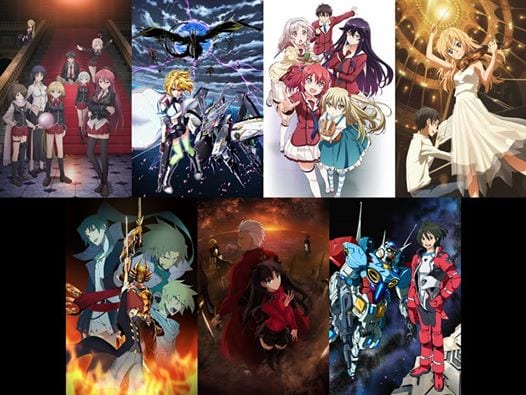 Over the last week, Australian anime publisher Madman Entertainment have been adding a number of new simulcast series to their newish AnimeLab video-on-demand service. While not all will eventually be published by Madman (With Fate/Stay Night: Unlimited Blade Works being published by Hanabee for example), they will all be conveniently available for anyone in Australia and New Zealand to watch in one location… at completely no cost.

A full list of titles can be found below:

The turbulent era known as the Universal Century has ended. Now, mankind looks towards prosperity and peace in the new era known as the Regild Century (R.C.). One of the most important resources in this era is the Capital Tower – a space elevator which towers over the land connecting Earth to space. Its purpose, to transport the Photon Batteries the Earth relies on for power. It is worshipped as a holy place. Tasked with protecting the tower, one day on a practice mission, young Capital Guard cadet, Bellri Zenam is attacked by a high-performance G-Self mobile unit. Despite having never before encountered the G-Self unit, he feels a strange connection to it and its pilot, a space pirate called Aida Rayhunton. Little does Bellri know that he is about to uncover truths which will shake the entire Regild Century.

Angelise is the first princess of the Empire of Misurugi. She is the celebrated ruler of the Empire until one day she finds out the shocking truth that she is a “Norma” – an irregular being who cannot use “Mana”, and are treated as “things” rather than people. Having her name taken from her, Ange isolates herself on a remote island. There, she finds a group of Norma women who spend their days hunting dragons that have come to invade.

From Trigger, the studio that brought you the mega hit Kill la Kill! A group of five boys and girls suddenly acquire supernatural powers. Ready to fight in galactic battles to defend human cause they are struck by the realization that there are no wars, no conspiracies, no evils empires, no nothing in their high school life. They instead decide to idly have fun by wasting their powers away.

The King’s close advisor implemented a large-scale witch-hunt. The tragic victims of this hunt were not witches, however, but Makai Knights and Makai Priests. One Makai Priestess gave birth to a child while being burned at the stake. That child carried the bloodlines of the Golden Knight. Although he was saved by his father, a Makai Knight himself, the newborn, León Luís, suffered greatly from the unjust death of his mother. And so he vowed to learn the ways of a Makai Knight from his father, Germán Luís, and use his training to seek revenge. During his battles against the demons known as “Horrors,” León must gradually approach reality and accept the truth. Meanwhile, the powerful former adviser to the King, Mendoza, banished Prince Alfonso and his mother while the king was bedridden. Eager to reclaim his kingdom and save his people, Alfonso embarks on a quest to find the legendary Knight – but destiny holds a twist of fate in store for him. Together, León and Alfonso begin long and difficult journey filled with many hardships.

Pride, Envy, Wrath, Sloth, Greed, Gluttony, Lust. These are the seven sins laid upon seven girls who rule over Biblia Academy. To retake his world, the boy decides he must control these sins… The boy, Arata Kasuga, has had the world he knows by a mysterious “Collapse Phenomenon”, and his cousin Hijiri disappears into another dimension. To understand the Collapse Phenomenon and win back his cousin, he comes to Biblia Academy. There he finds the seven girls and their sins.

Kousei Arima was a genius pianist until his mother’s sudden death took away his ability to play. Each day was dull for Kousei. But, then he meets a violinist named Kaori Miyazono who has an eccentric playing style. His monotonus life was about to change forever.

Fuyuki City – a city surrounded by the ocean and the mountains becomes the setting for an age-old ritual. To realize the mythical Holy Grail, which is said to grant any wish from its possessor, seven masters are given seven heroic spirits chosen by the Grail. These heroic spirits or servants are: “Saber” “Lancer” “Archer” “Rider” “Caster” “Assassin” “Berserker” Each master will enter into a contract with their assigned servants and battle the other masters and servants to the death until only one pair remains… This is the “Holy Grail War”.