With the new month upon us, this means that Australian anime publisher Madman Entertainment have unveiled what they will be unleashing upon Aussie audiences in two months time. Unlike their relatively small release slate for March 2014, the company are pulling out a very sizable set of anime titles which will all be available to purchase from the 16th April 2014. 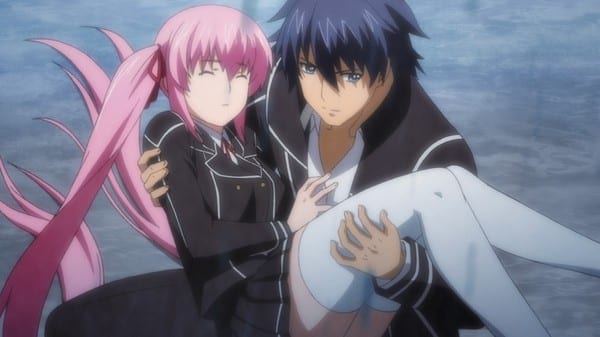 After saving a fairy-tale kingdom, Akatsuki returns to the real world with his prize – Miu, the busty daughter of the defeated Demon King. It’s one hell of a happy ending until they’re forced to enroll at a school for magic users. There, Akatsuki can’t keep his hands off the girls, Miu’s constantly ballooning measurements make her a walking wardrobe malfunction, and it seems like someone is always plotting against them.

Jam-packed with extreme action and comedy, you’re in for a bouncy ride that’s sure to have you bursting at the seams. Lock your door and close the blinds: Akatsuki and Miu are about to take you places you never knew you wanted to go. 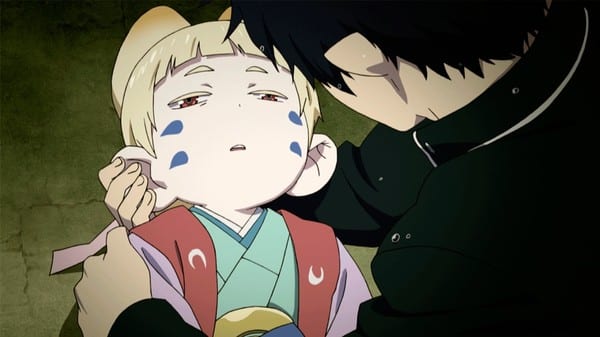 When his adopted father, Shiro Fujimoto, was killed by his biological father, Satan, Rin Okumura swore to become an exorcist to avenge Shiro’s death declaring war on his own blood-relatives of the underworld…

Everyone is in the midst of preparing for a festival which is celebrated once every 11 years in True Cross Academy Town. However, behind the scenes in the shadows, a “Phantom Train” goes berserk while the barriers protecting the town from demon intrusions are under repair. Rin, Yukio, and Shiemi are sent to exorcise the Phantom Train, but as usual Rin complicates the situation.

Amidst the chaos, Rin meets a demon in the form of a young boy. Meanwhile, Cheng-Long Liu, a Senior Exorcist First Class from the Taiwan Branch joins Shura in the repair operation and the story takes an unexpected turn as all their fates cross… 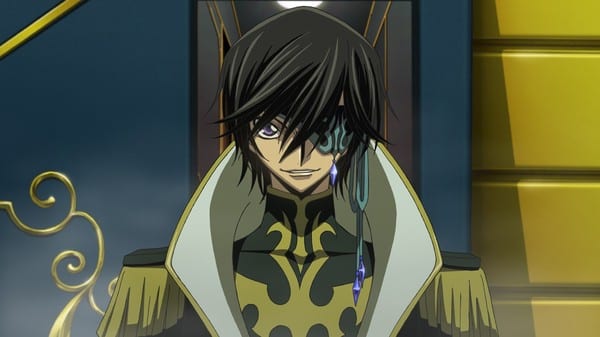 2017 a.t.b. (Revolutionary Year 228), the war between Euro Britannia and the European Union (E.U.) continues. At a disadvantage, the E.U. army founded a special team consisting of Elevens – exiled Japanese who had their country occupied by Britannia – known as the W-0 Unit. And then, new orders are given to the W-0 Unit. Their cruel contents order them to land in the middle of the enemy as a diversion. The pilots of the W-0 Unit consist only of the commanding officer, Leila, the only surviving Japanese from their last battle, Akito, and the three rebels: Ryou, Yukiya, and Ayano. With everyone holding their respective expectations, the operation moves forward. On the other side in Euro Britannia, Shin, who made his benefactor commit suicide with the mysterious power of “Geass”, is appointed the leader of the Knights of St. Michael. As Shin steadily advances for the sake of his own ambition, he and his subordinates in the Ashura squad are given orders to deploy.

In the midst of the extremely ghastly battlefield, Akito and Shin finally face each other as Akito displays his fearsome true power! 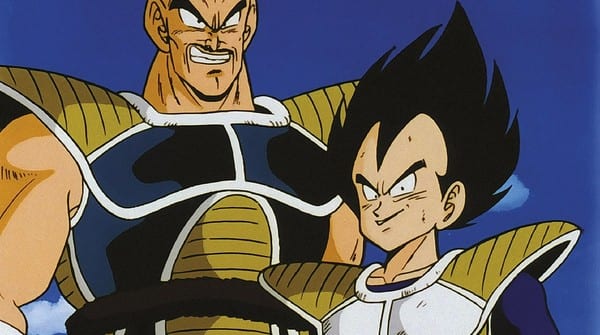 The Saiyans are coming! These ruthless, intergalactic villains carved a path of destruction across the galaxy, and now they’re headed for Earth! The evil Saiyan warlord Vegeta will not rest until he’s seized the wish-granting powers of the Dragon Balls for himself! For the first time ever, the Dragon Ball Z season sets are available on Blu-ray! This epic collection presents the first thirty-nine episodes of the legendary series in remastered, high definition quality and 16:9 aspect ratio using frame by frame, pan and scan technology. An elite team of Capsule Corp. scientists worked around the clock to put the greatest anime in history on the cutting edge of modern technology. You may think you’ve seen all there is to see in the DBZ universe, but you’re wrong. Take home this thirty-nine episode collection today, and fire your next Kamehameha in the brilliance of Blu-ray! 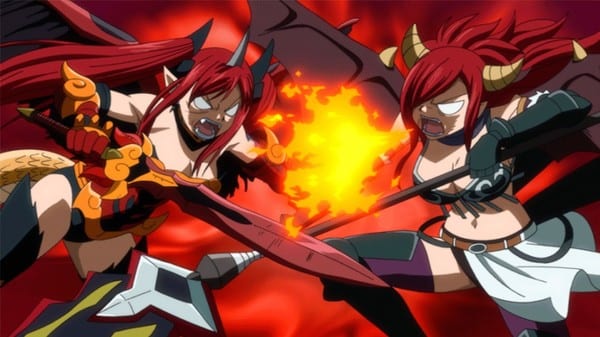 The guild is trapped in a parallel world run by an insane king determined to steal every last drop of magic power from Fairy Tail. Spells start flying as the wizards square off against the fiercest warriors of the royal army, humans rebel against cats, and Erza goes head-to-head with her evil doppelganger in a battle that lays waste to an entire city.

When the power-hungry monarch harnesses the power of the Dragon Slayers, he ignites all-out war. But his ambition doesn’t stop there: once Natsu and his teammates are out of the picture, he’s heading to the Fiore Kingdom to steal all of its magic as well. Fairy Tail’s actions will decide the future of two worlds, but they’ll be lucky if they can save even one of them.

The fate of two worlds is in their hands. 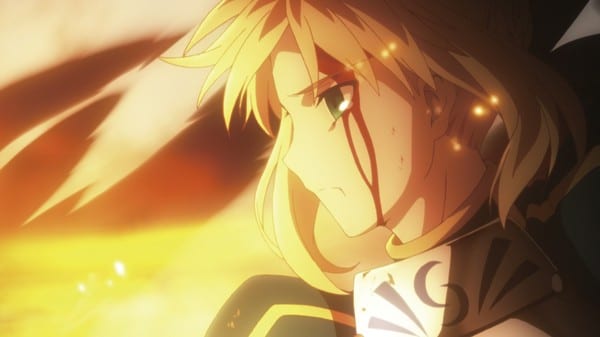 The story starts from zero: the beginning…

The Holy Grail War – in this ultimate battle field, in order to obtain the power of the “Holy Grail” that grants any unattainable wish, seven “masters” summon “servants” and fight against each other until the last one survives.

As the 4th Holy Grail War becomes more furious, one by one the masters and their servants are being eliminated from the war by losing in a battle or falling into an opponent’s plot. What will Saber and Kiritsugu find out at the end of the war? And which team will win the war and the Holy Grail? 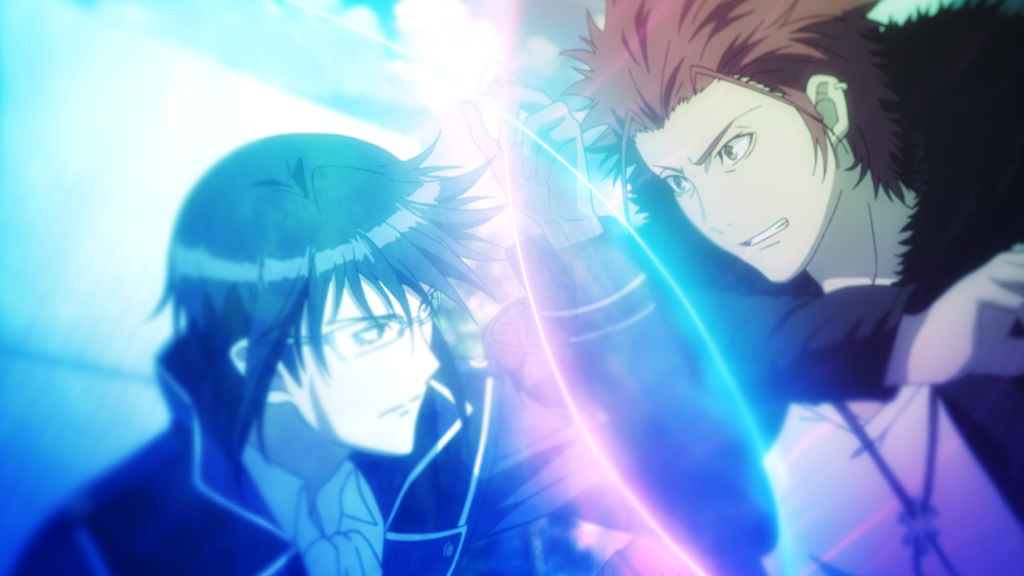 Shiro is an easygoing teenager content with just being a student – until his seemingly perfect life is halted when a bloodthirsty clan, glowing red with fire, attempts to kill him in the streets. Unbeknownst to Shiro, he is suspected of murdering a member of their clan and will need a miracle to escape their vengeance. Miraculously, a young man named Kuroh Yatogami swings in and aids Shiro in his getaway, only to reveal he’s also after Shiro’s life.

Now a hunted man, Shiro will have to evade the clans of seven powerful kings and desperately try to prove his innocence – before it’s too late! 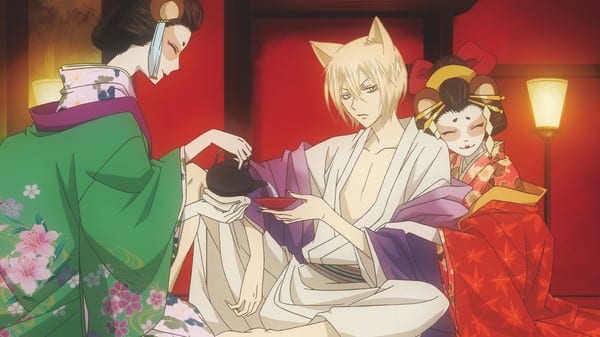 Nanami was just a normal high school girl down on her luck until a stranger’s lips marked her as the new Land God and turned her world upside down. Now, she’s figuring out the duties of a deity with the help of Tomoe, a reformed fox demon who reluctantly becomes her familiar in a contract sealed with a kiss.

The new responsibilities – and boys – are a lot to handle, like the crow demon masquerading as a gorgeous pop idol and the adorable snake spirit who’s chosen the newly minted god to be his bride. As the headstrong Tomoe tries to whip her into shape, Nanami finds that love just might have cute, pointed fox ears. With romance in the air, will the human deity be able to prove herself worthy of her new title? 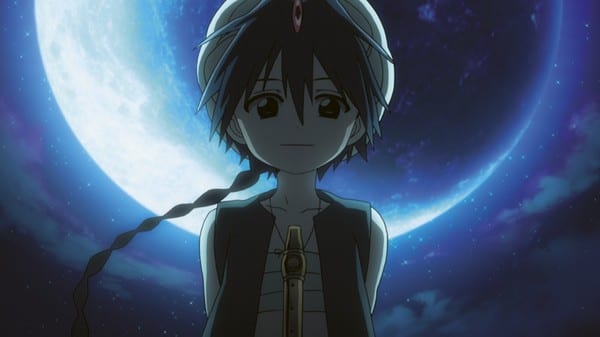 “A young boy, Aladdin, travels a mysterious continent that is home to a mysterious ruin known as the “Dungeon,” in which great treasure is said to lay hidden. During his travels, the young boy meets Alibaba, and together they attempt to clear the “Dungeon” in order to claim the treasures within.  As their quest brings about new encounters and farewells, Aladdin will come to learn of his true destiny.” 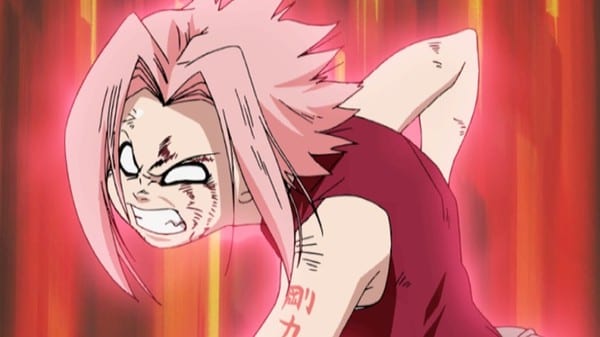 Deep within the Hidden Leaf Village, sharp and cunning Ninja possess an ultimate power while Naruto Uzumaki carries inside the ultimate secret. Twelve years ago, the fourth Hokage sacrificed himself and saved the village by sealing the Nine-tailed Fox Spirit – an orphaned baby boy. Now, this plucky prankster must do what it takes achieve this life-long goal and become the next Hokage! 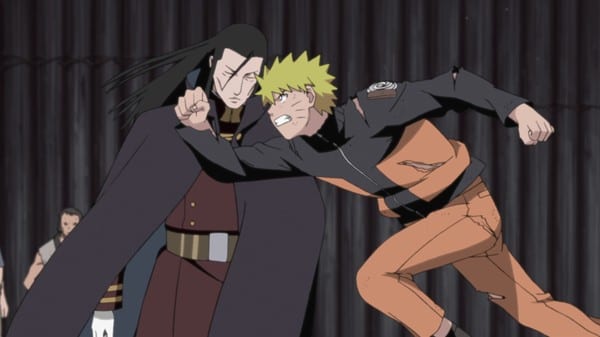 Naruto is convicted of a serious crime he didn’t commit and is sent to the inescapable prison, Hozuki Castle. The warden, Mui, quickly seals away Naruto’s chakra to prevent him from rebelling. Refusing to give up, Naruto plans his escape while also befriending his fellow inmates Ryuzetsu and Maroi. But he can’t help but wonder what their ulterior motives are… 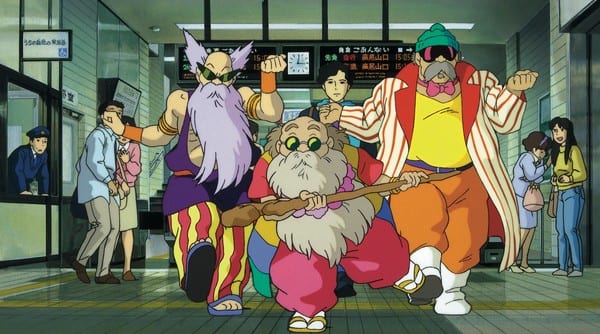 POM POKO is a tale of the clash between modern civilization and the natural world.

The Raccoons (Tanuki) of the Tama Hills are being forced from their homes by rapid urbanisation. As it becomes harder to find food and shelter, they decide to band together and fight back. Once they perfect the ancient art of transformation, they use their power, often in hilarious ways, to try to scare off the advancement of civilization. Will it be enough?

Celebrate the magic of the forest and the beauty of the creatures who live among us in POM POKO — on Blu-Ray for the first time ever. 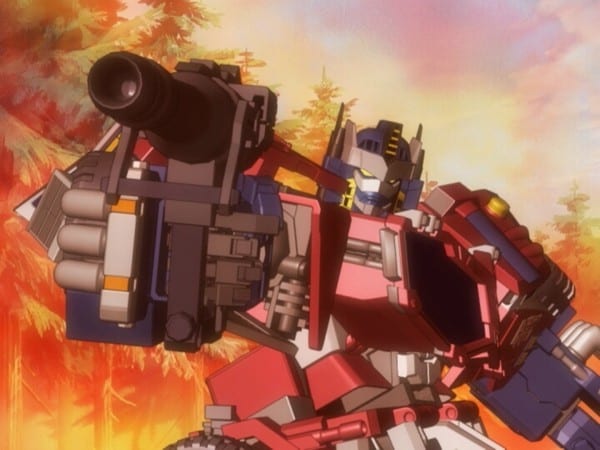 CYBERTRON, the TRANSFORMERS’ home planet, is on the brink of destruction as an ominous Black Hole looms. In order to save their world, the TRANSFORMERS embark upon an intergalactic scavenger hunt across the universe searching for the lost Cyber Planet Keys. The evil DECEPTICONS, villains unlike any you have seen before, are in a race against the heroic AUTOBOTS to recover the Cyber Planet Keys – keys that have the power to unlock the CYBERTRON planet itself, creating the greatest TRANSFORMER the universe has ever seen! The battle will span the galaxy in a race to wield the all powerful keys and save their home world of CYBERTRON from certain doom! 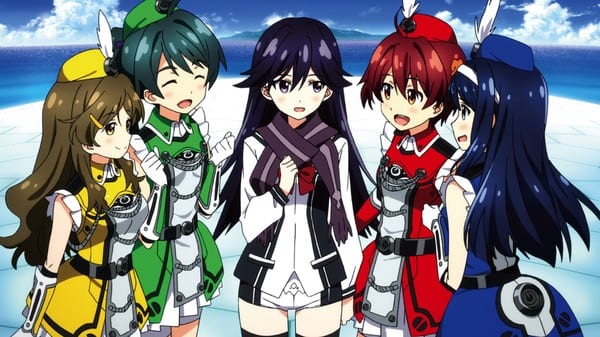 On an artificial island, Akane Isshiki, an innocent 14-year-old girl, lives a simple but happy life with her level-headed little sister Momo and their genius inventor grandfather. On clear days just over the water, everyone on the island can see the revolutionary invention that solved all the world’s energy problems, the Manifestation Engine. Thanks to the Manifestation Engine, the peaceful days that everyone had dreamed of had arrived.

But suddenly, a mysterious enemy called the “Alone” appear out of nowhere aiming to attack the Manifestation Engine, jeopardising their quiet way of life. Equipped with incredibly powerful Palette Suits designed by her grandfather, Akane and her friends must rise up together in this desperate situation. Their friendship is the only hope to save the world. 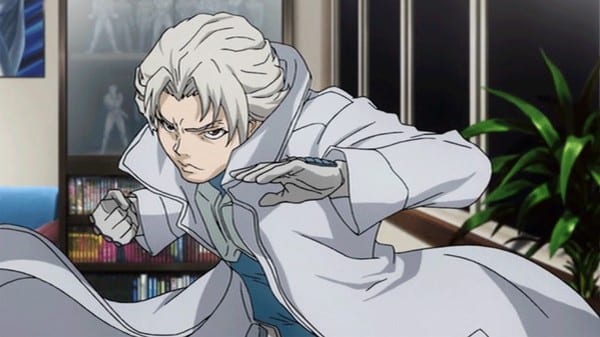 There are two forces in the world: the Zet, who are entrusted with the survival of humanity, and the Alphas, who have chosen an extreme form of justice. In a certain city, Jin lives under a bridge with an old man, struggling to pay off debts. He carries the destiny of humanity’s survival. Kouga lives on a hill and stands to inherit vast wealth. In his admiration for heroes, he seeks out the meaning of justice. They don’t know it now, but they are destined to one day meet.