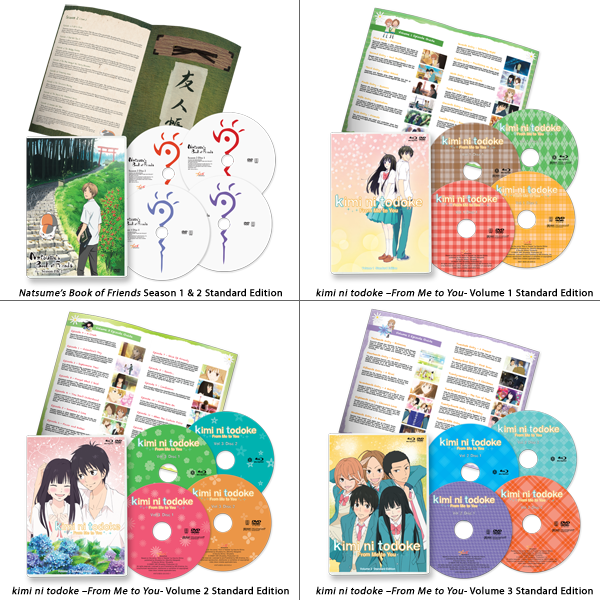 If you have been finding Nippon Ichi Software America’s Premium Edition pricing to be a tad too costly for your budget, you will be glad to know that the anime publisher have confirmed four new titles for release in North America from the 4th February 2014 based around two franchises – the first two seasons of Natsume’s Book of Friends in one collection and the three seasons of kimi ni todoke -From Me to You- across three volumes.

While none of these sets will come with the flashy hardcover artbook or art box that their premium releases do, it does come with a nifty story guide that while simple is better than nothing. All on-disc content however will be retained. These can now be purchased through the official NIS America online store, Rightstuf.com and other anime distributors.

Natsume has always been an outcast because he inherited his grandmother Reiko’s ability to see yokai (strange beings that are invisible to most people). After moving to his grandmother’s hometown and accidentally releasing a yokai who was imprisoned in a Lucky Cat statue, he learns about one of his grandmother’s keepsakes, her “Book of Friends,” which contains the names of the yokai she defeated, and allows its wielder to command the yokai named within. Since then, his life has gotten much more hectic, and yokai now visit him on a daily basis, seeking to either get their names back or take possession of the Book of Friends.

Sawako Kuronuma has had a difficult time fitting in. Some say it’s her jet black hair, others say it’s her hushed manner of speaking, while still others claim it is due to her name’s similarity to Sadako, a character from a popular Japanese horror series. On her first day of high school, Sawako meets the one boy who treats her like a normal girl – Shota Kazehaya. Through his selfless aid, Sawako slowly learns to come out of her shell and even begins to make friends for the first time in her life.