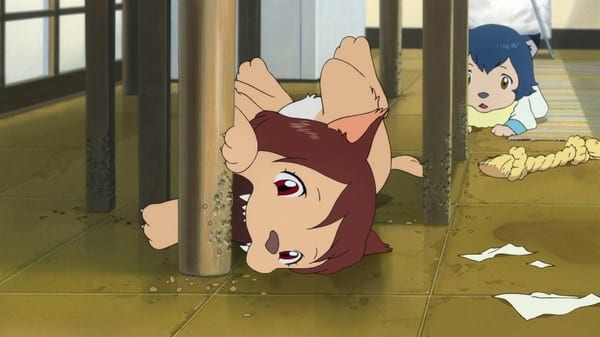 It is not uncommon for parents to describe their children or a group of children as being a pack of wild animals or being “little monsters”, and seeking to do a story about raising children this is what led legendary Japanese film director Mamoru Hosoda to come up with the concept of Wolf Children*. After originally watching this film as part of the Gold Coast Film Festival only hours after interviewing Mr. Hosoda himself, I am ecstatic to see that the anime feature film has now been released on DVD and Blu-ray around the world and finally being able to write up this review of the film. What I will say from the outset however is that while he has had a number of really good films over the years, Wolf Children takes the cake as his finest release to date!

Wolf Children follows a young woman by the name of Hana, who during one of her university classes meets and falls in love with an unnamed and mysterious man who eventually reveals himself as being a wolfman. Undeterred by this, the two form a relationship and give birth to two children – Yuki and Ame. Tragically the father is killed in a rather saddening way, leaving Hana to raise these two half-human, half-wolf children to the best of her ability. The outgoing Yuki and the shy / timid Ame are two completely different children who struggle with their uniqueness differently – and this story is essentially about how she helps them decide what path they should take in life.

The film takes two different storytelling paths: the first deals with Hana as she tries to raise the two children while attempting to hide their identities (Which especially in their younger years can become volatile) from everybody else while ensuring they have a normal upbringing. The second path surrounds Yuki and Ame themselves as they try to determine their own identities which leads them to question if they should live a normal human life or the normal wolf life in the wild. Wolf Children is more than a series about raising children and the trials of motherhood, it is about struggling to find an identity and how far a mother can go to ensure their children’s happiness. While there are other plot events throughout the episodes, many are only incidental and highlight one small section of their lives together. 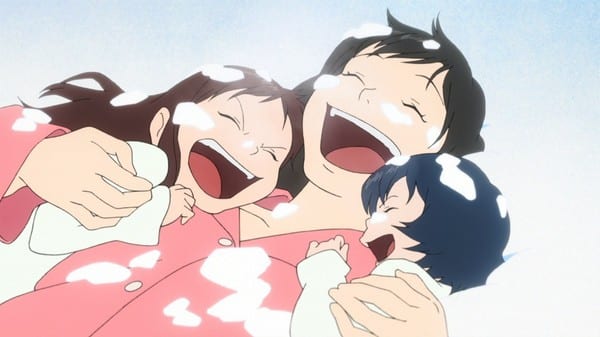 If there is one disservice to the film, it was that the narration is done by an older Yuki after the events of the film take place. While not necessarily a terrible decision, I feel it would have been much better if the incite and emotions were provided by Hana who had dealt with both “Wolf Children” from birth, and could have provided more in-depth narration given her direct experience. This is especially prominent during the final few scenes involving Hana and Ame exclusively.

The biggest issue I had with the film however was with one of the earlier trailers which claimed that this was a heart warming film. Without spoiling too much I didn’t feel this was the case, and unlike other films by Mamoru Hosoda I felt like this was his most sorrowful and depressing to date, although this could easily be a matter of perspective. There are many heart warming moments in the early years – from the trio frolicking in the snow, becoming friendly with the villagers in their rural village and Yuki finding love for the first time. But especially with the plot surrounding Ame as he struggles to separate his human and wolf personae and the conclusion felt depressing and I will admit that I was in tears the first time watching it.

While Mamoru Hosoda might not have perfected the “scenery porn” element as Makoto Shinkai has in recent years, Wolf Children looks particularly stunning and is well worth investing the extra money into for a blu-ray copy. While it lacks any unique visual style such as the quirky pop-art visual styles in the world of Oz, the film is a little bit above the standard set by Summer Wars’ real world visuals – and with less named characters, more attention seemed to be put into refining the characters to look as detailed as possible. Wolf Children is designed to look more realistic with a strong use of colour and attention to detail. Mr. Hosoda / Studio Ghizu / Madhouse also provided us with some wonderful cityscapes and rural countryside to look at, which look particularly stunning during the bursts of rain or snow that appear throughout the film. 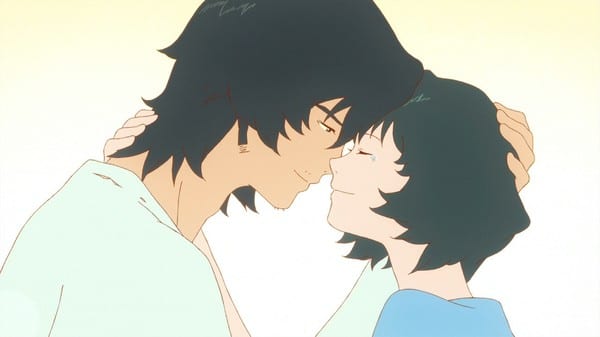 Comprised of several lyrical and instrumental tracks, the musical backing incorporated into Wolf Children is strong and and carries across the lighthearted and emotional scenes of it across nicely. The highlight was the lyrical song Okaasan no Uta (Mother’s Song) that was performed by Ann Sally with instrumental backing by Takagi Masakatsu but most impressive – lyrics written by Mamoru Hosoda himself. The song is beautiful and suits the theme of the film well. It is one of the few songs I would most probably sit through the credits roll and listen to in full.

Maybe it is because I have heard the voice actors / actresses so many times over the past couple of months, but I much prefer the original Japanese voice track to the newly produced English one. That being said, the English dub isn’t bad at all, with highlights including Colleen Clinkenbeard as Hana, Micah Solusod as adult Ame and Lara Woodhull as child Yuki who managed to pull off a realistic voice for the characters age bracket. While both English and Japanese voice casts should suit your requirements whatever your preferences are, much of the film tries to rely on visuals and music rather than dialogue to set the scene.

Wolf Children comes in a nice little slipcase that Madman Entertainment in the past have only reserved for their major animated film releases, and in the cover also featured an adorably cute postcard which I assume most would never consider using for a second.

Considering that the commentary itself is almost two hours in length, you should get at least double the film’s runtime in bonus on-disc extras. 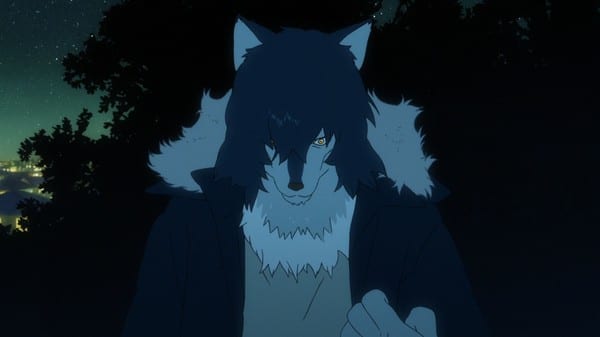 Especially after watching so many fantasy and action anime series as of late, Wolf Children was a refreshing and emotional release that should appeal to the wider market of film fans. He clearly identified the purpose of his storyline and delivered it to perfection, even if it may not be the heart-warming tale that I was initially led to believe it was. With high production quality in tow, this is easily one of the top films I have watched this year – and will be a strong contender for my Australian Anime Release of the Year 2013.

With Hayao Miyazaki supposedly stepping down from his role as a film director this year, the task lies upon director’s such as Mamoru Hosoda to fill such big shoes – especially with him being one of the few being heralded by some as the “Next Miyazaki”. While it is too early to tell just how big a mark he will leave at the end of his career, I am very excited to see what is in store next!

Also don’t forget to check out my review of the Wolf Children Ame and Yuki: Official Book, a fantastic Japanese guide to the film and the design process that went into it. While no localized release is planned for it yet, might be worthwhile hounding Udon Entertainment for it after their recent release of the Summer Wars Material Book.