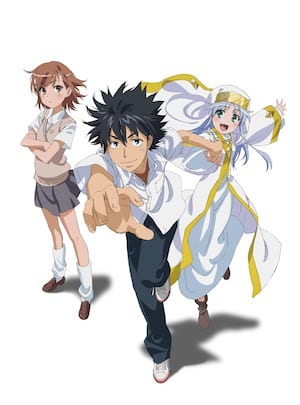 Residing in Australia it is quite weird to hear anime publishers talk in terms of “simulcast rights”, “home video rights” or anything along those lines – as here most titles pretty much go straight to home video release.

While no home video release date has been confirmed as of this point (Assumingly pending the production of an English dub), Funimation have confirmed that online streams will begin for their subscribers on the 14th January 2014 and for non-paying fans on the 31st January 2014.

Over here in Australia, the rights to both Magical Index and Scientific Railgun belong to Universal Sony Pictures Home Entertainment, with a representative from the company claiming that both titles have been their best selling ones to date in a The Otaku’s Study exclusive interview.

Kamijo is a student in Academy City, where people use science to develop supernatural abilities. The guy’s got a lot of heart – luckily for a young nun named Index. She’s on the run from a sorcery society that covets the astonishing 103,000 volumes of magical knowledge stored in her memory. When Index stumbles into Kamijo’s life, she find a faithful friend and protector, and while Kamijo’s easily the weakest kid in Academy City, he’s got something else going for him: the Imagine Breaker, an unexplainable power stored in his right hand that negates the powers of others. With scientists and sorcerers attacking from all sides, the Imagine Breaker will definitely come in handy – but it’s Kamijo’s loyalty to Index that will be his greatest weapon in the fight to keep her safe.

Facebook
Twitter
ReddIt
WhatsApp
Pinterest
Telegram
Previous articleTwo New Sequels to The Legend of Heroes: Trails in the Flash Announced for 2014
Next articleFunimation Release Lots of Digital Goodies for Fairy Tail as Part of “12 Days of Anime” Series