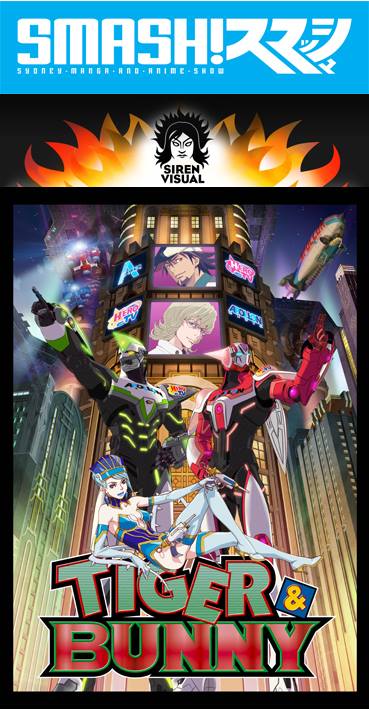 With SMASH! Sydney Manga and Anime Show set to be held this weekend, all of the anime companies in Australia are pitching their special events and other goodies to be available during the show. Siren Visual have today showcased what fans of their titles can expect at the event, including the appearance of the voice actor from one of their most popular titles during 2013.

Masakazu Morita has had quite a number of voice acting roles over the years, and for Siren Visual one of his more notable roles is of Barnaby “Bunny” Brooks Jr. in Tiger & Bunny that was released over two installments a few months back. According to the SMASH! timetable he is to have hour long signings at 10:30 and 3:00 in the JPF Signing Room as well as a panel at 12:00 on the main stage.

Unlike many anime conventions in Australia, it seems like each Siren Visual, Madman Entertainment and Hanabee will have their own screening rooms – with some crossover to take into consideration panels to be held throughout the day in each of them. For Siren Visual they will have the following screenings:

As always, Siren Visual will have a range of their new and old releases available for purchase at the event. They have mentioned that they will have copies of both the Higurashi no Naku Koro ni Kai collection as well as some “very cool” advance copies of their Shiki box set.

If you are after something a bit different, I recommend Dennou Coil which walked away as my Australian Anime Release of the Year 2011.