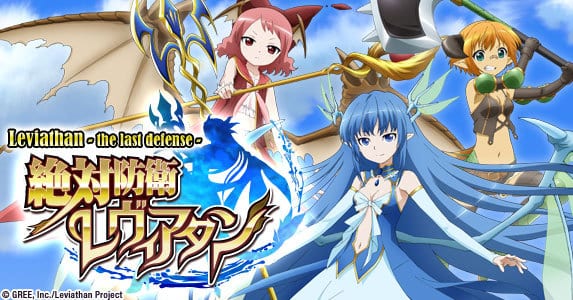 Sentai Filmworks announced this anime acquisition with a question… “Can three long girls turn the tide of an alien invasion?”. Thats right, the North American anime publisher Sentai Filmworks have announced that they have acquired the rights to anime series Leviathan ~The Last Defense ~. Based on a new mobile game launched in Japan by the global mobile social company GREE (Under the name Zettai Boei Leviatan), this 13 episode series is directed by Kenichi Yatagai and features character designs by Takaharu Okuma (Kotoura-san) with series composition by Yasunori Ide (Hanaukyo Maid-tai), sound direction by Yosuke Morita and music by Shiho Terada (Inazuma Eleven GO) and Tomoki Kikuya (Hidamari Sketch).

A home video release is set for sometime next year (Although unspecified if it will be a Hybrid Dub or Japanese dub-only release) but episodes are set to be run via digital services such as Anime Network who are to begin airing new episodes every Saturday from now.

There lands of Aquafall were a paradise, where water flows freely, the hills are covered with lush vegetation and life in all forms flourishes in peace and abundance.  That’s before the meteors began to fall, each impact spawning new, hideous monsters.  It soon becomes clear that there were others who want to claim the entire green world for themselves.  An enemy that will not stop until everything has been vanquished.  Fortunately, the fairy Syrop is on guard and knows exactly what to do.  Working quickly, she recruits an extraordinary team of young women to form the base of the Aquafall Defenders: the incredibly strong Jormungand, the rich Bahamut and the stoic Leviathan.  But can three lone girls really turn the tide of an alien invasion?  The scales of fate hang in the balance in Leviathan ~ The Last Defense~!