acttil (A company whose name stands for acceptance + creativity + teamwork + trust + innovation + love) formally opened their doors last month, run by a team of former staff members from Nippon Ichi Software America while still carrying across the companies love of video games and anime. While given their roots you may have been expecting their very first announcement to be based around a video game…. but instead their first announcement is for a rather intriguing collectors edition for Little Witch Academia.

This is an 26-minute anime film of newly formed animation studio TRIGGER and has to date only been available as a digital format. This collector’s edition will be the films very first physical release to the international market and will include the entire film on a blu-ray disc, an original soundtrack CD and a 112-page artbook which will be available for purchase a little later on this year (Summer 2013 in North America). Little Witch Academia was produced by TRIGGER as one of the four titles for Anime Mirai, the Young Animator Training Project, whose purpose is to inspire, train, and energize young animators in the Japanese anime industry. After showcasing the trailers and full episode of Little Witch Academiain the Spring of 2013, not only was it well-received in Japan, but it has also become a surprise hit with anime fans in the West. 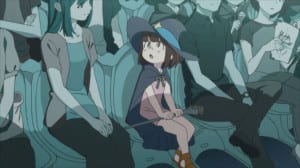 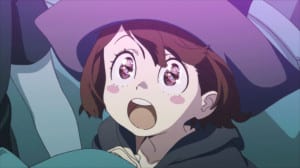 For those who are going to be attending this years Anime Expo 2013 in Los Angeles, the script writer for the film Masahiko Otsuka will be making an appearance and holding a panel. He will also be attending a Little Witch Academia Fan Event held at the JW Marriott Los Angeles on the 6th July 2013 from 2PM. The fan event, including the screening of the making-of video and a Q&A session will be open to just a mere 50 fans. For information how to be one of the lucky 50 – visit the series official website HERE.

Akko Kagariis an ordinary girl who joins the renowned witch academy for witch girls, Luna Nova Academy. When she was younger, she went to Magical Festa, a magic show hosted by a witch named Shiny Chariot. Akko was so mesmerized and inspired by Shiny Chariot’s performance that she dreamed to someday be a “cool” witch like her. This young and impressionable Akko takes Shiny Chariot’s words as her own motto: “Never forget, a believing heart is your magic.“ As part of a class, Akko and her classmates go into a labyrinth under the Tower of Luna Nova. There, a sealed ancient dragon was unleashed by one of her classmates. Akko tries to stop the dragon, but… 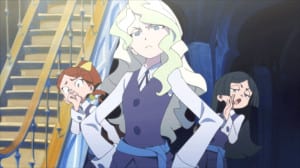 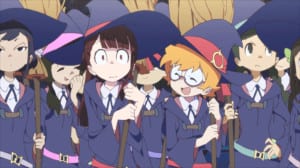