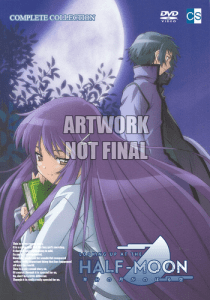 It turns out that a brand new anime publishing company has entered the North American market. Crimson Star Media have confirmed that their very first anime acquisition is Looking Up at the Half Moon, also known as Hanbun no Tsuki ga Noboru Sora / 半分の月がのぼる空 in Japan. Based on the light novel by Tsumugu Hashimoto, this six episode series is directed by Yukihiro Matsushita (Maria Watches Over Us), and features character designs by Mitsuru Ohara (Peach Girl), music by Shinkichi Mitsumune (FLCL, Rozen Maiden) and animation by Group TAC (Black Blood Brothers, Gilgamesh

Crimson Star Media are soon set to begin streaming via their official website with an official release on DVD planned for the 27th September 2013. Without online streaming this release will set you back $29.99 while with online streaming the title will cost five dollars dearer at $34.99.

Yuuichi Ezaki was recently diagnosed with Hepatitis A and admitted to the hospital to recover. One day after sneaking out, he returns to the hospital only to be confronted by the head nurse, Akiko. Later that same day while on the rooftop, Akiko makes a deal with Yuuichi. She will overlook his sneaking out of the hospital in the future if he will befriend a new patient at the hospital. The girl, Rika Akiba, has just recently been moved into the hospital to get the proper care for her serious heart condition. What ensues is a friendship that grows into something more as Yuuichi and Rika begin to bond looking up at the half-moon.