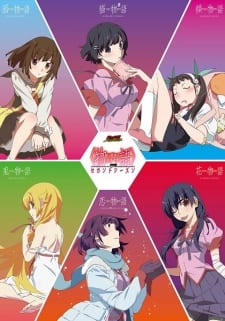 It is good to see that even in a week dominated by gaming announcements at the annual E3 expo, that the international anime companies still have announcements to provide some balance and freshness. The latest announcement comes from Aniplex of America right off the back of their releases of Bakemonogatari and Nisemonogatari.

The company have today confirmed their acquisition of both the Monogatari Series Second Season which will begin its international streaming just hours after airing in Japan. Immediately following the events in Nisemonogatari, the second season of the Monogatari Series is a collection of stories featuring the entire Monogatari cast. With so many questions left unanswered from Nisemonogatari, what will Koyomi Araragi, Senjyogahara and the others get into next?

This is not the only announcement, have they have also confirmed that Nekomonogatari Black will begin streaming over the next couple of months. Originally airing in Japan this past December, Neokomonogatari Black is set as a prequel to Bakemonogatari and Nisemonogatari. Of course, both of these releases will eventually be released on disc, although Aniplex are remaining tight lipped on just when they could be released.

Hideki Got | President of Animation Business of Aniplex of America

The Monogatari Series is a very popular title with a fan base that continues to grow. With the intriguing story leaving fans wondering what will happen next, we look forward to giving the fans the opportunity to watch the Monogatari Series just hours after it airs in Japan.

Australian anime publisher Hanabee Entertainment have yet to confirm their acquisition of both titles yet – but I smell more bookstyle packaging collections around the corner.