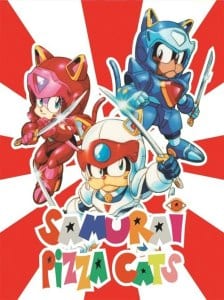 While I am not sure if you will call it the longest requested series for Madman Entertainment to license (I think a full release of Sailor Moon might JUST overtake it), Samurai Pizza Cats has been a much demanded anime acquisition for the Australian company for some time, and it turns out that the requests have finally turned into fruition. At their panel during the Melbourne Supanova: Pop Culture Expo, the company took to the stage to announce their acquisition of the series.

As I wasnt at the expo today I am not sure if it is for the subtitled or dubbed editions (Both are considerably different in content) – both of which I believe are being released in North America… but this is definitely positive news for fans whom grew up watching it – like other recent anime series releases including Digimon: Digital Monsters and Cardcaptor Sakura.

The setting is a Japanese looking village named `Little Tokyo’ where the Pizza Cats run a pizza fastfood business. Little Tokyo is populated by all kinds of animals. The official governor of the town is the Emperor, but since he has gone bananas a council takes care of the well-being of the village. One of the members of this council is called Seymour “Big” Cheese, who secretly wishes to take over control of the village. The pizza take away restaurant is merely a cover for their true job… Whenever evil is afoot, the Pizza Cats are launched towards the danger from the gun-lookalike clock tower that emerges from the top of their restaurant.